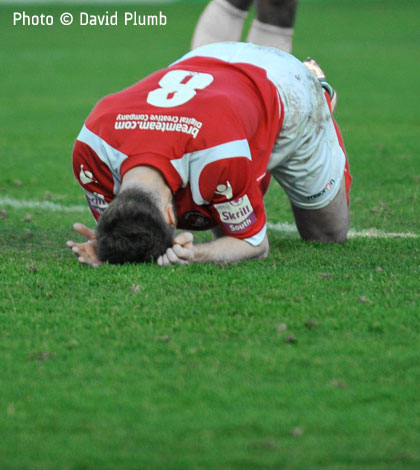 Fleet’s Wembley dreams were scuppered on the south coast where a second-half goal from Havant’s impressive Nigel Atangana was enough to separate the sides. And with a late Billy Bricknell strike ruled out for offside, it was a day the visiting players will have to quickly get out of their systems as they face another Hampshire trip in the league – to Farnborough – on Tuesday night.

Steve Brown made three changes to his side, Michael West making a second ‘debut’ in place of Michael Corcoran, while Daryl McMahon and Michael Thalassitis replaced Joe Howe and Ben May.

As expected, the Havant pitch was fairly treacherous underfoot but the bright weather meant the home side had no problems putting the game on and Fleet made a bright start, McMahon’s early free-kick just off target. But the home side were full of running and they soon settled, showing plenty of pace and guile in the Fleet half. Top scorer Sahr Kabba forced Preston Edwards into the first save of the match on five minutes and two minutes after that, the tricky Christian Nanetti bent a free-kick just past the upright. Atangana then placed a header inches wide as Havant continued to press.

But Fleet’s best chance of the half came on 17 minutes when an excellent through ball from Billy Bricknell found West racing through but he skewed his shot wide as a full-back put him under pressure.

A mid-half lull was broken by Havant as Scott Jones whipped in a fine cross that Paul Lorraine let run across goal and the ball just skipped past Dennis Oli who only had to touch the ball past Edwards. Fleet came roaring back and Anthony Cook floated one in that goalkeeper Scott Bevan intercepted before West could pounce and then the giant No.1 turned a well-struck Dean Rance effort from distance around the post.

It was end-to-end stuff but without much end product and Havant had the next opportunity on the half-hour mark, a goalmouth scramble seeing Kabba’s strike cleared off the line by Osei Sankofa before Palmer headed clear another chance from Atangana.

The home side closed out the first half strongly, but Fleet got to grips more in midfield after the restart – sadly without any reward. A rather fragmented opening period was enlivened only by a West free-kick that ran long past the post and Kabba firing wildly over at the other end.

But the lull proved fatal for the Fleet just past the hour mark as their concentration faded just enough to let Havant in.  A Nanetti corner was floated across and an unmarked Atangana met it with a crisp finish at the near post that deflected off a Fleet player and beat Edwards to put the home side on course for victory. West fired a well-positioned free-kick into the wall as response but that was to be his last contribution and as he tired, Brown replaced him with Alex Osborn.

Cook’s appeals for a penalty went unheard after a bout of shirt tuggling left him on the ground and Fleet thought they were back in it on 80 minutes when McMahon’s subtle free-kick was tucked away nicely by Bricknell but the linesman deemed the striker offside and the cheers of the visiting fans turned to groans. Fleet kept pressing against a nervy Havant, though the home side broke well on several occasions and could have been 2-0 up and home and dry, Sessegnon having to hack clear one effort from inside the six-yard box.

Aiden Palmer rather sliced at a shot with only the goalkeeper to beat while a free-kick went over the bar and May fired wide as Fleet continued to bare their teeth but it was all to no avail as Havant held on to progress to the last eight and leave Steve Brown’s men with the proverbial “concentrate on the league” ringing in their ears.

Ed Miller has been Ebbsfleet United's communications manager and programme editor since 2014 and responsible for the club website since 2007. Contact him on ed.miller@eufc.co.uk
PrevPreviousFleet boss to use players’ pain as he aims for last-eight berth
NextBrown gives official benefit of the doubt over offside decisionNext