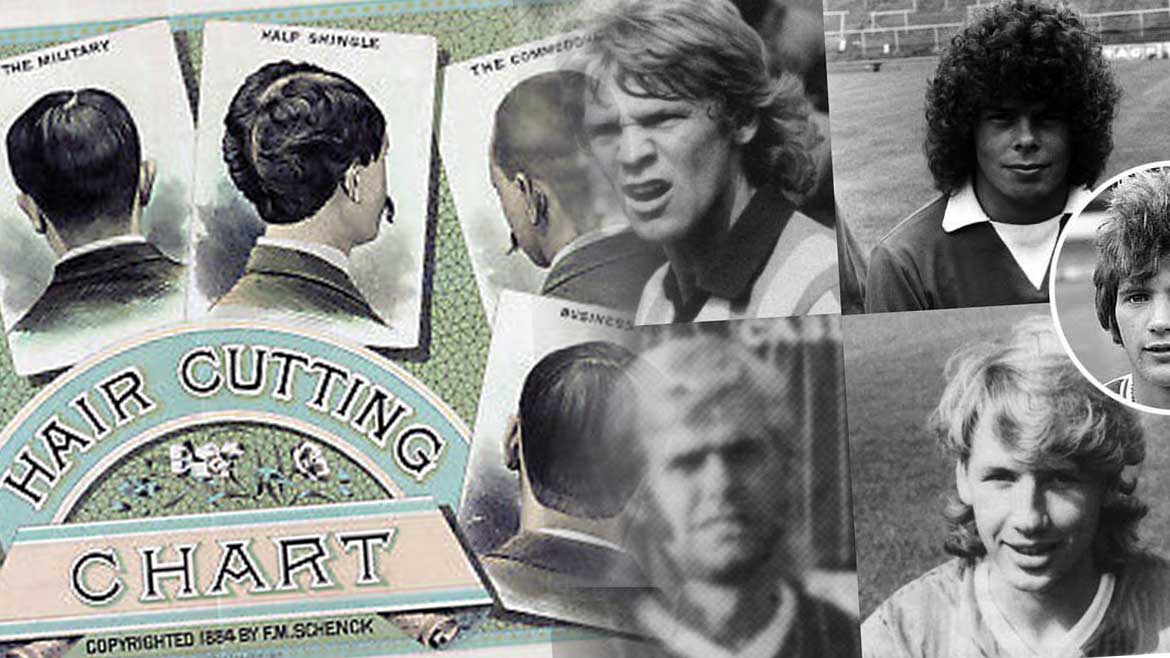 As we still await the go-ahead for a new football season, the wider lockdown is easing, including a re-opening date for the hospitality sector and hairdressers.

So what better way to celebrate the end of lockdown haircuts than a look back at Fleet styles through the ages! Having emerged from lockdown with Daryl McMahon-circa-2013 long locks, will you be going for a vintage Jimmy Logie-style Brylcreem look or opting for something more up to date like a Jordan Holmes man-bun to keep the extra growth contained?

There was no messing about in the old days – the odd Victorian-era moustache, a smart middle parting for the most part, brylcreemed-down at either side and only Bill McEwan’s wavy top or Jackie Bridge edging towards rockabilly in the late 1950s deviating from the norm. Bill Whatley’s severe side shaving returned to vogue with Joe Howe and Tom Phipp in 2013 (see below).

Surprisingly, there are no Beatles-style moptops in the Fleet archives from the Sixties but we can see with a young Harry Easton and John Tank that the kids’ hair is becoming a lot more unruly. Cameron, Skingley and even Barry Fry (when he had hair) are clinging on to the late Fifities’ Teddy Boy look, while John Roche is clearly channelling a Krays vibe. Alan Crudace’s look is ahead of his time with an 80s hairspray direction going on while McAlpine could be a shoe-in for a glum Nineties-era Britpop band. Meanwhile, veteran Harry MacDonald – who joined the Fleet in the Fifties and played on through the early 1960s – is having none of it and is maintaining a strictly old-school barnet.

Now we’re in business. If ever there was a dry run for the lockdown’s lack of available barbers it was the 1970s. As O’Sullivan and Brooks experimented with leaving it a bit longer at the back in the early Seventies, there was no stopping the likes of Burrett and Constable who took the wildman look to heart. Burrett, who played in 500+ games across all competitions and floodlit cup matches, was synonymous with the Fleet hair era, although his partner in crime Brian Woolfe gave it a good go as well, but a receding hairline meant he had lost most of it by 1979. Elsewhere, the Fleet could lay claim to future England boss Roy Hodgson’s mutton chops; striker Dave Bostock’s Donnie Osmond tresses; and the coming of the football perm expertly modelled here by Pip Jeffrey and our future goalkeeping coach Ron Hillyard in his Gillingham days. In between them, we’re not sure where to pigeonhole Tom Watson’s sharp cut – is it Seventies, is it New Romantic, is it Nineties New Wave? Answers on a postcard.

The Eighties – mullets and hairspray

A wide array of styles on offer in the top row – Geoff Idle’s mullet was somewhere between the end of the Seventies and the beginning of the new decade, which coincided with his Fleet career. It’s perhaps a bit unfair to include Mark Penfold’s truly memorable perm here as it was from his Charlton days in the Seventies and his hair was considerably shorter when he won promotion with the Fleet in 1988/89… but by the same token, how could you possibly ignore it?! Irish international Damian Richardson is exactly how your dad’s hair was in 1983 while Aldous, a big fan of various longer hairstyles down the years, models this slightly sleeker wavy Eighties version here.

By the time we get to the bottom row, however, the Eighties blonde hairspray mullet – beloved of big rock bands of the time like Europe or Def Leppard – is firmly in evidence and we include future midfielder Ian Docker here from his Gillingham days. Though in former Everton man and short-lived Fleet striker Whittle’s case, we’re not sure he’s quite pulled it off. The inclusion of current director of football Steve Lovell here is merely to offer a contrary view, the then Crystal Palace forward eschewing the mullet for a ‘long on the top’ style.

The Nineties – a right mish-mash

The Nineties – when clearly anything counted. Assistant player Peter Coffil brought the beard back after a long absence from 1992 while goalkeeper Fearon, player-manager and current director of football Lovell and curly Jimmy Bullard were still clinging on to an Eighties mullet vibe. Roy Parkyn, meanwhile, was one of the few long-haired players of the era with the then-brave decision to tie his back in a ponytail – there weren’t many of those to the pound in the Beazer Homes League!

Youngsters Nicholls and Hunt, later joined by Honeyball, went for the ‘curtains’ style made trendy by both lightweight boybands and indie darlings of the time, while blonde highlights were also still occurring, here best evidenced by Docker, Spiller and Gubbins. The Nineties, of course, heralded the Britpop era when Northern bands like Oasis combed down their fringe and gelled it to their foreheads for no reasons – step forward Reynolds, Smith and Dimmock.

The inclusion of record appearance holder Jimmy Jackson here isn’t really for his hairstyle but more because the ever-present Jacko’s hair was the one constant throughout the decade – never changing, always reliable.

The Noughties – pass the bleach

It seems there was only two options in the 2000s – chuck a load of bleach on your head or shave it all off. Striker Akpo Sodje started the hair-dye movement but must have read the label wrong as his reddy-orange hue failed to catch on. Spiky and highlighted was the trend after that with Protheroe and Skinner indulging, while QPR loanee Walshe took the spikes to the absolute extremes.

It got ever blonder after that with Opinel’s Wembley barnet bordering on yellow – one of many hairstyles the fiery French full-back® experimented with while young defenders Collins and Salmon made it impossible to tell them apart by growing their Beach Boys surfer locks over their faces as they lined up on either side of the penalty box. We include Michael West’s first Fleet profile pic here just because it’s so carefully hairdryed and tidy!

Meanwhile, midfield generals McKimm and Saunders were having none of that nonsense and opted for a Roy Keane-esque gleaming but menacing look, adopted by plenty of others in the 2000s.

Bang up to date we come with these cutting-edge styles brought to you by the years 2010-19. The ever-popular ‘short back and sides’ look was taken rather too literally around the sides when Liam Bellamy, Patrick Ada, Moses Ashikodi, Tom Phipp and Joe Howe took the clippers to either ear. Still, very tidy and a throwback almost to the 1930s again.

Play-offs goalkeeper Daren Hawkes has got the Nineties Britpop look down to a tee perhaps 15 years too late while the ‘classic Macca’ only lasted a short time before he took the scissors to the long mane and experimented with various other styles in his time as player and manager. Kenny Clark is here for no other reason than as an inspiration to follicly-challenged men, the defensive favourite going from no hair to a finely coiffured style in a suspiciously short period of time.

From 2016 onwards, the Fleet kitbag started to hold more hairspray than even the 1980s as players’ swept-back barnets began to flourish. Matt Fish has gained commendable altitude with his comb and spray but the true master was Sean Shields whose hair got ever higher and more sculpted with each passing season. He combined it with a beard as the penchant for facial hair returned with a bang in mid-decade. Dean Rance attempted to channel the Shields look towards the end of his Fleet career, and it was a decent attempt, but literally never got near the heights to topple the master.

Finally, last season’s squad. The beard was still much in evidence courtesy of John Goddard and Jamie Grimes (who also brought the hairband and long-hair look back) but the true aficionado was Ayo Obileye. An ambassador for men’s grooming service A Fuller Beard away from the pitch, Ayo took beard-modelling to unprecedented lengths and truly wore his like no other in club history.

Which leaves only manbun champion Jordan Holmes. The Aussie goalkeeper has gone from short-haired youth at Bournemouth to entertainer of many a hairstyle at the Fleet. We’ve had blonde locks from the Eighties, hairband from the Nineties and of course the manbun that in lockdown has produced a Holmes lookalike competition amongst the fanbase.

To all the Fleet hair heroes of the past 120 years, we salute you all and hope to see the various styles recreated by supporters when they venture out for that first haircut post-lockdown.

Ed Miller has been Ebbsfleet United's communications manager and programme editor since 2014 and responsible for the club website since 2007. Contact him on ed.miller@eufc.co.uk
PrevPreviousThe boys of summer – Part 3
NextThe year it rained goalsNext