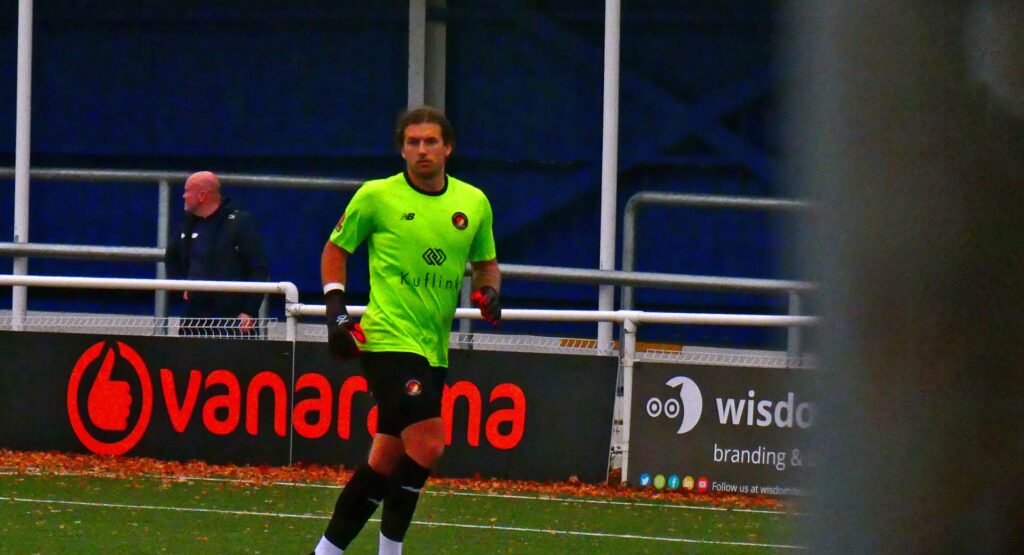 Gut feeling rather than homework for Holmes

Jordan Holmes saved yet another penalty in an Ebbsfleet shirt yesterday to add to his growing collection.

The goalkeeper’s first season for the club in 2019/20 was memorable for a number of penalty saves and others sent off target and Holmes was more than equal to Jake Robinson’s effort yesterday to continue his record.

And he puts his penalty stops down to instinct rather than any homework on opposition strikers.

“There’s not a lot of background information on the lads [taking the penalties], to know which way they go consistently,” said Holmes. “It’s more of a gut feeling. Once you see it, once you have a side in your head, commit to it and hopefully it goes with you and you make the save.

“It’s a bit of a weird one since I joined Ebbsfleet last season, I’ve happened to save a few. There’s no real knack to it, it’s just a feeling of confidence. When I’m in there, I’m always imagining I’m going to save the penalty and thank God today I did save it. But it was a great performance from the lads just to hold on at the end and get the result and three points.”

If the penalty save in the first half was crucial, Holmes’ outstretched leg to keep Shamir Fenelon’s effort at bay in the second was just as important.

“Their guy’s turned on the edge of the six-yard box, I’ve dived to one side but he’s tried to wrap it across me and I’ve been lucky to get a foot out and put it away to safety,” the Fleet goalkeeper recalled. “It was a scramble in the box but we were fortunate it was just one of those days that I kept making saves.”

The defence in front of Holmes was reshuffled at half-time, with Will Wood coming on to slot into the right-back role and Tobi Adebayo-Rowling moving inside and for the goalkeeper, whoever has come into the back three or four as a result of suspension and injury has done a job in there.

“There’s a lot of personnel changes,” said Holmes of the enforced alterations to the Fleet defence. “But when we have anyone that’s asked to defend and roll their sleeves up and get involved, they all do. And I couldn’t ask for anything more than that performance in the second half, especially the defending.

“It was a tough game with the wind and their physicality, lumping the ball. It made us dig in and really have to earn the result. We’ll be honest, we’ll be the first to say we didn’t play as good as we can but it was great defending in the end and that resilience to hold out and get the win.”

As well as back-to-back wins for the Fleet, it was back-to-back appearances for the Australian U23 keeper – but there’s no suggestion of competition among the club’s goalkeepers as they both continue to gain game time in the starting eleven.

“Me and Hads get on really well and Scott [Chalmers-Stevens], the three of us we enjoy training and support one another,” said Holmes. “If it’s me playing or Tom, we’re all in it for the results. If the gaffer feels Tom can get us the result or is playing better, then he plays. If the gaffer feels I’m playing better then I play. It’s nothing against either of us, it’s the gaffer’s decision. We have full respect for each other, Tom’s a great lad and I’ve got on with him really well.”

Ed Miller has been Ebbsfleet United's communications manager and programme editor since 2014 and responsible for the club website since 2007. Contact him on ed.miller@eufc.co.uk
PrevPreviousPlaudits for defence as boss demanded more from second-half
NextConcord land on December 8thNext