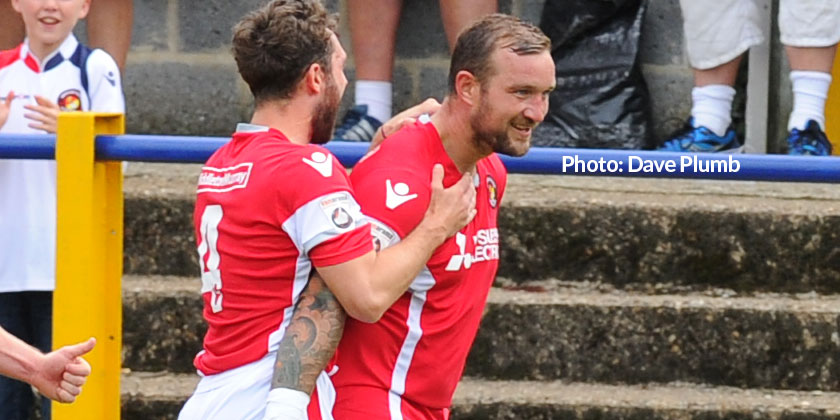 Fleet got back to winning ways after three games without a victory as they saw off sixth-placed Gosport Borough on the south coast.

And winger Danny Haynes got his long-awaited starting place as he was handed the shirt normally taken by John-Paul Kissock, who had to be content with a place on the bench.

Gosport included new acquisition Rowan Vine in their starting eleven, the former QPR forward – who was at Welling last year – having been signed after release by Havant & Waterlooville.

Fleet were bright enough in the opening stages, forcing several corners, but neither goalkeeper was forced to work. Haynes had the best opportunity of the first period when he stabbed a shot wide from Danny Kedwell’s knockdown. Brandon Hall did eventually get called into action to deny Vine but it was largely a match played outside both boxes.

That all changed in the 28th minute when Matt Godden sped clear of the home defence, who remonstrated furiously with the assistant referee for offside as the Fleet striker did well to finish coolly beyond Nathan Ashmore.

Both sides played a decent passing game in an encounter not dissimilar to the Margate game, but chances remained a premium with Fleet happy to take their goal lead into the break.

The second half began at a brisker pace and Rory Williams wasn’t far off for the home side before Haynes received a clever pass from Kedwell, attempted to the lift the ball over the advancing Ashmore but saw his effort hit the side netting.

Gosport always looked capable of scoring, particularly with Justin Bennett leading the line and the league’s top scorer punished the visitors on 53 minutes. The Fleet defence failed to clear their lines and the home side were allowed to play the ball in and around the box before a clearance fell to Bennett who got free and fired past Hall for the equaliser.

Having fallen victim to a quick goal response at home to Chelmsford, Fleet pulled one of their own out of the bag two minutes later.  Godden made headway down the flank, headed for goal and delivered inside to Kedwell to direct an effort from close range over the line.

Stuart Lewis then had a shot cleared off the line as Fleet looked to wrap things up, but the failure of that chance to go in made for a somewhat nervy finish as the home side were forced to go all out for an equaliser. Steve Ramsey fired one just over the bar as Fleet sat a little deep but the experienced defence soaked up what Gosport pressure there was and held them off to record their seventh away win from seven league games on the road.

McMahon and his troops will be looking to maintain that record and avenge the Chelmsford result as they travel to Essex once more next Saturday.