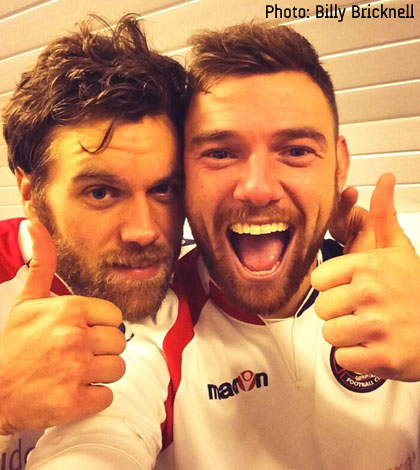 The Fleet negotiated yet another away tie and responded with the sort of performance that Steve Brown will have demanded after the aberration of Boreham Wood, picking up three points at FA Trophy finalists Gosport.

A shoulder injury ruled out Chris Sessegnon, while Yado Mambo was also missing with a knock, meaning Joe Howe and Osei Sankofa started, while Michael Corcoran and Billy Bricknell replaced Alex Osborn and Michael Thalassitis respectively. Gosport, not quite so fresh from Wembley as they’d played Tonbridge on Tuesday, recorded six changes from that game and started only six players from their historic showdown with Cambridge United at the weekend.

The visitors, mindful of their slow start at Boreham Wood, wasted no time in getting at the Gosport defence with Anthony Cook and Daryl McMahon central to some nice football in the middle of the field. A free-kick and a couple of corners in quick succession came to nothing, however, and Gosport responded, forcing Joe Howe into a hasty clearance behind his own goal. From the resulting corner, the bright Mike Gosney drew a save from Preston Edwards and then another low at the base of the post after a useful run from outside the box.

The game went to and fro for a spell, with Gosport dangerous when breaking into the final third, but Fleet soon got to grips with that and stamped their own mark on proceedings. On 18 minutes, quick thinking from McMahon opened up the Gosport defence for Bricknell and after his initial shot was blocked, Dean Rance’s follow-up was saved by Nathan Ashmore.

On 25 minutes, Fleet could have gone ahead with something of a wonder strike when Cook unleashed a free-kick from more than 30 yards that ricocheted off the crossbar. Ratcheting up the pressure, the visitors then went close when Bricknell’s shot had Ashmore stretching across his goal to push the ball just around the post. Those disappointments weren’t to last long, however, as Bricknell made it goal number 15 in the league on 31 minutes. A long punt upfield from Edwards presented itself nicely for the Fleet top scorer and as the defence failed to deal with it, he calmly picked his spot and drove it low into the back of the net for 1-0.

Eight minutes later and the Fleet had a golden opportunity to make it two. Cook began a neat move that ended with McMahon’s shot blocked but only as far as Ben May inside the six-yard box but he somehow scooped it onto the crossbar. And then a third chance to extend the lead came the Fleet’s way almost immediately, Bricknell on the end of a through ball but off target as he homed in on goal.

The second half didn’t quite live up to an exciting first period but it was nonetheless decent entertainment for the travelling fans. Cook again ignited the Fleet from kick-off, though was guilty of not spotting McMahon in a decent position when he broke down the right early on in the half. But Gosport were by no means down and out and after Anthony Acheampong gave away a free kick on 51 minutes, Adam Wilde sent a seemingly goalbound free-kick against the upright.

But Gosport goalkeeper Ashmore was still the busier of the two stoppers and he saved from May and Bricknell in quick succession as Fleet seemed eager to add an all-important second goal. It duly arrived on 56 minutes courtesy of a goalmouth scramble, with Cook, May and Bricknell all seeing efforts kept out before McMahon pounced on a pass back out to him and fired it home.

McMahon led Fleet’s charge for a third, attempting a lob over Ashmore and then delivering a nicely weighted pass for Bricknell which the goalkeeper was equal to. The Gosport custodian then kept out May’s turn and shot and was grateful Cook’s effort was just off target. That effectively ended the game as a contest, though Gosport pushed forward in search of something to show for their night’s work. But Fleet were in no mood to let their lead slip and comfortably navigated the final moments to extend their play-off comfort zone to eight points.