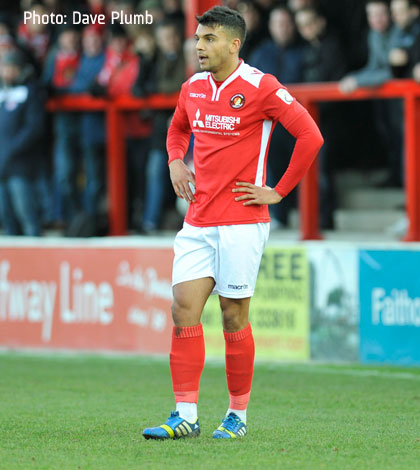 Getting a Gander at the new boys

Fleet fans will travel to Gander Green Lane in numbers tomorrow expecting a struggle to recognise at least half of their likely starting line-up after a week quite like none other at Stonebridge Road.

Having glimpsed Danny Kedwell and Stuart/Theo Lewis against Forest Green Rovers last week, there could be starts too for any of Adam Cunnington, Matt Fish and Kelvin Langmead while, of course, familiar faces such as Bricknell, Cook, Corcoran, Huke and Osborn will not be taking part.

And to add to the sense of ‘close-season’ unfamiliarity, Fleet’s last league game two weeks ago seems like a very long time past with fans and the manager as keen as ever to get back into Conference action.

What is key now, as Fleet boss Jamie Day reiterated once again on BBC Radio Kent this morning, is that this team hits the ground running. With 17 games left, Fleet are only a point outside the play-off zone but having played a game or two more than most of their rivals. Bromley, with two games in hand, could potentially open an 11-point lead over the Fleet while current leaders Boreham Wood, who have played two games more, enjoy a 13-point cushion.

The margin for error is small though if statistics are anything to go by, then Fleet are pretty much on a par with last season. We are just two points shy of our total at the same stage in 2013/14 when we trailed then-leaders Bromley by 19 points.

Tyrone Marsh returns to contention for a starting place after he was cup-tied last week, while Preston Edwards should continue in goal as Brandon Hall is punished for his sending-off against Basingstoke with a one-game ban. Anthony Acheampong completes a two-match suspension so the centre-back pairing is likely to be Clark and Langmead.

Sutton United haven’t quite hit the heights many were expecting this campaign, especially after their exploits of last season when only Eastleigh prevented the Surrey side’s remarkable run-in from culminating in automatic promotion.

Their pre-season odds for promotion were good and Fleet were probably surprised by the ease of their own 3-0 win over the visitors when Sutton came to the PHB Stadium in September. But many fans will remember Sutton’s convincing 3-1 win in this corresponding fixture last season and know that Paul Doswell’s team still contains plenty of individual talent that must hope to take advantage should the new-look Fleet fail to settle in their first fixture since the squad overhaul.

Sutton lie fourth from bottom and only four points clear of the drop zone after an increasingly indifferent set of results, culminating in last week’s 3-2 reverse at fellow strugglers Weston-super-Mare. They have drawn six of their last 11 games but for all their troubles this season, they don’t lose games by particularly large margins and will be difficult to break down.

The home side will likely have ex-Woking goalkeeper Aaron Howe between the sticks having signed him in midweek, with Alan Julian having had to settle for a place on the bench recently. Former Forest Green midfielder Jamie Collins has also joined the club for Eastleigh and a name we might remember – Dan Wishart, who scored Hayes & Yeading’s winning goal at the PHB Stadium earlier this season – was also snapped up just before Christmas.

Sutton have moved players on since our last meeting so Charlie Clough, Kane Haysman, Jo Kuffour, Jessy Reindorf and Matt Lockwood will be absent. The home side will also be without injured quintet Kevin Amankwaah, Callum Hart, Dale Binns, Bill Medlock and Jamie White while on-loan Fleet defender Chris Sessegnon is unavailable. Defender Louis John, who appeared in a county cup defeat to Merstham, returns after a long lay-off.

Ed Miller has been Ebbsfleet United's communications manager and programme editor since 2014 and responsible for the club website since 2007. Contact him on ed.miller@eufc.co.uk
PrevPrevious‘Seventeen cup finals’ says Jamie
NextFleet bag BonnerNext