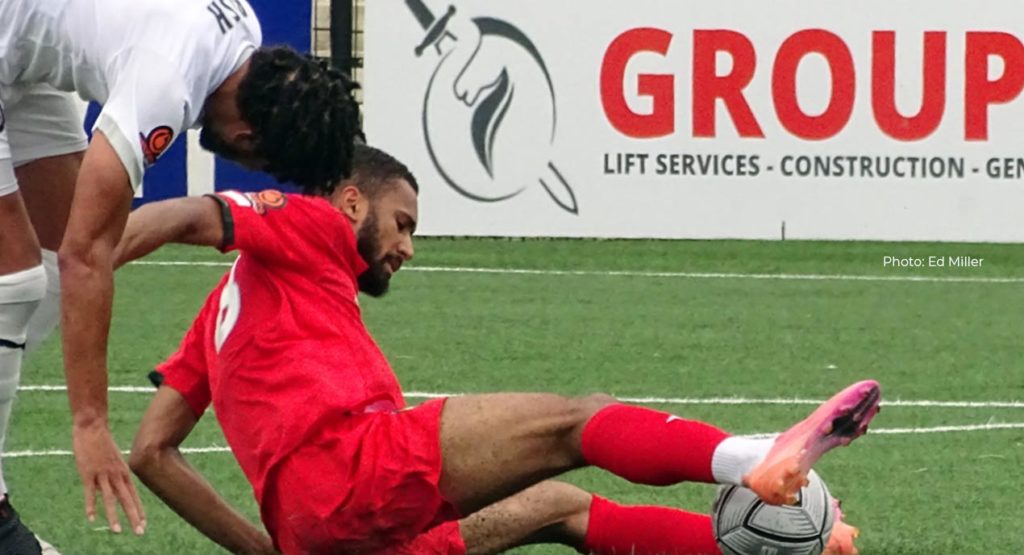 The Fleet certainly weren’t spending their postponed weekend inactive as Dennis Kutrieb put his players through 90 minutes in a behind-closed-doors friendly at Bromley, getting a good look at the bulk of his squad as he fielded two largely different sides in each half.

The starting XI included some of those who hadn’t appeared against Tonbridge including Kreshniq Krasniqi, Christian N’Guessan and Lee Martin.

Michael Cheek led the line for the home side, with other former Fleet faces Chris Bush, Corey Whitely and Luke Coulson in white.

Fleet thought they’d gone ahead in the fifth minute as Jack Paxman surged through the middle to supply former Bromley man Adam Mekki and his shot from inside the box was turned round the post by Mark Cousins. From the corner, Krasniqi headed in but the goal was chalked off for a foul off the ball.

Bromley showed swift counterattacking moves with the ball over the top or in behind to Cheek always dangerous. The ex-Fleet striker got a taste for the target as early as the seventh minute, latching on to Coulson’s cross from the right but that effort was blocked.

Two minutes later, Cheek should have opened the scoring when he was clean through but Josh Gould stood his ground and the Bromley striker planted his ball wide of the post.

However, it was Cheek who fine-tuned his shooting boots to open the scoring after a quarter of an hour. This time a ball was floated across from the left to the right side of the box and there was Cheek to steal in behind the Fleet line to bury a shot between Gould and his near post.

Tanner went for goal himself three minutes later with a free-kick that looped over Cousins but came back off the upright.

Gould kept Fleet in it on 37 minutes when he turned a low shot around the post for a corner and the visitors had the last opportunity of the first half a minute before the end, Rakish Bingham bringing Paxman’s pass under control, doing well to create room for a shot and then seeing a good, firm effort saved by Cousins.

Kutrieb rang the changes with eight new players after the break and Fleet did well to counter the dangerous running and balls into Cheek that Bromley had enjoyed in the first half.

A quiet opening gave way to more Fleet attacking play as the half wore on. Alfie Egan cleared the bar with a shot on the hour mark, closely followed by Joe Martin who did the same with a free-kick.

Fleet were drawing plenty of fouls from the home side and put the home defence under some sustained pressure in the last 25 minutes. Michael West’s delicate back heel into Tobi Adebayo-Rowling needed hasty defensive action from Bromley and then Elliott Romain headed just over from a pinpoint cross from the left.

Greg Cundle forced Cousins into a low save at a stretch and Lee Martin was inches over from the edge of the box as he picked up the rebounded ball and picked his spot.

Fleet could count themselves most unfortunate not to equalise against a stronger Bromley side than featured in this head-to-head in pre-season but the manager will have been more pleased to keep the momentum and progress flowing through his team despite the postponement of the league game at Chippenham.

Ed Miller has been Ebbsfleet United's communications manager and programme editor since 2014 and responsible for the club website since 2007. Contact him on ed.miller@eufc.co.uk
PrevPreviousPete and Maggie back on board as they accept honorary Fleet roles
NextHemel game designated ‘memorial match’Next