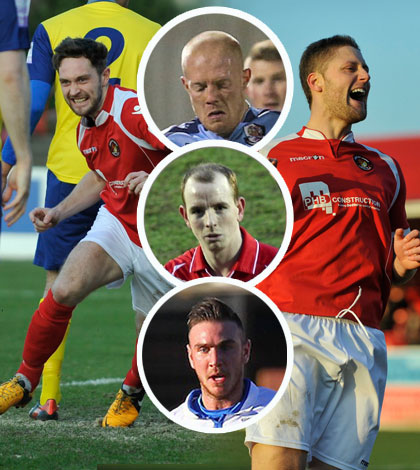 Ebbsfleet United have made three new signings to add to the earlier acquisition of Matt Godden as Kenny Clark, Tom Fraser and Matt Johnson join the ranks, while existing players Dean Rance and Ben May have signed new contracts.

Ex-Dartford and Chelmsford player Clark, 25 (below), is a highly rated central defender who began his career at Dagenham & Redbridge as a youth player and joined Thurrock after his release from the League Two club. He became club captain at a young age at Ship Lane in a four-year spell that included scoring an equaliser for the Essex side at Stonebridge Road in January 2011.

Chelmsford fought off competition for his signature in the summer of 2011 and he quickly became a fans’ favourite, establishing himself as captain and playing alongside Anthony Cook and Aiden Palmer in a side that reached the play-offs. After two seasons with Chelmsford, where he featured in more than 80 games, he was snapped up by Dartford. Clark spent last season at Princes Park, making 31 Conference Premier appearances. He was offered a new deal this summer but failed to agree terms and Steve Brown stepped in quickly to bring the defender to the Fleet.

Brown has also snapped up experienced former Port Vale skipper Tom Fraser from Whitehawk. The 26-year-old midfielder began his career with Brighton, making his League One debut in 2006-07 and playing more than 100 games for the Albion. He moved to Port Vale in 2009 where he was appointed club captain. After 18 months with Vale, he moved to Barnet and then onto Whitehawk, helping the ambitious south-coast club win back-to-back promotions into Conference South. A short spell in Melbourne, Australia, followed in 2013 before Fraser returned to Whitehawk, playing 38 games in Skrill South last season. A vocal and versatile central midfielder, who has also played out wide and in defence during his career, he is noted for his leadership qualities.

Another midfielder arriving at Stonebridge Road is Matt Johnson (below) from Bishop’s Stortford, a combative box-to-box playmaker. The 24-year-old has Conference Premier experience with Rushden & Diamonds and Braintree Town, but started his career as a 15-year-old with Harlow Town. Spells at Aveley – where he won promotion and a clean sweep of player-of-the-year awards – and Erith followed before he made 46 appearances in the Conference for Rushden alongside Michael Corcoran and Shane Huke. Dover fought off competition from Mansfield to land the six-foot midfielder in 2011 but it was only a short spell before a move back to the Premier with Braintree.

In January 2012 he signed for Bishop’s Stortford, soon becoming a mainstay in the Essex club’s midfield and going on to play more than 100 games for them. He had a superb season for the Blues in 2013-14, with his near ever-present record helping him win the manager’s and players’ player of the year awards.

There is sure to be plenty of competition in midfield with news that Fleet’s players’ player of the year Rance has extended his stay with the club. The 23-year-old settled in quickly following his move from Dover last summer and was one of Fleet’s most consistent performers throughout the season, only to miss the promotion final through suspension. He is joined in re-signing by Ben May, whose nine goals in 39 largely injury-hit appearances followed on from the 21 strikes he scored at Dover the season before – and with the close season to fully recuperate, he will be looking to regain that sort of form in 2014-15.

Our players have signed up to the Fleet cause. Don’t miss your chance to do the same – Fleet season tickets discounted until June 9

Ed Miller has been Ebbsfleet United's communications manager and programme editor since 2014 and responsible for the club website since 2007. Contact him on ed.miller@eufc.co.uk
PrevPreviousFleet greet Godden return
NextMacca makes it eighteenNext