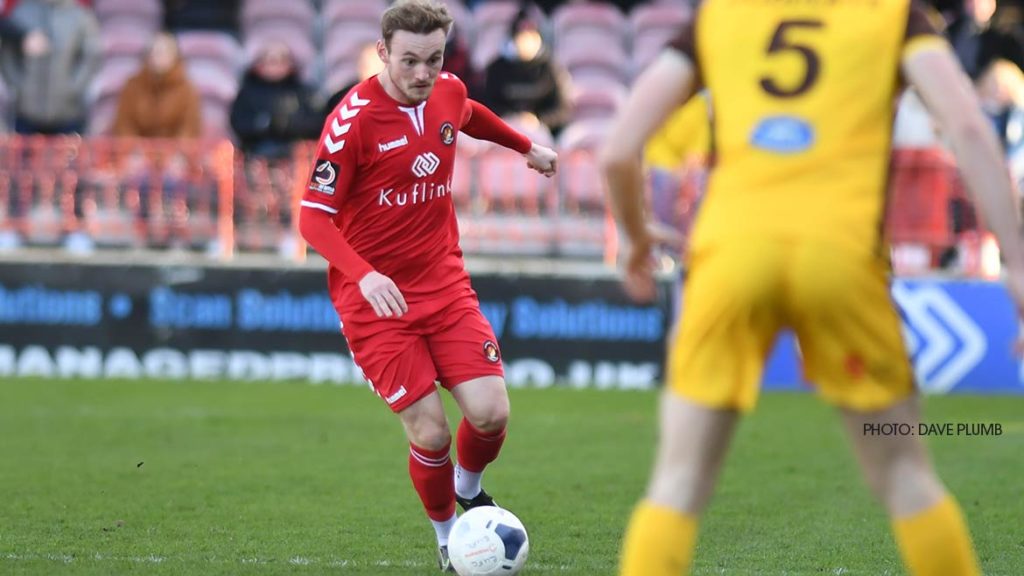 Frankie Sutherland’s frustrations were audibly evident in his post-match interview as he insisted Fleet’s experienced players are desperate to ignite the spark to lift the team out of the bottom four.

“I try and get things going if I can,” Sutherland told BBC Radio Kent’s Matt Cole. “It’s doing the basics and the horrible stuff and there are a lot of players in there who are naturally gifted so it doesn’t come naturally to them.

“The older lads, the experienced lads, everyone’s trying to drive it. If that’s winning a header or a tackle or running 60 yards, whatever it is to try and create a spark because we’re running out of games, let’s be honest, and we need to pick up points as quick as we can.”

And Sutherland was a little exasperated as the three points slipped from Fleet’s grasp in the second-half against Sutton.

“It was probably a game of two halves,” he said. “The first half we were quite good, we were on the front foot and we could have maybe nicked another one and gone in 2-0. We’ve been in that situation before where we are 1-0 up at home and then come out second half. We’ve spoken about it a few times now and I don’t know, just that first 10 minutes in the second half is sluggish, it starts slow.

“We allow them to get momentum back into the game. Then we’re trying to chase and I feel that gives us a kick up the backside. We try to finish strong, it’s tough, they’re not a bad side. Coming off now it’s quite disappointing, especially with the run of home games that we’re trying to maximise and get as many points as possible, especially before the Chesterfield away game. So it’s mixed emotions.”

Sutherland echoed the views of his manager about the difficulty of playing tidy football on the home pitch, although he didn’t want to make it an excuse for results.

“You’ve seen with this pitch, it’s so tough to get any fluidity and momentum in your play by making four or five passes, it breaks down so easily just because the pitch is so bobbly.

“I look at our wingers and the front lads: Jermaine McGlashan down the right-hand side, one v one, he likes to get at people, get crosses in the box. It’s so tough for him after he takes his first touch to dribble with any sort of control.

“It may not be pretty on the eye but at the moment we need points and we’ll take points any way we can. Tuesday night against Woking was literally just a battle, trying to concentrate and keep going, second balls, all the horrible stuff. We managed it Tuesday and first half [today] we looked quite comfortable in doing that.

“The pitch doesn’t look like it’s going to get any better. It hasn’t changed in the last two months, it’s poor and it’s not helping us but we can’t change that. You don’t make any excuses, we have to adapt how we play and maybe that’s cost us a couple of times, we get a bit flat then try and make two passes.

“But it’s not the pitch, we have to man up, grow up, there’s experience there and I think over the last two games even though we’re disappointed not to come away with a win here, I think you’ve seen a more mature performance which has got us four points and another one away at Torquay. I do feel there is something that’s changed, a mentality shift, which is positive. But talk is cheap, we need the points on the board and we go from there.”

Going from there is certainly uppermost in Sutherland’s mind and he targets the next three or four games as huge for the Fleet.

“We’ve got the Trophy next week, another home game against Chorley and we’ll be looking to pick up all three points and that takes us into Chesterfield so we have a big three weeks coming up,” he said.

“So it’s back to the training ground, keep working hard and we’ll see where it takes us. This period is so vital for us because before Tuesday night’s game if you were to look at the league, there was a little bit of daylight and it’s not nice. All the lads are looking at it and then you see we could win two games and we’re still not out of it. It’s tough so that game Tuesday night was massive.

“I don’t know if [today’s] point was a gain or we’ve dropped two but the Chorley game, if we can win that it takes us into Chesterfield and then that game if we do win, we could be in touching distance, we could go past them, but these next three or four league games give us a chance going into the last nine.”

Ed Miller has been Ebbsfleet United's communications manager and programme editor since 2014 and responsible for the club website since 2007. Contact him on ed.miller@eufc.co.uk
PrevPreviousWatson seeks that elusive second goal
NextVideo highlights: Sutton UnitedNext