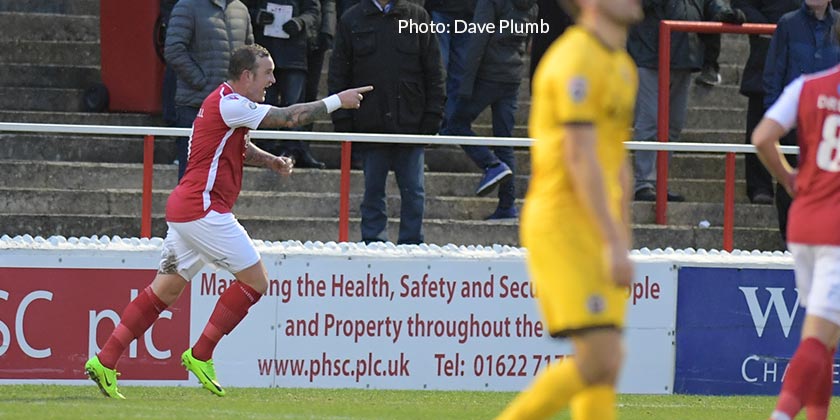 Daryl McMahon believes that Danny Kedwell is revelling in being the focal point for Fleet’s attack this season as his winner at home to Bromley was the fifth consecutive game in which he was on the scoresheet, his seventh goal in nine games and his 11th in the league, taking him to fourth place in the scoring charts.

It’s Kedwell’s best rate of return since joining the Fleet in January 2015 and edges him closer to the half-century of goals for the club.

“He’s getting goals,” McMahon told BBC Radio Kent’s Matt Cole. “He’s in a better position this year in a sense because he’s the focal point of the attack whereas in the last two years he’s been linking play with Darren McQueen or Matty Godden ahead of him. But now we’ve put him up in the highest position and he’s getting goals.”

And playing in front of the likes of Luke Coulson, Myles Weston, Jack Powell and Sean Shields is proving effective for the Fleet’s top scorer, too.

“They’re all clever, the players who play in behind Keds” McMahon enthused. “They all bring something different to the table.”

Indeed it was Coulson who set Kedwell up for the winner with an audacious piece of skill which added to a precision strike from Jack Powell. “If Powelly’s got time around the box, you feel he is going to score,” McMahon said. “Jack is one of them players, you expect him to score. It was a very good goal and the second was a great bit of skill from Luke Coulson with Keds following in.”

The Fleet boss was delighted with three points and thought his side played largely to their strengths after growing into the game.

“I thought we didn’t defend as well as I’d like us to in the first half, not just the back four but the whole team,” McMahon believed. “We were too open at times that we didn’t need to be. I felt we could always play our way through them which I thought we did. We were making it too easy for them to have chances when they shouldn’t have. So we just tightened up a little bit and probably could have scored a couple on the counterattack. Coulson’s strike off the crossbar is fantastic technique.

“We were very good first half and we played some really good stuff. We had to be a little bit dogged in the second. They put a centre half up front in the last 10 minutes and were direct and we had to defend. It was end to end with lots of chances and a little bit feisty at the end which is nice in derby games for everyone!”

And McMahon also praised the input of Marvin McCoy who played 45 minutes for the first time since October. “Marv’s been training brilliantly,” he said. “And he’s been unfortunate not to play. Since he’s had his injection in his achilles he’s been back to himself and he deserves some game time. I thought he was terrific, I thought he defended really well against Louis Dennis who’s a decent player and [Luke] Wanadio.”

Ed Miller has been Ebbsfleet United's communications manager and programme editor since 2014 and responsible for the club website since 2007. Contact him on ed.miller@eufc.co.uk
PrevPreviousFleet 2-1 Bromley
NextFleet sharpen up the knives for Daggers visitNext