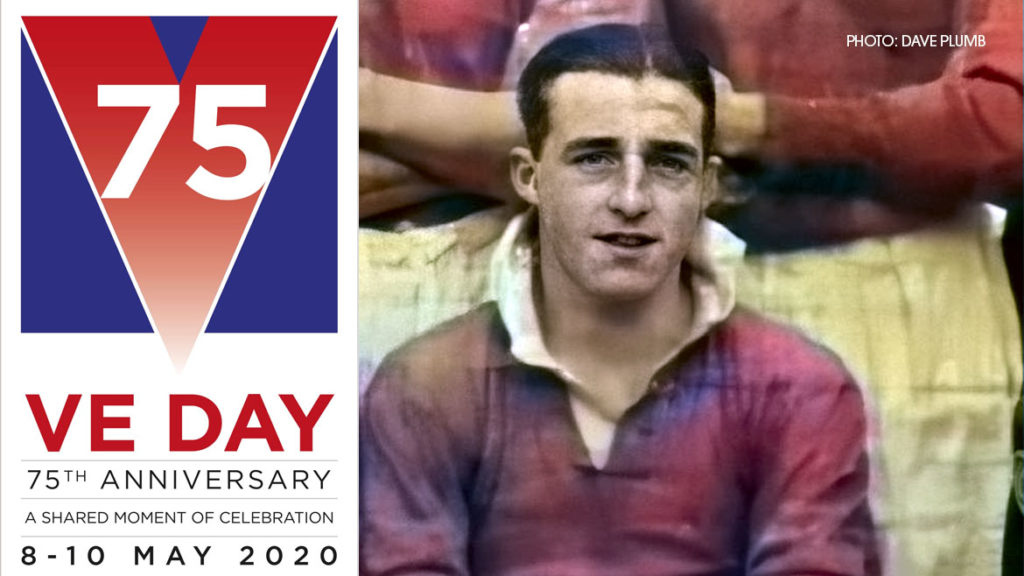 On this the 75th Anniversary of VE Day, we remember just one of many veterans, a man who played at Stonebridge Road in the 1930s and who later won the Distinguished Flying Cross for bombing missions over Germany in the Second World War.

Footballer, cricketer, decorated war veteran and – to top it off – a survivor of five marriages, the life of Bill Edrich was certainly anything but run of the mill.

Indeed the former Northfleet United player’s refusal to do things by halves was directly linked to his wartime experience, during which he served in the RAF.

Playing minor counties cricket for Norfolk and turning out as an amateur footballer for Norwich City at just 16, Tottenham spotted the young man’s talent and, having qualified to play cricket for Middlesex, London was calling for Edrich in both sports.

At 18 years of age, he was one of a host of youngsters brought to Stonebridge Road by Spurs in 1934 with the aim of, as well as learning their trade, also rejuvenating a trophy-less Northfleet United side.

A left winger, he immediately showed promise and after signing amateur forms with Tottenham in October 1934, he began to terrorise Kent League defences for the Fleet, scoring his first goal in an 8-5 friendly defeat against his parent club.

A regular goalscorer throughout the season, his best display was a four-goal haul in a 9-2 win over Sheppey United just after Christmas. Fleet went on to win the Kent League and League Cup double and finished as runners-up in the Kent Senior Shield. And Edrich scored a brace in the Kent League Cup final win over Gillingham at Stonebridge Road to seal a fine debut season.

Called back to White Hart Lane in 1935 (though he continued to make the very odd appearance for the Fleet in 1935/36), he went on to play almost 40 times for Spurs before his higher calling of cricket put paid to his winter pursuits on the football field.

His final appearance for Spurs came in 1937, though he did continue to play non-league football – for Chelmsford – through to 1939.

His cricketing prowess, meanwhile, was on the rise. In 1938 he scored 1,000 runs before the end of May and featured in the first of what would be 39 Test appearances. And the following year he scored 219 against South Africa in Durban.

But war was coming and with regular sport put on hold in 1939, Edrich joined the Royal Air Force. He would attain the rank of Squadron Leader as a pilot for Bomber Command, flying Bristol Blenheim bombers over Occupied Europe.

In his first flying mission, he watched a fellow aircraft “plunge towards the sea, its wing like a blazing torch”. The pilot had been due to play cricket alongside Edrich the following day.

In 1941 he participated in what the Daily Telegraph called “the RAF’s most audacious and dangerous low-level bombing raid” over Cologne, during which 12 of the 54 aircraft sent out were shot down.

In another op in 1941, Edrich flew one of seven bombers targeting German shipping. Three of his fellow aircraft were destroyed in the air and when they were engaged in a dogfight with German fighter aircraft, the remainder soon ran out of ammunition.

Edrich later remembered, “I could see the Messerschmitt pilot turn towards us and prepare to target us. He was within 25 metres and attempting to fire. There was nothing we could do but wait for it. He closed to point blank range – about 30 yards – and then nothing happened. His guns jammed. I caught the pilot’s eye and saw a look of exasperation… [but] with a shrug of his shoulder he turned away. It felt like two or three lifetimes in one and it would certainly have been the end of mine but for that stroke of good fortune.”

He always put the England cricket shirt he had worn in his first Test on beneath his flying suit until, after one near escape in 1942 that saw Edrich’s Blenheim crashland with engine shot and “lurching like an injured bird”, it was too tattered to wear anymore.

During a period of leave, Edrich missed the massive thousand-bomber raid on Bremen. He returned to the officer’s mess on reporting for duty once more to find it “silenced and empty. Nearly all the officers had been lost over Bremen.”

In 1943, after flying 30 operations (the chances of completing that statistic were one in three) and his nerves stretched to the limit, Edrich was sent on a 16-week training course, having been pronounced unfit for further flying duties. His subsequent role included round-the-clock planning in helping preparations for D-Day.

Edrich’s wartime existence was a strange one that involved near-suicidal flying missions one day, followed by “relaxation” in the form of cricket and football matches the next. “Mind-numbing terror could be swiftly followed by a kickabout, a pint at the local or hours of boredom,” he wrote.

He was awarded the Distinguished Flying Cross (right) but his numerous feats of death-defying flying had had a profound effect on the sportsman. Edrich would drink heavily in between missions, a habit that continued long after his wartime service. Cricket teammate Denis Compton remembered that, “He would obviously need a few beers to restore himself between operations and this becomes a customary habit if you do it for a long time in such circumstances.”

His brother Geoff had survived three years of Japanese captivity, including a spell put to work on the notorious Burma Railway, and the pair were reunited in 1945.

None of his cricket or football achievements, Edrich wrote later, could “ever approach the drama, endeavours and comradeship of the wartime campaign.”

Feeling an “immense relief at having survived”, Edrich adopted a party lifestyle and had a different attitude to sport after the war. He pursued cricketing success, was “almost indifferent to his own safety” as a batsman and was far more confident in his game, scoring 462 runs in the 1946/47 Ashes tour of Australia.

His career went from strength to strength, with six double-hundred partnerships with Compton (another who had combined a football and cricket career) in 1947 for a total of 3,539 individual runs that summer.

And his colourful life away from the field continued as he married and divorced with alarming regularity. He was often late or a no-show for practices, including on the 1947 Ashes tour, after all-night drinking binges. Yet, considering his wartime experiences and his subsequent embrace of life in the fast lane, Edrich was described as “endlessly cheerful and always optimisitc”.

He retired from cricket in 1957 (though he continued at minor county level until 1971) and a stand at Lord’s was named in his and Denis Compton’s honour.

The former Northfleet United teenager, whose life took an amazing turn after his departure from Stonebridge Road, died aged 70 in 1986 as a result of a fall.

Ed Miller has been Ebbsfleet United's communications manager and programme editor since 2014 and responsible for the club website since 2007. Contact him on ed.miller@eufc.co.uk
PrevPreviousGlorious May 7th!
NextWin a signed shirt for best Jordan lookalikeNext