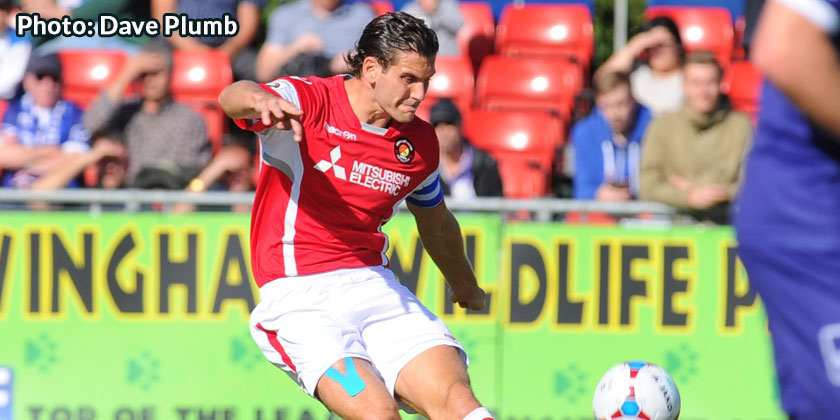 Fleet’s league campaign gets back on the road

Fleet have rested and recuperated after what has been their longest stretch without a match since reporting back for pre-season training. While one missed Saturday hardly seems like a long lay-off, the busy schedule and cup games in the lead-up to the Maidstone derby means that the last two weeks has lingered for fans eager to get the league campaign back under way.

One league defeat, off the back of the FA Cup reverse, will have encouraged opposition teams who had already grown weary of seeing Fleet stretch their lead at the top of the table, but Daryl McMahon is relaxed heading to Gosport as he insists it’s business as usual for a fully fit squad who have hardly put a foot wrong, even in the games they have lost.

Having used nigh-on the same starting line-up for the majority of matches, the two-week break has seen the constant game-to-game grind of August and September relent somewhat and the Fleet boss has used the time in training to regroup and focus his squad’s efforts in areas they had previously lacked the time for.

One thing that won’t have relented, however, is the toughness of the fixture list which throws up an in-form Gosport Borough who have built on the success of previous seasons and are again in the mix at the top of the table. A 2-2 draw last season at Privett Park was a disappointment for the Fleet who led that game 2-0 and this clash will be no different.

Borough can boast the league’s top scorer in Justin Bennett (once again) and, while they lost playmaker Matt Paterson to Havant in the close season, it appears to have done them little harm. That said, Gosport last week lodged an unsuccessful £7,500 bid with Havant to lure Paterson back, with the Hawks replying with a tit-for-tat £12,500 bid of their own for Bennett that has sparked a war of words between the clubs. Manager Alex Pike could add Rowan Vine to his line-up before tomorrow’s game as the former Luton, QPR and Welling striker is now a free agent after leaving Havant.

Like Maidstone, who they sit just behind in sixth place, Gosport are a side with a decent defensive record. Either side of a 7-0 thrashing of Bideford in the FA Cup, they have lost two games at home, however. The first to Margate in the league and the second, last week, in an FA Cup replay against Whitehawk, a side Gosport have also drawn with twice this season.

Manager Pike, who recruited former Fleet boss Liam Daish in recent weeks to help take training sessions (Daish is a good friend of Gosport assistant boss Mick Catlin), has a solid spine to his side that has helped haul Gosport above the ordinary sides in the league. Goalkeeper Nathan Ashmore, defender Brett Poate and midfielders Mike Carter and Dan Wooden added to Bennett’s firepower have made Borough again a good bet for the play-offs.

Three of those players (Poate, Wooden and Bennett) are facing suspensions next week so Fleet will hope they don’t rue the timing of this fixture as all three will be out to sign off in style against the league leaders.

Ed Miller has been Ebbsfleet United's communications manager and programme editor since 2014 and responsible for the club website since 2007. Contact him on ed.miller@eufc.co.uk
PrevPreviousClub stalwart reaches 80 not out
NextGosport Borough 1-2 FleetNext