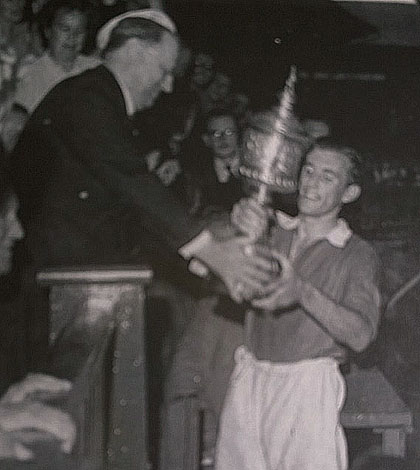 The 125th Kent Senior Cup Final will see the club’s 13th appearance in it – and hopefully it won’t be an unlucky one. We have a 7-5 winning rate and must hope we extend it on what will be an historic occasion with the KCFA rightly proud of remembering 125 years of the competition.

Paul Harrison delves into the past to give us a flavour of Fleet finals past.

The high-water mark of the competition with the post war boom in attendances packing them in as the old rivals locked horns, drawing 2-2 at Maidstone with George Baldwin netting both for Fleet in front of 8,250. The replay was played at the largest ground available – at Priestfield – where Bert Hawkins earned Fleet a 1-1 draw in front of 16,677 before another game at the same venue saw Fleet finally triumph 2-0 with Tommy Kingsnorth deflecting a Charlie Wipfler shot into his own net early in the second half. The game was settled on 82 minutes when a measured Jim Deevey pass allowed Bert Hawkins to run through and score in front of a 12,663 crowd who then watched Gilbert Aldous lift the club’s first ever trophy (pictured above) in just the third year of its existence.
TEAM: Gould; G.Aldous; Chambers; Busby; S.Aldous; Dimmock; Wakeman; Deevey; Hawkins; Baldwin; Wipfler

The old rivals clashed at Priestfield in front of 8,874 with Fleet just coming out on top. There were only 9 minutes on the clock when Jack Winter headed home a Truxy Wakeman cross and when Bill McEwan increased the lead on 80 minutes victory appeared secure but an 86th minute Jack Urquhart goal meant a tense finish before Fleet achieved bragging rights and Sam Chambers lifted the trophy.
TEAM: Gould; Flockhart; Deevey; Jones; Chambers; Carroll; Wakeman; Baker; McEwan; Winter; Loukes

It had been 24 long seasons since Fleet had last appeared in the final and in all that time had only once even managed a semi-final place and it hardly seemed worth the wait as the favourites floundered and allowed the Ravens to take the spoils courtesy of a Junior Crooks goal on 39 minutes. Lee Smelt kept Fleet in the game, saving Alan Hawkins’ penalty but the Ravens well deserved their victory against a below-par Fleet in a game watched by 1,223 at Maidstone.
TEAM: Smelt; Kinnear ; Hall; Embery; Pearce; Burrett; Brown; Finch; Woon; Jacks; Walker (Idle 74)

Just as four seasons earlier, Fleet started strong favourites but this time made no mistake as an early goal from Charlie Pooley on four minutes eased the tension. Ashford rarely threatened and Gary Aldous ensured victory with a glancing header from a George Jacks cross in front of 1,209 at Maidstone and enable Geoff Idle to lift the trophy for Fleet for a third time.
TEAM: Lewington; Idle; Jacks; Burrett; Bryant; Hart; Pooley; Stonebridge; Aldous; Dyer; Dudman;

Priestfield was the venue for an all-Southern League Premier clash, but with the whole division separating the clubs, Dover were overwhelming favourites – that was until Joe Jackson was sent off on 30 minutes. Despite numerical advantage, Fleet were unable to take command and Leroy Ambrose burst through to score the decisive goal on 39 minutes. The closest Fleet came to equalising was a Roy Parkyn shot that Steve Chivers did well to tip on to the post. Attendance 1,704.
TEAM: Kemplen; Carter; Hennessy; Day; Parkyn; Ironton (Palmer 75); Fordred; Wells; Groom (Cotter 69),Watkins; Blewden

For the first time ever a KSC final was played at Stonebridge Road in front of a 1,618 crowd but with Margate keeping a vice-like grip on the Fleet front men, it was hardly a spectacle. Fleet were further handicapped by playmaker Andy Adebowale limping off after only 11 minutes and when former Fleet man Tony Dixon scored right on half time, there was no way back for Fleet.
TEAM: Smith ; Newson; Campbell; Mortley; Dimmock; Broderick; Adebowale (Billenness 11, Docker 71); Wilkins; Powell; Portway; Jackson

Fleet were back in the final and having won the toss for ground advantage made no mistake this time. Steve Restarick proved man of the match with early strikes on 21 and 27 minutes, and appeared to have completed his hat-trick on 41 only to have it ruled out on a marginal offside. The visitors came more into the game after Fleet skipper Scott Lindsay was sent off for a second yellow on 61 minutes but the match was decided on 83 minutes when Che Stadhart netted a third Fleet goal.
TEAM: Smith; Gowler; Campbell; Wilkins; Lee; Lindsay; Spiller; Jackson; Hegley; Powell; Restarick (Stadhart 79);

Dover won the toss for ground advantage but Fleet dominated from the start to record a fine victory in front of 1,002. Che Stadhart scored a fine individual goal after only three minutes and Craig Wilkins turned in Darren Smith’s corner after 20 minutes to make it 2-0. On 57 minutes Stuart Munday turned a shot into his own net and then upended Che Stadhart on 80 minutes to enable Jimmy Jackson to shoot home from the penalty spot.
TEAM: Turner; Smith; Duku; Barnett; Lee; Rose; Owen; Jackson; Stadhart (Hegley 87); Wilkins; Restarick

Fleet again lost the toss for home venue but it hardly mattered as they produced an even better performance than the previous season to produce a stunning Hartsdown Park victory in front of a crowd of 2,018 as Fleet celebrated a hatrick of victories.Jimmy Jackson opened the scoring on 34 minutes and Aaron Barnett volleyed a second three minutes later against a dispirited home side. Margate had a chance of getting into the game after Liam Hatch handled but Terry McFlynn’s penalty hit the crossbar and Fleet made them pay with three late goals through Francis Duku (83), Paul Booth (85) and Danny Lye (90).
TEAM: Turner; Burton (Coyle 55); Lee (Skinner 29); Lye; Barnett; Duku; Smith (Booth55); Owen; Hatch; Stadhart; Jackson

For the third final running Fleet lost the toss and took the short trip to Hayes Lane, Bromley, for an exciting final. Liam Daish was ordered from the dugout after upsetting the match officials with some verbal home truths and Fleet fell behind to a 31st minute Donal Sullivan goal, but right on half time Bradley Johnson – in his pre-Leeds and Norwich days – levelled for Fleet. It was nip and tuck through the second half until Danny Slatter appeared to have won the game for Fleet on 82 minutes with a spectacular 30 yarder. But the Ravens refused to give up and Nic McDonnell headed an 87th minute leveller. This meant 30 minutes of energy sapping extra-time and within two minutes Simon Mitchell netted what proved to be the winning goal of an eventful game watched by 1,041.
TEAM: Holloway (Kerr 37); Hawkins; R.Smith; McCarthy; Glozier (Skinner 89); Triantis (Roberts 62); Johnson; McKimm; Slatter; Moore; Jackson

Once again the venue toss was lost and Hayes Lane, Bromley was the venue. For Cray back in the final for the first time in 107 years it was hardly worth the wait as the FA Trophy holders dominated. Grant Hall was peppered with shots in the Cray goal while at the other end Tony Dolby hit the bar. Luke Moore opened the scoring on 39 minutes, Cray battled well but the floodgates finally opened when Stacy Long (72) added a second followed by a Moore penalty on 79 and two minutes later a fourth from George Purcell to complete a unique cup double for Fleet – watched by a mere 648 in what was a pre-season game held over from the previous season.
TEAM: Cronin; Hawkins; Opinel (Ricketts 82); Stone; J.Smith; Charles; Shakes; Long; Gash (Ibe 69); Moore; Barrett (Purcell 79)