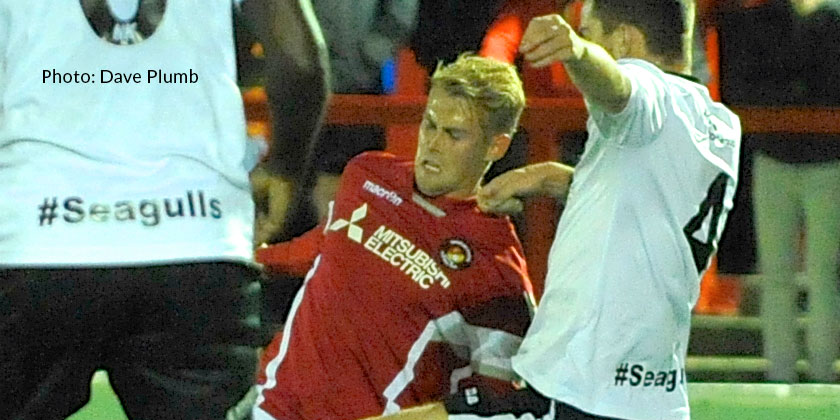 Hot on the heels of a 6-0 home win, Fleet visit the last place where they won 6-0 away – Weston-super-Mare. That win, in 2013/14, remains Fleet’s only victory at the Woodspring Stadium but the unbeaten travellers will be going all out for another in Good Friday’s clash.

Fleet boss Daryl McMahon was obviously delighted with his side’s showing against Hemel Hempstead last weekend, where his tactical switch to bring in Charlie Sheringham, while also playing Jordan Parkes and John Paul Kissock ahead of Dean Rance, paid off handsomely.

“It wasn’t necessarily a dramatic change,” McMahon told FleetOnline. “We’ve always had a shape at home to attack. We’ve mainly played with two strikers, sometimes three out and out front players. It’s about getting the balance right and it’s about the pitches as well. We’ve been through a period where we’ve played on some terrible pitches in bad conditions and in those situations, some of our more technical ball players, you won’t get the most out of them on the type of pitches we’ve played on. Now the weather has turned and the pitches are back to a better condition, maybe a bit bobbly still, but dry, flatter and not so boggy, we can get our ball players on the ball. That was my thinking on Saturday.”

Sheringham has been feeding off scraps from the bench most of the season but McMahon says his day-to-day hard work is not something supporters get to see. “Charlie’s had to bide his time. He could have left the club in January and lots of other clubs wanted him but he’s a player I believe in. But you can’t ignore the fact that all of our strikers have contributed greatly this season so it’s not like we’re suddenly making a big change, we’re just using our options at this stage of the season.”

Anthony Cook returns from his three-match suspension, while Tom Bonner sits out the final 90 minutes of his four-game ban and Fleet are otherwise at full strength.

Weston-super-Mare have slipped into the bottom two in recent weeks after the revival of Havant & Waterlooville and St Albans City though they have a game in hand on the teams just above the drop zone. The Seagulls, having hauled themselves off the bottom of the table early in 2016, are now staring relegation in the face and will be desperate for the points. It’s been a tough spell for Weston, having had to play Sutton, two games against Maidstone United and now ourselves in succession.

Ryan Northmore’s side did very well to win a point at Sutton and came within a minute of doing the same at home to Maidstone before being outplayed at the Gallagher Stadium in the return fixture last weekend. The Somerset side have looked a different prospect at home than on their travels recently, with a 2-1 over Dartford and a 5-2 thrashing of Oxford City in the last six weeks, as well as their close-run defeat to Maidstone, but they remain with only one win in eight games.

They have welcomed Bath defender Sekani Simpson to the squad lately (he was an unused substitute in our recent draw there) and added Greek striker Ioannis Varouxakis. Midfielder Kane Ingram, who has had two previous spells at the club, has also returned after leaving earlier this season to concentrate on his business but the remainder of the squad is much the same as that which travelled (twice!) to Stonebridge Road in the autumn.

Ed Miller has been Ebbsfleet United's communications manager and programme editor since 2014 and responsible for the club website since 2007. Contact him on ed.miller@eufc.co.uk
PrevPreviousJohann Cruyff: how a former Fleet man kick-started his career
NextWeston-super-Mare 2-1 FleetNext