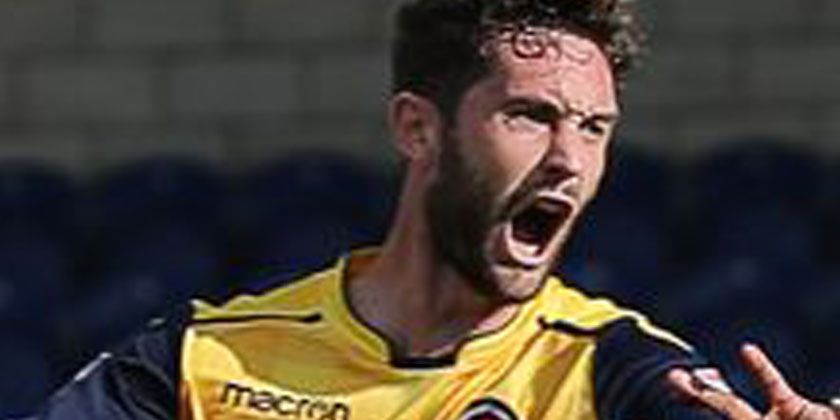 Fleet through on penalties in epic drama

Ebbsfleet United are one game from Wembley after an incredible comeback to win on penalties at Aldershot Town.

And it wasn’t one comeback, it was two, with Fleet equalising in the last minute of extra-time and then coming back from 3-1 down in the shootout to win 5-4. Dave Winfield scored the late goal to take the game to penalties and Dean Rance netted the crucial kick on a night of immense drama.

Two goalless scorelines between these sides here at the EBB Stadium this year (before extra time) hardly tells the story of two pulsating clashes, this one surely the most dramatic victory in Fleet’s history.

Despite some hopes that Sean Shields might make the cut, he remained sidelined and thus the only change for McMahon was Saturday’s goalscorer Jack Connors replacing Chris Bush at left-back. Aldershot went with an attacking lineup, top scorer Scott Rendell supported by Nicke Kabamba and Matt McClure either side of him.

Aldershot were quick to impress their home fans behind the goal they were attacking and Nicke Kabamba received a pass out wide in the opening minute, dragging his shot wide. Fleet were enjoying parity in the opening minutes and Corey Whitely saw a shot saved after good approach play but Aldershot increasingly stamped their mark on proceedings.

Kabamba got clear again on seven minutes and Nathan Ashmore had to pull off a fine save with his hand as a shot flew in from the left, Connors mopping up as a loose ball spun clear on the edge of the six-yard box.

On 17 minutes, Jack Powell climbed well to knock a header on to Kedwell but his shot was pulled across goal and, on the break, Aldershot roared upfield, winning a corner from a Jake Gallagher cross that Clark was forced to nod behind.

The Shots midfield continued to assert itself and their passing was crisp and to feet, with Fleet pushed back as they struggled to find an outlet. Lewis Kinsella slipped past Whitely on the left and delivered a cross that was twice blocked inside the box before Gallagher ended up putting an effort over Ashmore’s crossbar. Gallagher was on it again moments later, clattering into Luke Coulson and then shooting just wide.

Chances continued to come Aldershot’s way but they weren’t really testing Ashmore for all their pressure. Kabamba was afforded too much room for another effort and Matt McClure headed over on 23 minutes as the Shots turned the screw. There wasn’t much play in the Aldershot half to take the heat off, Jack Connors lifting a cross over the bar and Powell turning Lawrie Wilson’s cross into the hands of the goalkeeper on 45 minutes.

Before that, Fleet took some of the sting out of the home side in the lead-up to the break, though Winfield had to get in the way of an effort from Scott Rendell who was enjoying a battle royale with Clark. Referee Young wasn’t winning too many fans among the home contingent and he left the field at half-time to a chorus of boos as Fleet looked relieved for a chance to collect themselves.

Collect themselves they did and the visitors were much more solid in the second half. Aldershot loosed off a few potshots but it was Fleet who could have made the big breakthrough 10 minutes into the second half.  It came from a rare break into the Shots box, Kedwell powering into a gap provided by Jack Powell’s pass only to be brought down by Callum Reynolds. The Aldershot centre half escaped a card by a somewhat lenient Mr Young and was able to breathe a further sigh of relief when Kedwell didn’t connect well with his low spot kick and Lewis Ward was able to save with his legs.

That woke the home crowd up again and Fleet had to be careful the home side’s renewed enthusiasm didn’t roll them over. Substitute Jim Kellerman was only on the pitch for a minute before he burst through midfield and delivered for McClure who sprinted into the box and drew another excellent one-handed save from Ashmore.

Aldershot could have taken the lead again on 69 minutes when Kabamba was halted on the edge of the box but Kellerman crossed and Rendell’s header went just over as Fleet desperately tried to clear their lines, Kenny Clark making a superb challenge. Kellerman’s involvement was short-lived as he appeared to dislocate a shoulder when reaching for Rance as the Fleet midfielder got away from him on the halfway line. After a five-minute delay, the substitute was stretchered from the field.

Fabien Robert had Ashmore back-pedalling with an audacious turn and lob that just cleared the Fleet bar but after that the visitors enjoyed their best spell of the game, forcing a couple of corners as time ticked away. Winfield wasn’t far off with a header from Powell’s corner that didn’t quite have the power to reach the target. In nine minutes of time added on, Fleet enjoyed plenty of possession around the home box but couldn’t get a shot away and the final whistle blew for extra-time.

The first period was typically cagey but the second got off to a blistering start when Aldershot broke the deadlock a minute after the restart. Rendell’s deep cross was dealt with but from the next ball into the box by Kinsella, Cheye Alexander found Kabamba who climbed highest and directed a header into the top corner, away from Ashmore’s reach.

Aldershot kept the Fleet at bay for most of the remaining 14 minutes but buckled just as the game looked to be in their grasp. It came as Fleet pressed from wide and a last desperate high cross was flung to the far post by Rance where Winfield was on hand to get his head to the ball and direct it over the line.

That heralded a penalty shootout and after Reynolds and Rowe scored either side of Myles Weston’s strike, Fleet seemed to be out of it, missing their next two spot kicks as Ward saved from both Marvin McCoy and Powell. Aldershot only had to score one more penalty to win it but amazingly Kinsella hit the post and Robert’s spot kick was well pushed away by Ashmore. In between Norman Wabo, with the fearless enthusiasm of youth tucked away his effort with aplomb. Kedwell, reversing his experience in the promotion final against Maidstone, then struck home his penalty after missing one in normal time.

Into sudden death, Manny Oyekele and a confident Connors then exchanged successful kicks to make it 4-4. Shots man of the match and goalkeeper Ward then hit his penalty off the foot of the post, leaving Dean Rance with the immense responsibility of wrapping things up. He did just that, despatching his kick for the most unlikely of shootout wins before wheeling away into the corner of jubilant Fleet fans where 10 years previously they had celebrated a late Michael Bostwick clincher.

“Dramatic” didn’t even begin to describe it and Fleet will have minimal time to recover before they take on Tranmere Rovers at Prenton Park for what is surely the most important game in the club’s history.

Ed Miller has been Ebbsfleet United's communications manager and programme editor since 2014 and responsible for the club website since 2007. Contact him on ed.miller@eufc.co.uk
PrevPreviousClub shop clearance sale
NextRance on his spot-kick clincher: “I wasn’t letting anyone else have one”Next