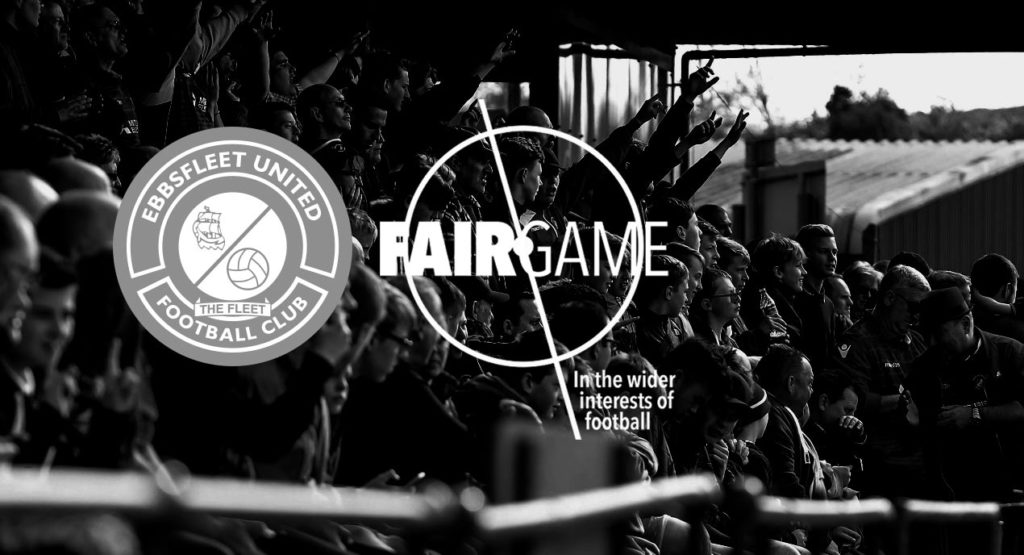 Ebbsfleet United joined 23 other teams at a prestigious launch in London today calling for a new direction for our national game.

The Fleet are one of the founding members of Fair Game, a group of value-driven clubs, supported by 40 world-renowned experts and backed by politicians of all colours.

The government is currently developing policies on how to change the national game as part of Tracey Crouch’s football governance review. Fair Game aim is to help develop the long-term realistic solutions needed.

The details of that vision are outlined in Fair Game’s 48-page manifesto, Putting Pride Back In the Shirt: Fair Game’s Solution for the National Game, which was launched today at Plough Lane, the home of AFC Wimbledon – one of the 23 clubs.

It details solutions to various problems within football, including the owners and directors test, financial sustainability, protecting the heritage of clubs, a fairer distribution of TV revenues, opposing the European Super League, and tackling discrimination.

The document is the result of over six months of hard work from Fair Game, and follows: ongoing consultation with the clubs, recruitment of global experts, brainstorms, four workshops, nine expert-led working groups, a 66-page options documents, five surveys of clubs, and two open scrutiny sessions.

Fleet CEO Damian Irvine said, “Given what we as a club and a wider football community have experienced the last 12 months, a sustainable, well-governed sport is something we all aspire to. With that in mind, Fair Game is absolutely the right vehicle to ensure mature, measured and meaningful debate and lobbying where needed. Their core principles mirror our own as a club and what we aim to reflect on behalf of our investors, partners and supporters.”

Among those backing the call is the Mayor of Greater Manchester, Andy Burnham. He said: “Fair Game’s proposals are exactly what football needs. I’m only too aware of the dangers that exist. We’ve seen the collapse of Bury and the spectre of the ESL. Football is integral to our communities.

“The game needs a reboot. I back the need for an independent regulator, for an Owners and Directors Test that is fit for purpose, and most importantly the protection of the heritage and traditions of our clubs.”

Niall Couper, the Chief Executive Office of Fair Game, added: “Tracey Crouch’s review represents a once-in-a-lifetime opportunity to change football for the better. We have to grasp it and we believe our proposals lay that path.

“We want a sport where every fan can put their shirt on in the morning proud in what it stands for, safe in the knowledge that the traditions and heritage of their club will always be there.”

Ed Miller has been Ebbsfleet United's communications manager and programme editor since 2014 and responsible for the club website since 2007. Contact him on ed.miller@eufc.co.uk
PrevPreviousNew kit stock – register interest for yours now
NextKent FA raise awarenessNext