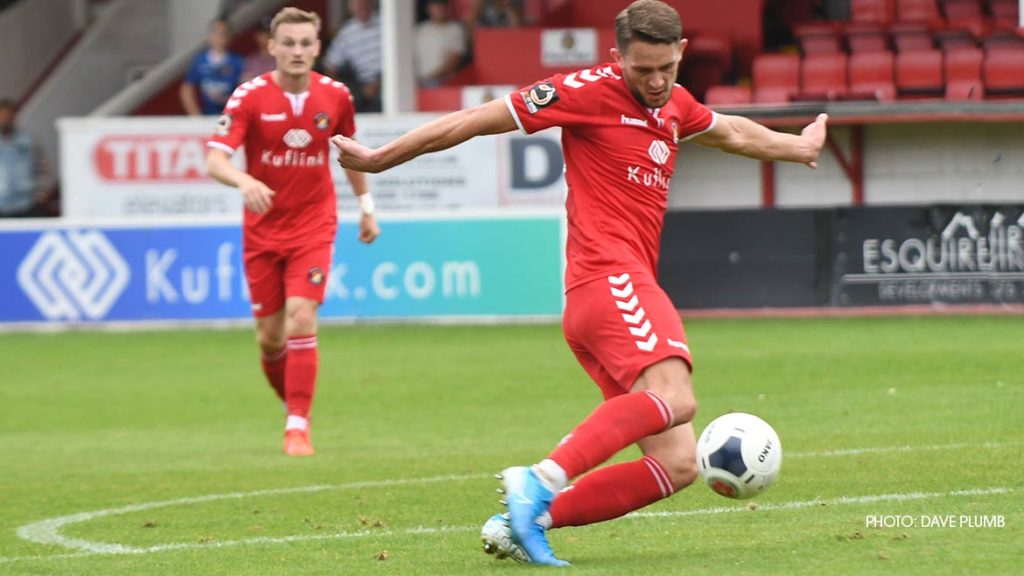 Two home games in four days provides the Fleet with a further opportunity to nail down that elusive first win at the Kuflink Stadium – but fast-improving Barrow and Barnet stand in the way.

Barrow are first up, off the back of a 3-0 win over Solihull Moors and a victory at Aldershot the week before that lifted them out of the bottom four and Garry Hill believes they are a better side than their start to the season suggested.

“They’re a very good footballing side,” he said. “They had a tricky start, were in the bottom four two weeks ago but they’ve settled down and they seem to be going in the right direction after some good wins recently.

“But we’re going in the right direction too if you look at the last six games, I’d like to think we’re catching up from a slow start and now we’ve got to catch up on the teams above us.”

Fleet will need to build on the late-earned point at league leaders Woking last week, a game that presented plenty of challenges.

“With Aswad Thomas not fit, Myles Weston had to come in and play left-back,” Hill explained. “With Woking on top so early and Myles as a consequence getting booked early on too, we also had Dave Tarpey on top of his game from the first whistle. I was a little concerned at how quickly he was making things happen for them.

“By changing that formation, it relieved the responsibility on Westy to concentrate on defending and we could push him up where he’s more exciting, more advanced. We’ve got be in the position in certain games where we can change formation if the situation demands it and have the players to make the most of that. And doing that last Saturday kept us in the game in the first-half and allowed us to push on in the second.”

“We made two changes at that late stage of the game,” said Hill, “because the players had put a lot in. I thought a bit of freshness even for that short period might give us a bit of a spark though to be fair, we got a spark even after half-time by bringing Gozie Ugwu on. He put himself about and made a telling contribution and was a big part of us getting a result.

“It was a good point, it showed a lot of character. Any team who are 2-0 down with six minutes to go, wherever they are in the league, would need a great deal of character to come back, even more so away at the league leaders.”

Fleet took on a Dagenham & Redbridge side on Tuesday in a behind-closed-doors friendly, winning 3-0 with Alfie Egan and Josh Umerah amongst the goalscorers.

“It was of benefit to both sides,” said Hill. “It was mainly a private affair between the two clubs in case we’ve got trialists in there, more of a training game, but it was with a view to getting minutes for some players who have been out with injury or knocks or those who have been on the bench and not getting the minutes they need. It’s hard for them when there aren’t the games in which to play all of them. At the same time you don’t want to overdo it for it those players who have been playing two games a week, so it was a useful exercise for us and for Dagenham too.”

Fleet await not only a win at the Kuflink Stadium, but also a first clean sheet of the season and the manager thinks that’s a monkey his side need to get off their backs as much a home win.

“It’s encouraging that we’ve turned things round a bit in these last few games against teams like Notts County, Dover away, Woking away,” he said. “We’re getting a lot more settled in the squad, we’d like to maybe add one or two more in time in areas where we need it. We obviously need a couple of three-pointers and we’d like a clean sheet as well. That’s a big factor, irrespective of what formation or team we put out on the park. Getting a clean sheet would be massive for us, a boost for everyone connected with the team.”

Ian Evatt’s Barrow stand in the way, looking to avenge successive defeats by the odd goal in their last two visits to the Fleet. They boast a couple of loanees on season-long stays from EFL clubs and a core of seasoned National League players.

Those include John Rooney who scored twice against Solihull last week, Wayne’s brother being a real danger from midfield and with a useful set-piece technique.

Up front, Barrow have been getting the most out of summer signing Scott Quigley from Blackpool while Dior Angus signed permanently from Port Vale and one-time Fleet target Byron Harrison returned to the club for a second spell in the close season.

Barrow were the last opponents of Daryl McMahon’s time in charge, a narrow 1-0 win for the Fleet seeing off the Bluebirds in a game they largely dominated. And manager Evatt said in midweek he believes this side is better than the one he put together last season in his first year in management.

This will be Barrow’s 10th visit to Stonebridge Road, with the two sides yet to record a draw, Fleet winning five and Barrow four of the previous nine clashes.

The match is not segregated and Barrow fans are free to use the Fleet social club. Car-parking is available at Ebbsfleet International Station Car Park C for £3. Drivers are advised to avoid parking around the premises of local business and to avoid leaving cars on the Thames Way clearway near the roundabout as that runs the risk of being ticketed.

Ed Miller has been Ebbsfleet United's communications manager and programme editor since 2014 and responsible for the club website since 2007. Contact him on ed.miller@eufc.co.uk
PrevPreviousVanarama Stat Attack: Some facts Fleet fans really should know!
NextFleet 0-3 BarrowNext