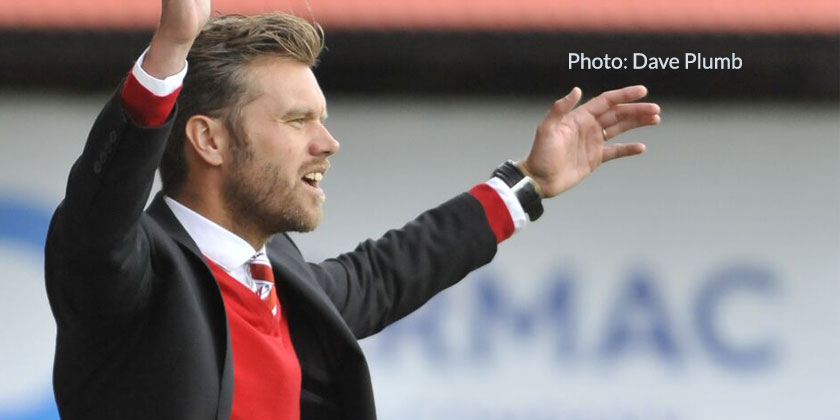 Fleet inspired to hunger for more

Daryl McMahon is not letting Fleet’s recent climb to the top of the table go to any heads as he seeks to maintain the hunger that has seen his side close the points gap in such a short space of time.

And neither is the Fleet boss going to change the mentality and focus of the club which has been driven by a single-minded approach to one game at a time – and a determination not to worry about anything outside Stonebridge Road.

“Everyone at Ebbsfleet – the owner, the board, me, the staff, players and fans – all we’ve got to focus on is this club,” McMahon told FleetOnline. “We haven’t got to worry about anyone else or talk about anyone else. Let’s make sure every time we play a game, we perform. I think we have done that up until now, especially since the turn of the year. Everyone’s been terrific, the fans have been great coming to games home and away and I think we need them more than ever in the coming months.”

McMahon has, of course, had to answer inevitable questions about his side’s prospects now top spot (however temporarily) has been achieved but he’s philosophical about the changing of the guard at the top of the National League South. “The key is not getting too high or too low,” he said. “Win a game, lose a game, we stay in that middle ground mentality and keep a perspective as we have done all season to be fair. I think we’ve focused well all year and just got our heads down and got on with it, regardless of what’s been said externally. And I think we have to keep that together in the run-in now.

“If you think what’s happened since Boxing Day at the top of the table, it shows you can lose top spot as quickly as you gain it so nothing changes for us.”

As manager of the month, McMahon goes into Saturday’s game against the current player of the month (Hungerford midfielder Ian Herring) and the Crusaders are in-form side, second only to Fleet in the points table over the past 10 games.

The Fleet boss expects something of a battle against a well-drilled outfit and he says his players must be up for a battle. “Hungerford are a very good side who have a gameplan and stick to it,” he said. “So it’ll be a tough game for us and we have to be physically ready for a battle. That, first and foremost, is going to be the important thing on Saturday.

“You could say that Hungerford and Poole have been the surprise packages this year. We played both earlier in the season and they’re two contrasting teams. Poole are a lot more possession-based and they’ll pass it around a lot more, Hungerford are more direct but they’re very good at it. They play the ball forward with quality and get onto the second ball quickly. The front boys, Jarvis, Bentley, Brown, Bignall are a handful, and there’s experience there too in Herring, Matt Day and Jon Boardman. But as ever, we must look to play our way and concentrate on what we do.”

Fleet could go into this one with an unchanged line-up for a fourth successive match with the only doubt being Anthony Cook. He was due to train on Thursday and the physio team will check how he reacts to that but McMahon expects him to shake off any problems.

Fleet’s back four has been rigid in recent weeks, with full-backs Marvin McCoy and Jack Connors perhaps the unsung heroes and McMahon is pleased with the current shape.

“As well as Jack and Marvin playing well, Sean Shields and Sam Deering have helped them out with a lot of the defensive work,” McMahon said. “Both of them track back and on Saturday they worked ever so hard. They all compliment each other perfectly at the minute and they’re all good players playing well. They’ve got to keep to those standards, as do all the group. You try to set a bar and not fall below it as a team, it’s tough because you can reach these highs and everything’s great but then you have to maintain it as best you can – and the only way to do that is by working hard and getting the basics right.”

Hungerford, meanwhile, have roared into fourth place ahead of a tough period that sees games against ourselves, Maidenhead United, Poole Town and Hampton & Richmond Borough. If they come through those four games with a haul of points, the declaration of a “three-horse race” for the title will have been very premature.

It is only the Crusaders’ second visit to Stonebridge Road following a 6-1 defeat in the Ryman League Cup 17 years ago but after giving the Fleet a tough game in the 1-1 draw at Bulpit Lane earlier in the season, will be looking to achieve at least the same result from this one. The squad is largely unchanged from the beginning of the season, though manager Bobby Wilkinson has drafted in former Fleet loanee Louie Soares to add some width to his squad and also acquired striker Warren Bentley from Gosport, who has already started finding the net on a regular basis for his new club. Former Fleet striker Liam Enver-Marum had turned out a couple of times recently for the visitors but has since moved on to Chelmsford City.

For all their recent superb form, Hungerford’s record against teams in the top half of the table  isn’t the best, with only three wins from 12 and that’s something they will need to improve on over the coming weeks. There is plenty of experience in the squad, however, with former Oxford United defender and skipper Matt Day lining up alongside one-time Irish international Alan O’Brien (Newcastle United), ex-Woking veteran Jon Boardman and striker Nat Jarvis (Cardiff City, Southend).

Ed Miller has been Ebbsfleet United's communications manager and programme editor since 2014 and responsible for the club website since 2007. Contact him on ed.miller@eufc.co.uk
PrevPreviousDanny delivers his double top
NextFleet 1-0 Hungerford TownNext