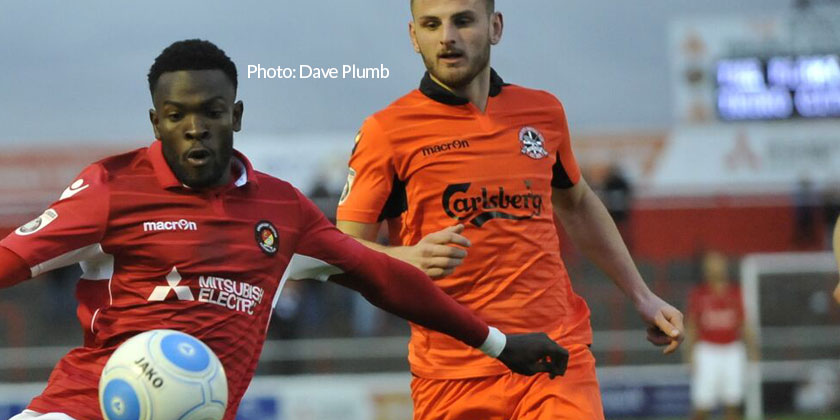 Fleet in search of a City break

Fleet management, players and fans face their longest trip of the season this weekend with three points the only desired outcome from a 600-mile round trip to Truro City.

Confidence is high as Fleet bounced back from their 1-1 draw at Hampton and early concession against Welling to blast five more goals in the pursuit of promotion.

The squad trained at Stonebridge Road on Thursday ahead of their early departure to Cornwall where there will be an overnight stay before the clash at Treyew Road.

With 13 wins and two draws from the 15 league games in 2017, Daryl McMahon’s side are in the middle of one of their best runs of form in living memory, with five games left of the season. Fleet are targeting a 98-point finish, which would be the second best total in the club’s history, but the priority is to reach 86 by 5pm on Saturday.

The Truro pitch should at least be an improvement on last season’s corresponding fixture, when Fleet’s February visit was played amidst 60mph winds and ever-worsening weather conditions on a very heavy and bumpy surface.

Then Truro were chasing a play-off spot, now it couldn’t be more different. Lee Hodges’ side have been pulled back into the relegation fight having lost five of their last six games, including defeat at Margate. Their one ray of light was a win in their last home game, a six-pointer against Whitehawk. But the White Tigers are just four points clear of Gosport, who face Welling this weekend in a game that could see that gap closed further.

Truro could have a say in promotion and relegation issues in the remaining weeks, with ourselves and Maidenhead United the two teams up next at Treyew Road, while the Cornish side also play at Welling and Bishop’s Stortford as they bid to steer clear of 20th place.

Anything Truro can get from games against the Fleet and Maidenhead will surely be seen as huge bonuses ahead of their more winnable fixtures and Hodges has implored his side to treat Saturday’s game as just that. “It’s down to us to give it a real go,” he said. “We have proven on occasions what we are capable of and we need to start showing this on a regular basis. We’re at home and need to make this count.”

Truro gave it a real go for 70 minutes at Stonebridge Road earlier in the season with the score locked at 1-1 until Jack Powell, Sean Shields and Kenny Clark popped up to give the Fleet some late breathing space in a 4-2 win. But just four wins in 2017 has seen last season’s play-off semi-finalists, who were as high as 12th before the new year, slip back into the mire.

Striker Andrew Neal and winger Niall Thompson will be the danger men for Truro with 14 and nine goals respectively, the former having scored twice at Dartford and then grabbed two again versus Whitehawk in recent weeks.

Since last we played, forward Stewart Yetton has returned to the club on a temporary basis from Weymouth, while defenders Alex Hartridge (from Exeter City) and Ben Gerring (from Torquay) are also in on loan.

Off the pitch, the Cornish club also have issues with an earlier announced move to groundshare at Bodmin Town having now been shelved and Truro look likely to stay at Treyew Road, their new development at Silver Bow having been deemed no longer financially viable.

Ed Miller has been Ebbsfleet United's communications manager and programme editor since 2014 and responsible for the club website since 2007. Contact him on ed.miller@eufc.co.uk
PrevPreviousU13s celebrate league championship
NextChris Pilkinton, 1945-2017Next