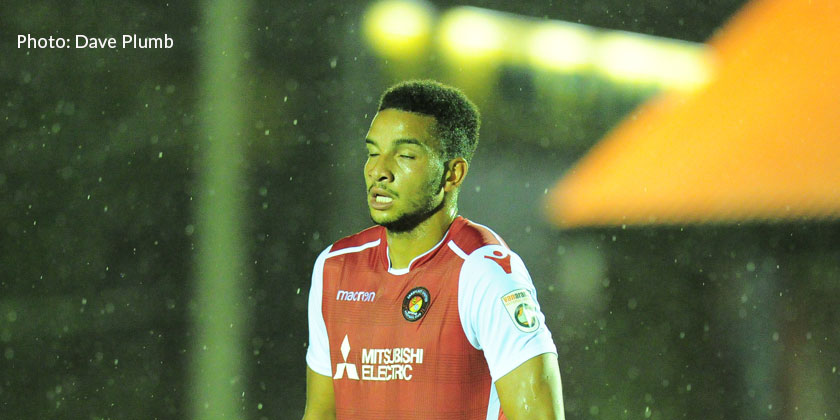 It’s been a while since an evening game under the lights at the Kuflink Stadium and the Fleet will hope to round off their nighttime fixtures this season with a third consecutive win. And with just a three-point gap to seventh place, the manager will have designs on reeling in some of the clubs above them.

Daryl McMahon is determined to see his side’s recent head of steam be maintained but he’s also keen for the squad to give a better account of themselves than last time the two teams met back in November.

“Off the back of two wins, you can see we’ve got momentum,” McMahon said. “We didn’t play particularly well against Woking earlier on. It was probably our worst performance of the season to be honest so in the back of my mind I’ve been looking forward to playing them at home because I think it’s something we need to put right. The performance that night wasn’t anywhere near our level.”

Following that defeat, Fleet embarked on a six-game unbeaten run and that’s the sort of form McMahon will be hoping to recapture. His side have been buoyed by the signing and subsequent debut performance of Corey Whitely, though Tuesday’s team selection was awaiting assessment of Lawrie Wilson and Dean Rance who both departed the pitch at Halifax early.

With Whitely set to make his home debut, other new signings have not been forthcoming early this week though it hasn’t been for the want of trying behind the scenes and it is a situation the club continues to try and evolve.

But McMahon’s priority remains Tuesday night’s 90 minutes and while the manager refuses to overemphasise the Fleet’s return to form over the last two games, he’ll know that the top seven remains in sight.

“This league has been so up and down, any team can win or lose three in a row and people have gone on crazy runs without winning a game,” he said. “We’re just outside of the [play-off positions] but I haven’t changed just because we won. If we were to get in the Top 10, it’s a fantastic achievement in our first season in the division. If we were to get any higher than that, it’d be great. We’ll keep working hard and we’ll see where we end up.”

Woking welcome new blood in the shape of striker Louie Theophanous, signed on Monday from Billericay Town. He last played against the Fleet for Chelmsford City in May’s promotion final and has previously lined up against us for the likes of Farnborough, Staines Town and St Albans City. But it’s Reece Grego-Cox, recruited from QPR, who Fleet’s defence might need to keep an eye on, the 21-year-old having scored twice in four games for the Cards.

Anthony Cook will not be available to the visitors under the terms of his loan and Woking are also minus Inih Effiong, who scored against us in November, and Joe Ward, both of whom earned moves to SPL and EFL clubs respectively in the January transfer window. Manager Anthony Limbrick has brought in Damon Lathrope from Torquay and Jonny Edwards from Hull City to replace them while he will also have the services of former Chelmsford full back Matt Young after his recent suspension for a red card was rescinded by the FA. Winger Bobson Bawling, meanwhile, is long-term injured.

Woking lost for the first time in four matches at Hartlepool on Saturday, conceding three goals in the first-half and a late rally of two of their own in the final five minutes failed to rescue a point. A recent spell of good form has seen the Cards ease any lingering relegation fears and they remain nine points clear of Solihull Borough. But that does not hide the fact they have slipped from a season-high of third place with their victory over ourselves in November their only win in a run of 15 matches either side of it.

Woking’s last visit to the Fleet ended in a 1-1 draw in last season’s FA Trophy. Then, the Cards were just two minutes from their first-ever win at Stonebridge Road until Dave Winfield’s header went in off Joey Jones. While Woking’s record here may be a poor one, Fleet will need to be mindful of how they ended their own winless streak at The Shay last Saturday.

Ed Miller has been Ebbsfleet United's communications manager and programme editor since 2014 and responsible for the club website since 2007. Contact him on ed.miller@eufc.co.uk
PrevPreviousMacca’s massive three points
NextFleet 2-1 WokingNext