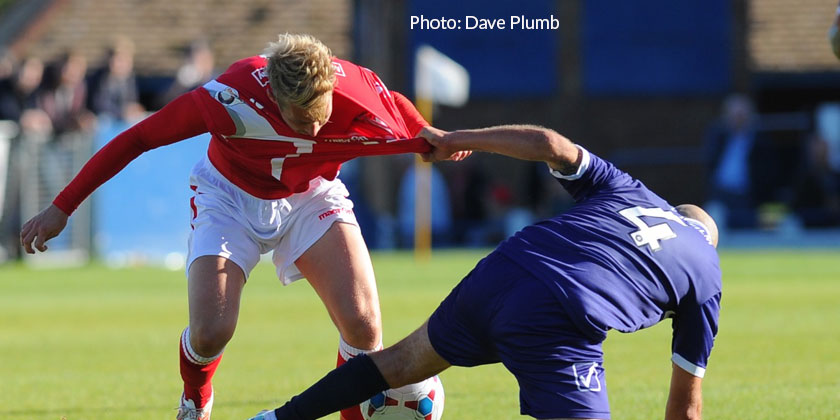 Fleet get set to grapple with the Gate once more

Fleet go into their fifth Kent derby of the season against a rejuvenated Margate whose recent upturn has taken them to fourth in the form table and only seven points from a play-off position.

It’s all a far cry from the meeting at Hartsdown Park in September when the Gate occupied a relegation spot and were finding it hard to score goals. A hat-trick from midfield, seven goals in their last two games and wins over the likes of Gosport, Maidstone and Maidenhead have given Terry Brown’s successor Nikki Bull a dream start to life as a manager and they come to Stonebridge Road – for the first time in a league game in 12 years – fancying their chances of revenge for Fleet’s 2-0 win earlier this season.

Expectations are high that Fleet fans will see Aaron McLean in a red shirt, though what form this will take with existing strikers Danny Kedwell and Matt Godden in such good form is open to debate. Daryl McMahon insisted that McLean’s acquisition was “another option” in attack rather than an “either/or” option where Kedwell and Godden are concerned.

“Matt and Danny have been absolutely terrific all season,” McMahon told FleetOnline earlier this week. “Aaron comes in having won promotions and with decent experience and a good personality and work ethic. If he didn’t have those attributes, he wouldn’t have fitted in here. He’s all-action and presses high up the pitch and gets those ugly goals and picks up scraps, so it’s another option in that position.”

The Fleet boss welcomed the week off after the holiday period of games, noting that plenty of other sides had played little football or had little training by comparison given the weather conditions. “But it’s not something I want to repeat too often,” McMahon said. “It’s the time of the season when you need to build a head of steam and weekends off aren’t always a good thing.”

Joe Howe resumed training this week and Matt Fish is in line for a recall; meanwhile, Kenny Clark rolled his ankle against Truro City but the swelling on that was much reduced. And with the Fleet’s recent switch to three at the back at home and the signing of Bryan van den Bogaert, there is as much question about the likely defensive setup as there will be the front players.

Margate “aren’t likely to leave themselves too open”, says McMahon, who considers them a solid and hard-working unit. “The players are really playing for Nikki Bull,” he said, “and from what I’ve seen and the reports I’ve had, they’re going to be strong.”

Margate’s chief threat comes in the form of Freddie Ladapo, now up to 10 goals after a slow start this season. Midfielder Lewis Taylor netted a hat-trick against Chelmsford last weekend and they also have the former Fleet pair of Luke Moore and Kane Wills just behind Ladapo and strike partner Christian Jolley. Nathan Green, who caught the eye at Hartsdown, also drives a lot of their wide play from the full-back position.

Many of the players lining up against each other on Saturday have played alongside each other previously, with old boys from AFC Wimbledon, Aldershot Town and Grays Athletic amongst other clubs on both sides. Indeed Daryl McMahon comes up against a former teammate for the second home game running, having played with Margate midfielder David Hunt at Leyton Orient.

Fleet have had the best of recent meetings against Margate, winning the last seven meetings if Kent Senior Cup games are taken into account, and they have one more win than Margate in the clubs’ head-to-head stats. However, one result perhaps not figuring in the minds of betting fans is the draw: it’s been a quarter of a century and 17 matches since things ended all square between the Fleet and Margate.

Ed Miller has been Ebbsfleet United's communications manager and programme editor since 2014 and responsible for the club website since 2007. Contact him on ed.miller@eufc.co.uk
PrevPreviousJoining forces
NextHawks take two on loanNext