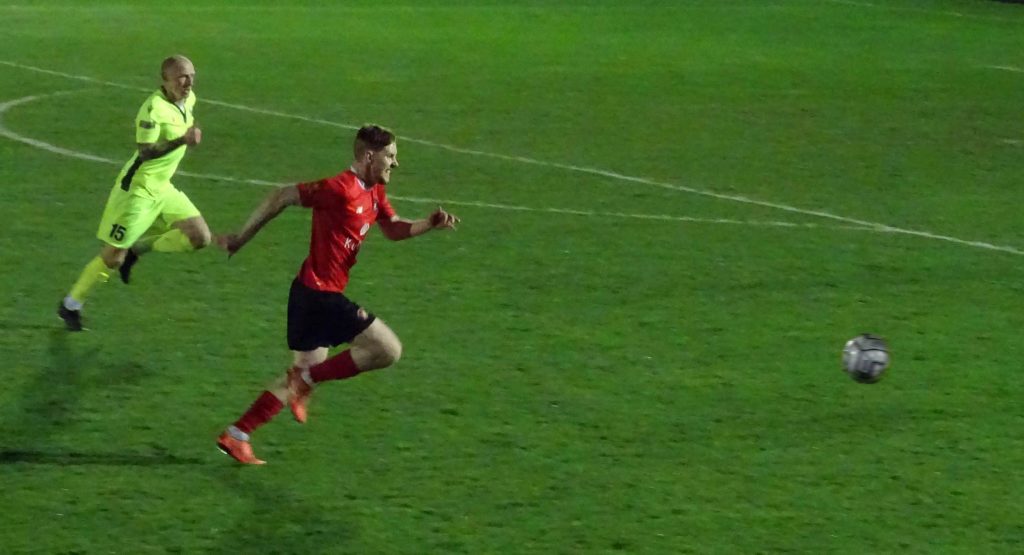 The Fleet came from behind to beat a strong Dorking Wanderers side in a Tuesday night friendly at the Kuflink Stadium.

Switched from Dorking’s Meadowbank due to their pitch being covered in snow, North Kent’s rather wetter weather afforded a playable surface.

In a competitive friendly, Dennis Kutrieb fielded Academy goalkeeper Harrison Firth in the first period and then brought his teammate, young midfielder Issa Sidibe into the fray for the final half hour.

Two trialists also made up the squad of 15 with new loan signing Joe Taylor getting another 45 minutes under his belt. And there was valuable game time for returning Charlie Rowan and Reece Grant.

Fleet held their own against a Dorking lineup that featured much of their first-choice starting eleven but the visitors upped the pressure towards the end of the first half, edging ahead five minutes before the break. The goal came down the left flank when Niall McManus’ delivery was inadvertently scooped over Firth as Jake Goodman attempted to clear.

It was tough on Firth who had made a number of saves and deserved to keep a clean sheet on his 45 minutes in goal.

Fleet made three changes at half-time before introducing Academy midfielder Sidibe with half an hour left. And the equaliser saw Goodman more than make amends for his part in the Dorking goal. It came on 65 minutes, James Dobson’s corner not cleared and it fell for Goodman who belted a rising shot into the roof of the net from eight yards.

It was no more than Fleet deserved for an improved second-half showing and 1-1 looked to be on the cards until the energetic Alfie Egan won it in the dying moments with a brilliant piece of individual skill.

There were 87 minutes on the clock when Jake Gallagher’s tackle ran clear to Egan. The Fleet midfielder advanced from 35 yards, outran two defenders and arrowed an excellent shot that curled up and in, squeezing between the goalkeeper and the near post.

The scoreline could have been extended minutes later when Egan found Alex Eirich sprinting down the right. The German attacker showed a good turn of pace to cut into the box and might have gone for goal himself but unselfishly squared the ball to Allen, taking the goalkeeper out of the equation, but the Fleet winger hit a first-time effort wide.

Ed Miller has been Ebbsfleet United's communications manager and programme editor since 2014 and responsible for the club website since 2007. Contact him on ed.miller@eufc.co.uk
PrevPreviousThank you for Christmas donations!
NextTireless Egan gets his rewardNext