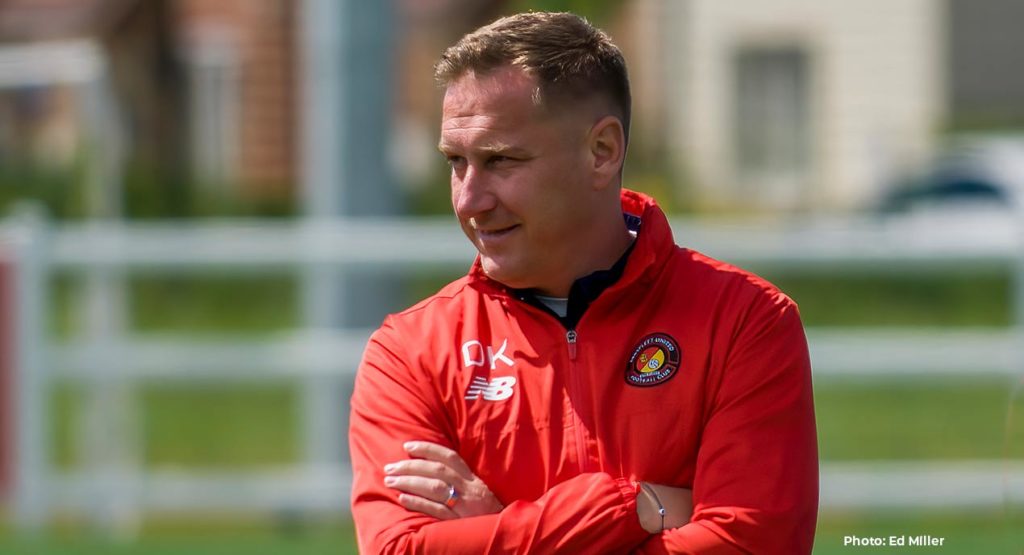 Fleet double down on Dennis’s devotion with new deal

The new deal means the Fleet boss will remain at the Kuflink Stadium helm through to the end of the 2023/24 season.

Kutrieb passed the 50-game mark in charge of the club during 2021/22 and has now managed 71 competitive games in total since joining from Tennis Borussia Berlin in summer 2020.

The 42-year-old guided the Fleet to third place and the promotion final this season, while the team’s record of seven wins and a draw heading into that last match was – alongside the 2016/17 campaign – the best finish to a league season since the club won the Southern League title in 1957/58.

News of his new two-year contract comes ahead of the club’s announcement of its retained list and recruitment plans for the new campaign in 2022/23.

Dennis Kutrieb said of extending his stay at the Fleet, “I am extremely pleased and proud to continue the work we started here. We will definitely be prepared to go again next season but obviously, like all our fans, I am so gutted that it is not to be in the National League. From our experiences of the season just gone, we know what we have to do. And we will stay tight together as one club – as I always ask of the supporters, you are as much a part of that as anyone. Staying strong together is so important to me and to our club because we cannot always influence what happens outside but what we do as a club is down to all of us.

“Coming over from Germany two years ago to work in England was something that drove me. It was not an easy decision at the time to make the move but two years on I know I have made the right decision and so I am of course very happy to stay with Ebbsfleet. I love working for this football club and with the people who make the club what it is – all the staff, players and of course our supporters who I know will be back again and behind us all the way in 2022/23.”

Fleet CEO Damian Irvine said, “Dennis’s impact on our club, from the moment he began work, has been huge. We had a very clear picture of what the club needed in a manager when we began our identification and recruitment process in 2020 and had high demands and expectations. Dennis has shown he was the right choice. He works incredibly hard on a daily basis to not only continually develop and improve his players and our fortunes on the pitch but behind the scenes he drives a positive, winning culture in all aspects of the football club.

“We are building and evolving all the time and Dennis is at the very heart of the ambitious plans of this club. He has come over from Germany, sacrificed and committed to the club and immersed himself in all things Fleet during a very difficult pandemic period and cancelled seasons. Despite this, in his first full season in a very tough league in the English football pyramid, Dennis has delivered exciting, high-quality football and a strong season of results with continual improvement throughout the season. Dennis is a visible and popular figure in the local community with a genuine enthusiasm for and willingness to engage with the club’s supporters. We are very much looking forward to the 2022/23 season – and if season-ticket sales to date are anything to go by, then our fans are backing the boss to the hilt!”

Ed Miller has been Ebbsfleet United's communications manager and programme editor since 2014 and responsible for the club website since 2007. Contact him on ed.miller@eufc.co.uk
PrevPreviousClub update: close-season 2022
NextFleet issue retained list for 22/23Next