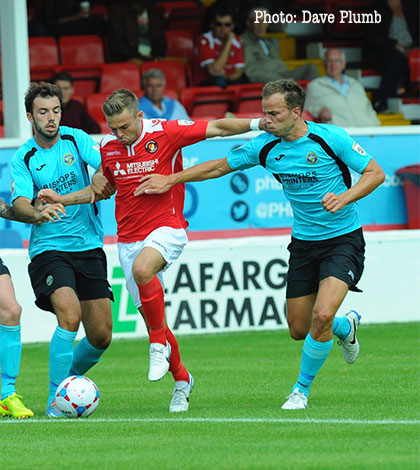 Fleet visit Westleigh Park hoping to summon the spirit of 2010/11 when a 3-2 win at the same venue gave the side some much-needed impetus to push on into the play-off zone and saw the start of a four-match winning sequence – a run Fleet could absolutely do with repeating.

A win over Havant would put Fleet within four points of their opponents with a game in hand, with matches against fellow contenders Concord Rangers and Whitehawk to follow. Jamie Day’s side’s last visit to the south coast saw Fleet take a 2-0 lead against Gosport only to be pulled back by two late goals – a capitulation that cannot be allowed to be repeated if we are to have any designs on the top five places.

With Basingstoke playing Whitehawk at the same time, Fleet can again take advantage of other clubs’ results, but only if they do the business themselves.

After back-to-back wins at Bromley and against Maidenhead, Day is unlikely to tinker with his side too much, even with the impending return from suspension of Kenny Clark. Danny Kedwell remains a doubt and has only undertaken light training all week.

The manager has gone a little easier on his side in training this week having felt they looked tired against Maidenhead – and with Havant’s pitch usually one of the heavier surfaces in the league, he wants his players as fresh as can be.

“It’s a really big game,” said Day. “We’re doing things right but we can still improve and we still have areas to work on. But we’re more resilient, the back four is pretty solid and we’ve got back-to-back wins and a clean sheet to take to Havant. Last week was a disappointing performance and some of our decision-making could have been better; three points was the main thing but that’s in the past now. At this stage of the season, it’s often scruffy but I know from winning the league with Welling, its those sorts of games that get you the results you need over the course of a season.”

After failing to score in three games against Havant last season, the Fleet will take their inspiration from the 1-0 win at Stonebridge Road earlier this campaign – though the starting line-up is likely to feature only Matt Godden of the side who kicked off that game back in August (pictured above).

A little like Fleet’s win last Saturday, Havant & Waterlooville’s three points against Wealdstone was described by manager Lee Bradbury as “…not too appealing. We can play better, but it was all about making sure we picked up all the points on offer.”

After a tricky start, Bradbury’s side have remained fairly consistent throughout the season, hovering around the top eight places with a squad that has remained largely untouched – with Welsh international Brian Stock, recent signing from Portsmouth Nick Awford and one-time Fleet target and former Crawley and Forest Green striker Ben Wright the only new acquisitions of note.

Havant have lost four games at home this season but only one this year (to Concord Rangers) and their overall form, which includes a win at Boreham Wood, is generally good aside from a defeat at Weston-super-Mare.

Their run-in is a tricky one, however, with six of their remaining seven games coming against sides within touching distance of the play-offs and this Fleet fixture is their last home clash before they begin a run of three successive away trips.

Ed Miller has been Ebbsfleet United's communications manager and programme editor since 2014 and responsible for the club website since 2007. Contact him on ed.miller@eufc.co.uk
PrevPreviousA tenner for shirts in kit clearance
NextHavant & W 2-0 FleetNext