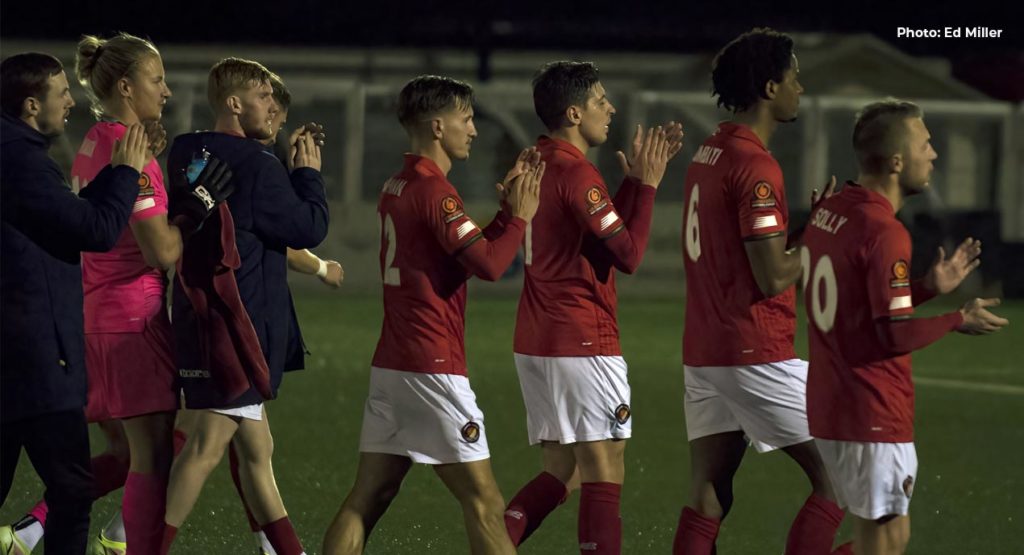 Two wins out of two in January and the first league double of the season has made Dennis Kutrieb a happy man and he was delighted with his side’s dominant victory at Vauxhall Road yesterday. With Hemel having overhauled their side and risen up the table since the Fleet’s 3-1 win at the Kuflink Stadium in August, the men in red repeated the feat away from home to return to the top of the table.

“It was a great performance, a well-deserved win,” the Fleet boss told Charles Webster. “We could have scored many more goals to be fair but they’re a good team, you could see they had some spells during the last 10 minutes before half-time and after we scored our third goal they had a spell where they had a little bit more possession. They haven’t been a big threat but they can cause problems and we knew since the new manager came in they’ve changed their way of playing massively.

“So they did many things right here and had some great results in the past. Of course we knew about their negative home record but it doesn’t matter if you’re on a run and you get good results against Havant or St Albans. Again I’m very proud because it’s not an easy place to come and especially when you come to this place after a derby win, you need to make sure that you get another three points and I think the response was really great from the boys.”

It was Fleet’s first of three consecutive games on 3G and having never been one to talk up the differences of such surfaces, Kutrieb said it may actually play to his side’s benefit in a traditionally wet and muddy January.

“I think the boys like to play on 3G in general because they they know how to move the ball,” he said. “It’s not bobbling or whatever and sometimes you prefer it when it’s bad weather and raining. Maybe now it’s exactly the time so it could be good timing for us, when you need to play at St Albans for example or when we played Hampton last season or other places where it can be really difficult to play on a grass pitch then of course you prefer to play on on a 3G. For me personally i always love to play on grass and I think the boys love to play on grass as well but they don’t care, they play on 3G as well because they’re good enough to play there.”

Fleet’s three-goal blast maintained the team’s record as having the best goal difference in the division and being second highest goalscorers behind Dorking Wanderers, but Kutrieb’s not too worried about those statistics just yet, even though he acknowledges the top positions are tight.

That goal difference might easily have been enhanced by one had Rakish Bingham’s first-half strike not been ruled out for offside, apparently against Greg Cundle, with the Fleet boss convinced at the time that the goal should have stood.

“I’d say I put a big question mark on [the decision],” he said. “I didn’t see it on the video so far but I will have a look. But I would bet that it is not offside because even when he touched the ball it was very close so I can’t imagine that was offside. Of course, it would help a little bit more if you’re 2-0 up for half-time but anyway the boys managed to get another two goals in the second-half and played a good game. I was a little bit unhappy that we didn’t have a clean sheet because I think they deserved it, especially Chris Solly who had an outstanding game and it’s been massive what he’s done for us in the last [few] games.”

Fleet now have a two-week wait for the next action due to St Albans’ involvement in the FA Trophy – the small matter of a visit to Dorking is next on the fixture schedule! – but Kutrieb would rather be out there again this Saturday.

“Definitely we are unhappy that we have to wait now two weeks,” he agreed. “But then we have 10 really tough days in front of us with four games so we need to be ready and prepare the opponents. But I’m really looking forward because I’m confident as always, I’m positive as always and I saw a great performance.”

Fleet fans can rest their voices for another weekend, however, after they departed Vauxhall Road in fine cheer, a fact once more acknowledged by their manager.

“I’m very thankful for them,” he said. “For each and every single one who’s travelled to see us. We don’t take it for granted and you can see the boys after the game go and say thank you. There’s a good bond between them and that’s how it has to be and we just need to keep working hard on the pitch and then [the fans] will always help us, they will always push us and and do what they can do and that’s very much appreciated.

“As I said, Hemel did really well in the last weeks and got some great results so if someone thought we can go here and get an easy, win definitely not. The boys put a great shift in again and made me really proud for the second time in January.”

Ed Miller has been Ebbsfleet United's communications manager and programme editor since 2014 and responsible for the club website since 2007. Contact him on ed.miller@eufc.co.uk
PrevPreviousHemel Hempstead Town 1-3 Fleet
NextLimit on away tickets in place for Maidstone gameNext