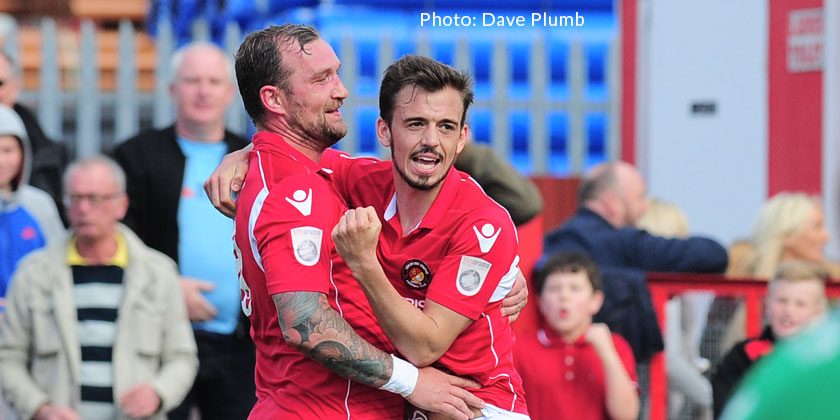 Daryl McMahon’s biggest positive from this afternoon’s 5-1 demolition of Welling United was the way his players rallied and fought back in the first-half after falling behind to a 7th minute goal.

“I’m most pleased with the first half because we showed good quality in getting the ball down and passing,” McMahon told BBC Radio Kent’s Charles Webster. “And we believed in what we were good at.

“I thought we were very good after going one down. We had good composure, created a lot of chances and deserved to be 3-1 at half-time. They couldn’t get out really after the first five or ten minutes and were boxed in their own half… after a good start by them to be fair. Darren [McQueen] had two or three good attempts and on another day he could have scored them and as everyone knows goals change games. The whole play in the first half we were getting in between them, it was just about scoring the chances we created.”

And having watched as Welling saw off the challenge of a young Charlton Athletic side in midweek, McMahon knew his side had to be on their game this afternoon.

“They’ve got some good players. [Rhys] Murrell-Williamson, [Dan] Walker are two very good players,” he said. “They probably shouldn’t be where they are in the league when you look at the names on paper but I think we ran out comfortably in the end. A whole host of people had good games today. Jack Powell, Drury, Kenny Clark was outstanding again. ”

And McMahon was clear that the referee got the two big calls right – sending off Danny Waldren and awarding a first-half penalty – though was convinced a handball decision should have come earlier.

“Someone on the bench said it was three handballs for one penalty. The one before the penalty, when Darren won it back off the lad and it went off for a throw-in, he handballed that as well. I didn’t see the last one but the first one was a definite penalty.

“And it was a definite red. There’s nothing you could do about that. He’s left Darren who was going to do him one v one and he pulled him back.”

Fleet travel to Truro City next – where Maidenhead also have to visit – as the manager continues to concentrate only on his own side’s results. “We’ll go down there, it’s a difficult place to go, it’s not the best pitch but we’ll look forward to it.”

Listen to full interview below.

Ed Miller has been Ebbsfleet United's communications manager and programme editor since 2014 and responsible for the club website since 2007. Contact him on ed.miller@eufc.co.uk
PrevPreviousFleet 5-1 Welling United
NextU13s celebrate league championshipNext