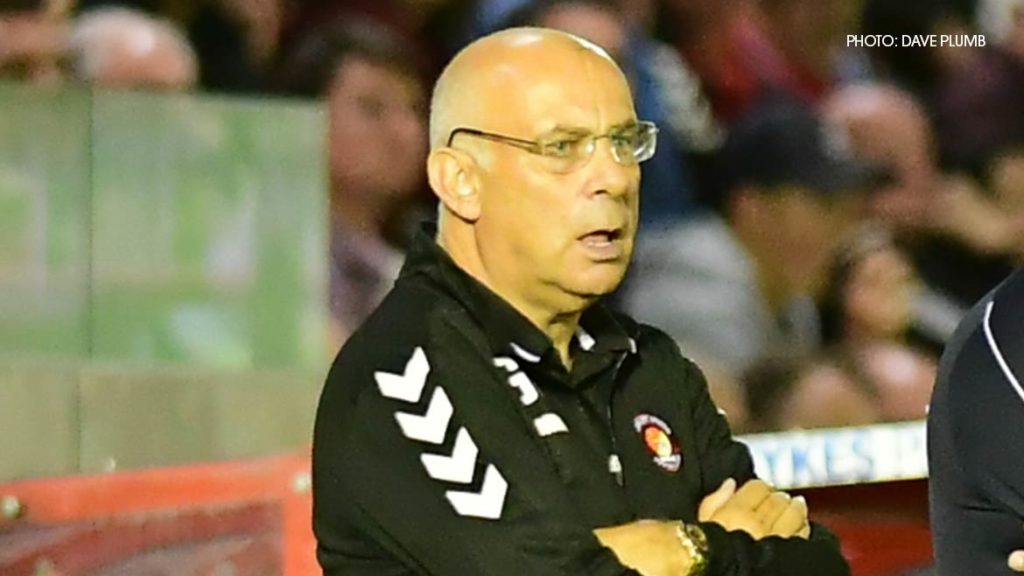 Garry Hill saw his side take the lead for the first time this season before succumbing late on to the league leaders but he remains upbeat that his players are capable of climbing the table.

“The league table doesn’t tell lies but we’re not a bottom-of-the-table team,” he said. “And as soon as we get a result, I’ll think we’ll move on and go in the right direction, I’m pretty confident of that.

“The players are desperate to do well. We’re very disappointed and unlucky we haven’t got at least a point and the travelling supporters who witnessed the game today, if you said who was top and who was bottom, it would be a hard one to call. They’re where they are in the league. They’re a good side but a very relieved side today. But that doesn’t change our circumstances or position.”

Solihull certainly had to work harder for the points than their 6-1 win in midweek suggested they might and the Fleet boss felt his side matched the unbeaten Moors for long periods.

“It’s nice of Tim Flowers to be saying, ‘you’re unlucky, you were worth a point’ but that don’t help us where we are,” said Hill. “I was pleased with how we shaped up. The league leaders haven’t really caused us too many problems. We’ve picked a team and formation, the first time we’ve had three centre halves at the club where we want to play that way. Bondz N’Gala has not played at all since last season, he’s short of games, but he equipped himself very well. Grimes was immense at the back, I think he looked commanding. I’m hurting, we’re all hurting, with the manner of the goal and what’s gone on the start of the season. But no excuses.”

The manager remains concerned that the results are turning on mistakes and that remains his number-one priority to eradicate.

“It was nice to get the first goal today, it gave us something to look after and I think we did look after it. They have not earned their goals. They scored with their first attack and a cheap free kick to give away by Jack King on the edge of the penalty area. The boy’s bent it over in the top corner and I think it gave them a little lift going into half-time.

“The second half I thought we started the brighter and I didn’t see them causing us any problems. You’re analysing the game and I felt confident and comfortable where we were at that time. There was no need to panic but only once, that lack of concentration has punished us dearly. We’ve switched off from a ball in an area that shouldn’t have caused a problem and too many players switched off, the lad’s run down the side and it looks like Ash has parried it and it’s hit Kingy on the back. They never had a forward in there. That sums it up, that’s where it is.”

And while the league table no doubt continues to depress Fleet fans, their boss believes his squad have what it takes to climb away.

“I take positives with the performance today and the Fylde game,” he reiterated. “It’s a case that at the moment we do get punished and that’s where we’ve got to stop defensive mistakes. We gave ourselves a positive platform to build on this week going into the Bank Holiday.

“After May and June, we’ve always been a little bit behind and we’re still a little bit behind. But we’re getting there. You can’t feel sorry for yourself. I want to get back out on that park and get a result but I’m sure it’ll come.

“Out of the 18 players we’ve got at the football club, 14 are new. Sometimes it does gel, sometimes it takes time. I can’t walk away from the last two away games and take negatives. I can only take positives against sides who we’ve played who I believe will be there or thereabouts at the end of the season. There’s not much in it, it’s a very thin dividing line, a lack of concentration. And that’s where we are.”

Ed Miller has been Ebbsfleet United's communications manager and programme editor since 2014 and responsible for the club website since 2007. Contact him on ed.miller@eufc.co.uk
PrevPreviousSolihull Moors 2-1 Fleet
NextWe have to make teams earn goals, says WestonNext