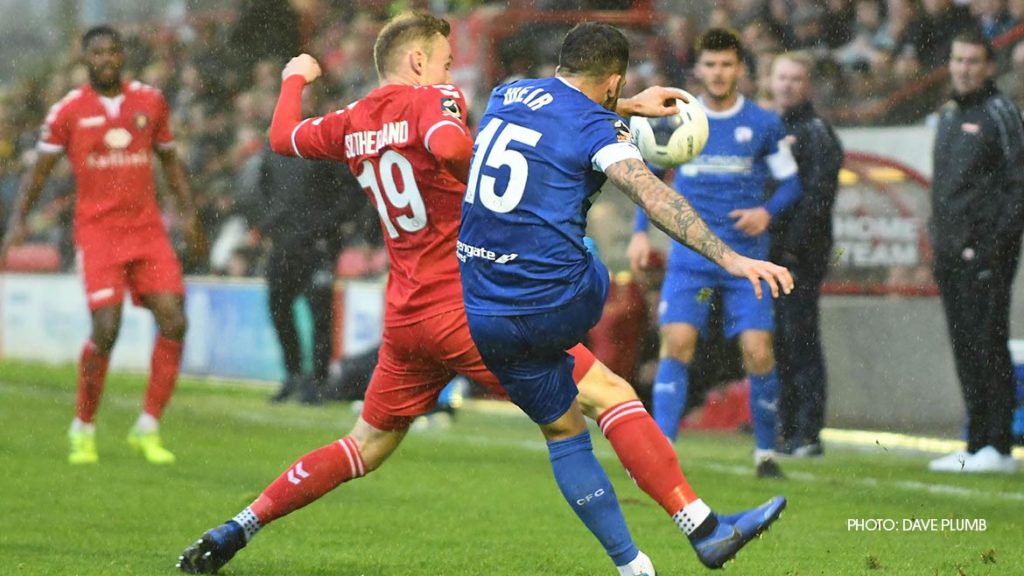 Fleet aiming to create a splash in Pools visit

Two weeks ago, Saturday’s fixture might have featured a head to head between two caretaker managers in Kevin Watson and Anthony Sweeney.

Now, with Watson confirmed in his role and former AFC Fylde boss Dave Challinor having gotten his feet under the desk at the Super 6 Stadium, it’s a clash of two sides keen to continue impressing their new managers.

Fleet are urgently in need of another win on home soil to go with the 3-0 defeat of Barnet and will look to build on a 2-2 draw v Chesterfield and a very close call in the FA Cup last week against Notts County.

It will need to come with one enforced change and possibly another as Harry Palmer replaces the China-bound Jordan Holmes in goal while Albie Morgan comes back into the reckoning.

Further changes could still be afoot with the Fleet boss not afraid to make switches for tactical reasons, as he did with the Alfie Egan-Frankie Sutherland swap against Notts County.

Fleet have a good record against Hartlepool, winning three and drawing one of the four meetings between the sides – and Pools have yet to even register a goal in any of those games.

But they approach this game with plenty of goals in the tank, having travelled to Yeovil in midweek and fired four past the title hopefuls in the FA Cup. That follows on from taking a 2-0 lead in a draw at Meadow Lane the week before and a 3-0 win at Aldershot, with Pools’ confidence on the road growing all the time.

Since dismissing boss Craig Hignett five weeks ago, Hartlepool have won four, drawn one and lost one and apart from ourselves boast the best goalscoring record in the bottom half of the division.

Their front line of Nicke Kabamba and Gime Touré have both scored against the Fleet in recent seasons, Kabamba having netted the goal for Aldershot in our play-off eliminator. Touré, meanwhile, scored for both AFC Fylde and Sutton United against us last season and has seven goals to his name this season.

Fleet will also need to get to grips in midfield, with Irishman Gavan Holohan having scored three times in recent weeks while Pools have plenty of power and experience alongside him in Ryan Donaldson and Nicky Featherstone. Gus Mafuta completes the midfield quartet having won promotion last season with Salford City.

Having returned from Yeovil in the early hours of Wednesday morning, Challinor and his squad face the 540-mile round trip to Kent. Like his opposite number in the Fleet dugout, Challinor is keen to play attacking football.

He’ll need to do it without long-term absentee, winger Luke Molyneux. Midfielder Luke Williams is struggling for fitness after coming back from injury while Holohan will face a late examination on a knock he took in midweek.

The match is not segregated and Hartlepool United fans are able to use home bar facilities. Car-parking is available at Ebbsfleet International Station Car Park C for £3. Drivers are advised to avoid parking around the premises of local business and to avoid leaving cars on the Thames Way clearway near the roundabout as that runs the risk of being ticketed.

LV BET are an official partner of The National League. For more information, visit https://lvbet.com/

Ed Miller has been Ebbsfleet United's communications manager and programme editor since 2014 and responsible for the club website since 2007. Contact him on ed.miller@eufc.co.uk
PrevPreviousZach on track with Merstham loan
NextFleet 2-2 Hartlepool UnitedNext