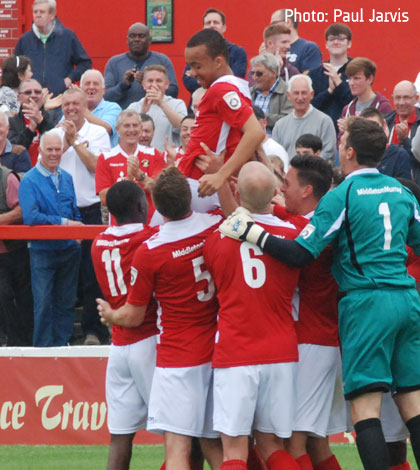 Fleet triumphed in perhaps the most one-sided game seen at home for many years and their exploits produced a number of talking points: there was Matt Godden’s hat-trick, there was a superb debut goal from Academy prospect Karn Miller-Neave and there was the Fleet’s biggest FA Cup victory since they beat Godalming & Guildford the year we went to Aston Villa.

Steve Brown made two changes to the side that beat Sutton, Shane Huke replacing Anthony Acheampong and Godden taking Billy Bricknell’s place up front. He will have warned his charges against giving Hythe any foothold in the match and his players carried those instructions out to the letter, scoring within a minute and a half of the kick-off.

Joe Howe’s deep cross saw Charlie Sheringham hit the crossbar with a header for the second game in succession and Godden reacted before goalkeeper Dan Eason to scoop it into the net to give his side the perfect start. That start got even better five minutes later when Godden was felled as he turned inside the box and Sheringham stepped up to drive a penalty down the middle as Eason dived to his right.

That two-goal burst rocked the visitors but they managed to collect themselves and stem the tide, though rarely spent an extended stay in the Fleet half. Eason kept them in the tie with a number of decent saves, first from Godden and then an excellent stop to claw out Matt Johnson’s goalbound header. Cook had a wild shot fly off target and Godden guided it back towards goal but it drifted just wide before Eason again came to Hythe’s rescue, saving twice from Sheringham.

Just as Hythe seemed to have weathered the storm, and indeed enjoyed their own five-minute spell in the final third, Fleet opened them up again. Three minutes from half-time Cook split the defence with a pass down the left and Godden ran on to it, chipping the ball over Eason and into the net for 3-0. Almost immediately it was four. Godden pounced on a poor clearance from the restart and Sheringham had an easy chance for 4-0. And the livewire Godden had the ball in net again with another chip over Eason but this time the offside flag denied him.

After that somewhat devastating display of forward power, it was little surprise that the second-half took a while to stir the fans into further excitement. Godden wasn’t far off his third goal on 50 minutes when Johnson delivered a weighted pass into the box but he fired just high and wide of the target.

Further chances came Fleet’s way and Godden saw a header blocked on the line before Dean Rance’s shot was denied by a combination of a defender and the post. Brown brought on Miller-Neave at left-back, letting Aiden Palmer drift forward, and he had a real impact on 74 minutes. Fleet had a free-kick from 20 yards on the right. It was classic McMahon territory but he invited Miller-Neave to try his luck. The youngster wasted no time in upstaging his boss and hit a quite wonderful curling shot around the wall and out of reach of the goalkeeper to bring the PHB Stadium to its feet. Not since Kwesi Appiah had scored against Woking had a youth-team player made quite such an impact. Miller-Neave wheeled off in celebration and rightly so, it was a stunning debut goal.

With the fans energised again, Fleet closed the game out in style – but only after Hythe had spoiled Hall’s day with a goal when substitute Craig Thompson set up Sam Conlon for a consolation. Stung by the goal, Fleet replied and Cook delivered a perfect cross to Palmer’s head and all he had to do was steer it past Eason.

All the fans wanted now was a Godden hat-trick. But time and chances were ebbing away. Cook wasted an effort with Godden well-placed and Bricknell’s shot was charged down – but there was one last chance. With Fleet playing it around the edge of the box, substitute Jordan Sanderson lofted a ball into the danger area and though it looked like it might have too much pace on it, Godden sped in to fire it past Easton for his much-desired hat-trick.

Hythe may not have provided the obstacle that FA Cup history is made of, but Fleet produced a convincing display nonetheless to keep the fans on cloud nine and expectant ahead of Monday’s draw for the next round.

Ed Miller has been Ebbsfleet United's communications manager and programme editor since 2014 and responsible for the club website since 2007. Contact him on ed.miller@eufc.co.uk
PrevPreviousClarification on U12s admission
NextFleet home again after cup drawNext