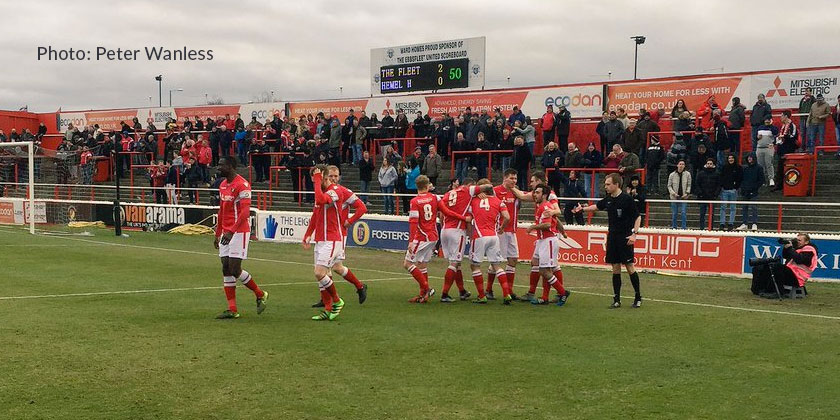 Fleet fans have long been waiting for their side to put another to the sword but few expected to be served up the biggest league win for two-and-a-half years – and the biggest at Stonebridge Road since February 2004. Hemel were one of the few sides to have scored more goals than the Fleet this season, five more to be precise, but the home side overhauled that by the final whistle courtesy of six different goalscorers.

Daryl McMahon’s reshuffled team went to town, with five goals in the second half, skipper Danny Kedwell and strike partner Charlie Sheringham leading the line with finesse. Sheringham earned a surprise start, his first league start of the season, and alongside him Matt Fish, Jordan Parkes and John Paul Kissock were back, with Dean Pooley, Dean Rance, Aaron McLean and Sean Shields making way.

Hemel’s confident start belied what was to follow as they whipped in a couple of corners and crosses that had Fleet breathing a collective sigh of relief. But it was Stuart Lewis’s cross in only the second minute that almost opened the scoring as he got behind the Hemel defence courtesy of Sam Deering’s pass and placed the ball just behind the six-yard box but Sheringham had advanced a yard or two ahead of it and couldn’t bring it under control for a shot on target.

Sheringham’s running, with Kedwell buzzing to either side of him, gave Fleet’s front line a much busier look but several offside decisions interrupted Fleet’s flow up top. On 23 minutes, Sheringham almost broke the deadlock, lobbing the ball over Jamie Butler and being unlucky to see Harry Hickford arrive in time to swipe it off the line.

But three minutes later, Fleet killed off Hemel’s adventurous start. Sheringham robbed Jack Kelly on the edge of the box and managed to lay it off to Kedwell in a central position who held off his marker and picked his spot with a driven shot low to the goalkeeper’s right.

The goal gave Fleet the impetus they needed to grind Hemel down and Hickford again had to come to the rescue, doing just enough to put Sheringham and Deering off as they came for a cross into the six-yard box. Deering wasn’t far off with a curling shot from 20 yards after he brought the ball down and moved inside a defender whereas the best Hemel could muster was Graeme Montgomery’s shot from distance that had Nathan Ashmore back-pedalling.

There were a few niggly challenge in the first half that necessitated the referee calling back play on several occasions and earning himself a scolding from the Hemel bench at half-time. Coming off that bench for the start of the second half was veteran midfielder Matthew Spring for Hemel but the swap wasn’t enough to stem the red tide that was about to engulf the visitors.

It took Fleet five minutes to score their second and, like the first, it came as the home side harried a defender into a mistake. Bryan van den Bogaert won the ball from Ben Herd and played Kedwell in. The stand-in Fleet skipper powered forwards into the box, playing a pass to Lewis on the right who fired past Butler for 2-0.

Nikolay Todorov’s bicycle kick over Ashmore’s goal was the closest Hemel came to clawing their way back into the game, but after that Fleet took total control. A third goal followed on 62 minutes, Kenny Clark climbing highest to head home Jordan Parkes’ corner, before an unlikely fourth goalscorer arrived in the shape of Matt Fish five minutes later. This time, Sheringham was the supplier and though he could have easily gone for goal himself, he passed it out right where Fish was speeding in off the flank to sweep the ball past Butler.

Fish had another effort float narrowly over the upright before the 72nd minute yielded a fifth goal, Parkes  zipping through a gap in defence to find Kedwell in acres of space. His shot cannoned back off the post but Parkes was there to scoop it over the goallline for 5-0. And two minutes later it was 6-0 when substitute Sean Shields skipped over a defender’s leg and guided in Fish’s cross from the  right.

Fleet didn’t exactly take their foot off the gas for the final 15 minutes but there were fewer chances as Hemel looked to simply minimise the damage. Lewis almost scored a great solo second, chipping the ball over Butler but not quite connecting with the downward movement at the other side before he limped off with a knock to his knee late on.

The final whistle was greeted with a standing ovation by Fleet fans who revelled in a home display that sent a message to their title rivals that recent draws had not dampened Fleet’s winning mentality.

Ed Miller has been Ebbsfleet United's communications manager and programme editor since 2014 and responsible for the club website since 2007. Contact him on ed.miller@eufc.co.uk
PrevPreviousNo doubts we can see the job through, says Macca
NextFleet provide opposition for Darts testimonialNext