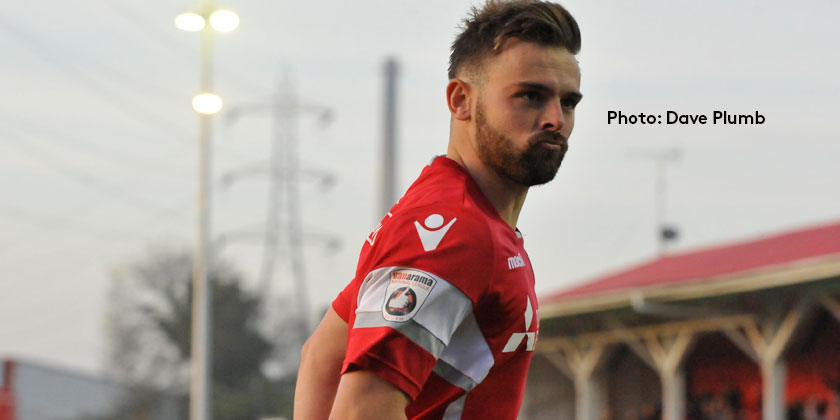 Matt Godden reached 30 career goals for Ebbsfleet United this afternoon and added another hat-trick to his record as Fleet’s first-half blitz put the game beyond Bishop’s Stortford’s reach.

Fleet made the most of a first-half in which they were forced to deploy three central defenders after the late withdrawal of Joe Howe. His replacement, Aiden Palmer, was also unable to play after the visitors questioned whether he could start having not been named on the subs’ bench. In the confusion, the kick-off was delayed and it was Anthony Acheampong who eventually lined up in the No.3 shirt.

After a scrappy opening with neither side able to get the ball down and create anything, Fleet’s opening goal came somewhat out of the blue inside six minutes. A ball into Danny Kedwell on the left edge of the penalty area saw him create space to put across an excellent floated cross that Matt Godden met with his head at the far post, nodding it down past the outstretched arm of goalkeeper Tom Lovelock.

But Stortford almost shoved any cheers back down Fleet throats as Morgan Ferrier was given acres of space down the left to advance and although Tom Bonner cut across him to tighten the angle, Ferrier lashed a shot against the bar, with Brandon Hall possibly tipping it higher as it flew goalwards.

That was really as much opportunity as the visitors saw in the first half, however, and Fleet proceeded to dominate possession and, for once at home, turn that possession into goals.

A second goal duly arrived on 23 minutes in the sort of incident that in previous games has seen Fleet cursing their luck. Kissock brought down a ball in a central position and lashed it low towards goal where Lovelock got down well to save. Godden was instantly on the rebound but saw it blocked on the line and then Bonner slid in and, despite his first effort hitting a defender, he was able to force the ball over the line with his second attempt.

The visitors were struggling to retain the ball and Fleet could have been further ahead when Johnny Herd was sucked into the middle and Kissock spotted Matt Fish in the clear out wide, but the Fleet No.2’s decent shot just cleared the upright.

The third wasn’t much longer in arriving, however, and it was Kedwell the creator again on 42 minutes. A long ball from Tom Bonner fell to Kedwell who held up play long enough for Godden to burst through the middle and Kedwell’s side pass was timed perfectly for his strike partner to run on to and tuck past Lovelock for 3-0.

Palmer replaced Acheampong for the second half while Stortford were forced to remove top scorer Elliott Buchanan, both players carrying knocks from a tangle with each other in the first half. And the visitors made a much more even contest of the second period, with Fleet perhaps guilty of taking their foot off the gas as the game wore on.

A couple of corners went the visitors’ way early on and Frankie Merrifield wasn’t far off with a rasping shot at the near post that a diving Hall put behind. But Fleet picked up soon after that and Jordan Parkes had a low shot tipped behind by Lovelock and saw a free-kick go the same way. Fleet looked to have put the game well beyond Stortford on 70 minutes when substitute Danny Haynes, played in by Kedwell, stabbed the ball into the danger area where Godden picked it up, turned quickly and fired low past Lovelock for his hat-trick.

Fleet fans sensed a fifth goal but it was the visitors who made the last period fairly torrid viewing for the home faithful as they staged a mini-revival. On 75 minutes they pulled a goal back when Merrifield danced through midfield, cut through the Fleet defence and deposited a shot past Hall for a very good solo goal. Seven minutes after that, Ferrier carved an opening from close range, loosing off a shot despite the attentions of Fleet defenders that came back off the woodwork and landed at Kieran Bywater’s feet, who stroked it home for 4-2.

Fleet’s calm assurance of earlier suddenly vanished and confidence flowed through the visitors, who pinged a shot across goal and another Bywater effort fizzed just past the post. Fleet could have added a fifth, however, when Haynes set up substitute Charlie Sheringham who was in the clear but couldn’t beat Lovelock and the goalkeeper then saved again late on from Haynes.

The task proved beyond Stortford, however, and they had to settle for a brave but unsuccessful late fightback as Fleet secured the three points to take them seven points clear at the top of the table.

Ed Miller has been Ebbsfleet United's communications manager and programme editor since 2014 and responsible for the club website since 2007. Contact him on ed.miller@eufc.co.uk
PrevPreviousMacca looks to add precision to performance
Next“Match officials need to have proper coaching”Next