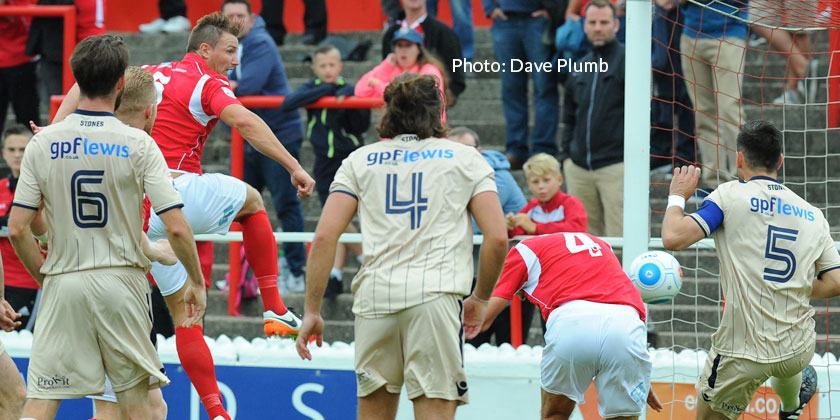 Fleet smashed four goals at home for the third time this season to provide some much-needed cheer after back-to-back defeats and it was another first-half masterclass that underpinned the victory.

Our first win over Wealdstone at Stonebridge Road for 22 years even arrived despite Fleet’s third missed penalty of the season but that was quickly forgotten with the impressive three points in the bag.

Daryl McMahon was able to welcome Mark Phillips back in a three-man back line and he replaced Jack Connors, while Danny Kedwell slotted in up front with Charlie Sheringham dropping to the bench.

It was an attacking setup and Fleet didn’t disappoint as they set about their opponents with eagerness. With Kedwell, Sam Deering and Anthony Cook looking to get in behind the visitors’ line early on, full back Ciaron Brown was under plenty of pressure and Fleet’s first decet chance arrived on nine minutes. Jack Powell floated a corner on to the head of an unmarked Kedwell and his knockdown to Aaron McLean was headed on target but blocked on the line and hacked away with Fleet fans claiming it had gone across.

Omar Koroma almost fashioned an opening for Wealdstone  on the counterattack but it was as close as the visitors came to troubling Nathan Ashmore in the first half. Fleet continued to press and McLean did well to divert a high ball with a cheeky back-heel in mid-air to send Deering through but his path to goal was blocked.

Sean Shields did very well to win a free-kick wide on the left on 16 minutes when he was sent tumbling by Jack Smith and Powell’s set piece was only inches away from McLean’s head. When not scoring from free-kicks, Powell did the next best thing and set a goal up for himself from one as when the ball came back out to the edge of the box, Powell struck it low past Jonathan North for 1-0.

The home side took just six minutes to extend their lead. A swift break forward found McLean and he slipped an excellent ball wide that Deering and Shields both left for Kedwell to run on to. The Fleet striker pulled back inside and made it look easy as he fired home his third goal of the season.

Fleet were rampant and Wealdstone could barely muster a spell out of their own half. Deering’s shot from the edge of the box was spilled by North and Deering almost followed up as he ran on but saw his second contact with the ball blocked.

On 27 minutes, Wealdstone were well and truly on the ropes as Dean Rance forced his way into the box and was tripped on his way through. This time it was Deering to take on the spot-kick duties and he shot wide and high of North but the goalkeeper got a hand to it and gathered the loose ball to deliver Fleet’s third missed penalty of the season.

The miss didn’t upset the home side’s rhythm, however, and North was the hero again as he got down well to stop Shields who had cut a way into the box and got a shot on target while Deering almost made amends for his penalty miss with a shot through a crowd of players that went just wide.

Cook had the gall to nutmeg Brown with another attack and his deep cross floated just too high before the lead was extended on 35 minutes. A Powell corner was hoisted into the box and Phillips rose majestically to power a header past North.

The exact same move almost produced a fourth moments later, Phillips’ header this time stopped by North on the line before the Stones eventually cleared the ball as it bounced invitingly in the six-yard box. Powell’s corners were creating havoc every time and yet another delivery saw Dave Winfield beat North with a header but the linesman flagged to indicate the ball had gone out of play from the set piece.

Emerging for the second half, the Stones simply had to get better and they did, digging in and getting to grips with the midfield to a far greater extent than they did in the first 45. Fleet still came forward with purpose, however, and Deering was busy breaking up play and then offering himself for crosses from wide.

It was Wealdstone who struck first though, and top scorer Elliot Benyon was immediately on to a ball forward, striking beyond Ashmore and off the inside of the post to peg the Fleet back to 3-1. It gave the Stones some hope and Koroma’s forays from his left-wing position unsettled the Fleet defence for a while, but much of the visitors’ attacking play was limited to long-range shots and Danny Green sent several efforts off target.

Before the home crowd could get too worried, their side shifted back up the gear as the minutes ticked down and they created chances again. A delightful crossfield pass from Cook picked out Shields and his ball to Powell was rasped first-time, just over the bar. Green and Benyon missed a couple of efforts at the other end before Fleet wrapped it up with nine minutes to go.

Cook again threatened with a run down the right touchline and his high ball into the box outfoxed North, looping over the goalkeeper and in for 4-1.

That allowed McMahon the breathing space to make three substitutions and one of them, Darren McQueen, showed an immediate burst of energy to outpace Cox and supply Deering, whose shot was chased down and cleared. Fleet could have made it five in time added on when Phillips got forward again and his goalbound header was only thwarted by the outstretched leg of the keeper on the line.

All in all, it was a performance that will have delighted McMahon after a week he admitted was his most difficult in management and Fleet will head to BIshop’s Stortford on Tuesday in a confident frame of mind.

Ed Miller has been Ebbsfleet United's communications manager and programme editor since 2014 and responsible for the club website since 2007. Contact him on ed.miller@eufc.co.uk
PrevPreviousManager’s Notes 10.09.2016
NextDr Abdulla happy with showing on and off fieldNext