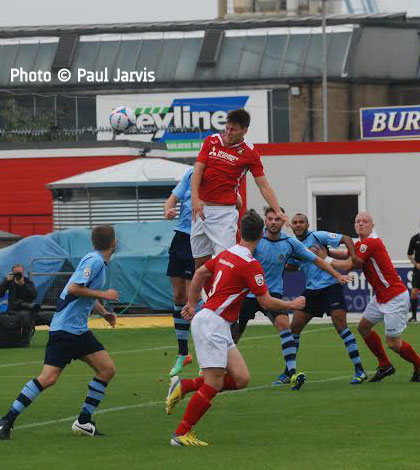 The challenge Steve Brown set his players was for more ruthless finishing – and they delivered as they put 10-man St Albans City to the sword, both strikers grabbing a brace and both unlucky not to notch hat-tricks.

On Non-League Day, there was entertainment aplenty for the 1,034 spectators, especially in a breathtaking final 25 minutes that could have seen the home side score even more.

Fleet made a number of changes to their starting lineup, with Alex Osborn and Charlie Sheringham recalled, while Shane Huke filled in at right-back for the injured Chris Sessegnon. Matt Godden, Tommy Fraser and Matt Johnson had to make do with places on the bench as Dean Rance also earned his first start of the season.

From the first whistle Fleet looked much more lively than of late but they took six minutes to get a sight of goal, Daryl McMahon’s shot going well wide of Joe Welch’s goal. But Fleet were only marking their territory and six minutes later they were ahead. McMahon was involved again, winning a corner with a blocked shot. He took the set piece, delivering a high cross towards the near post where Charlie Sheringham got a clean head on it to send the ball beyond Welch and record Fleet’s first goal in a first half this season.

Both Anthony Cook and Sheringham again won corners with efforts that weren’t too far off but Fleet weren’t long in doubling their lead. Cook won a free-kick 25 yards out on the left wing. McMahon hurled the ball into the box towards Kenny Clark who diverted it into Sheringham. He turned neatly and whipped a shot past Welch for 2-0.

Fleet’s defence did its best to invite St Albans back into the game a few minutes later with a couple of hasty and inadvisable clearances and Steve Wales’ break into the box and cross into Sean Shields should have tested Edwards, but the Dagenham loanee tamely fired the ball at the goalkeeper. Brown’s side could have had more goals in the closing minutes of the first half as first Cook laid a ball off for Bricknell whose shot was blocked in the six-yard box by Welch, then Osborn launched a shot goalwards and finally Cook himself fired inches over on the stroke of half-time.

But that good work was undone in the opening minutes of the second half when Shields’ corner was headed against the bar by John Frendo. It seemed Fleet might escape the let-off, but Wales followed up to knock in the rebound and suddenly the visitors were back in the match. Fleet were momentarily disturbed but they responded well.

Bricknell sidestepped his marker outside the box and produced a neat turn and shot that floated wide. Sheringham then found himself goalside with only Welch to beat but couldn’t find the target and then an Osborn through ball sent the Fleet No.9 through again and he beat Welch this time only to see the ball roll agonisingly wide of the post.

That was Osborn’s final contribution as he took a knock and was carried off by his teammates, Godden coming on to take a position wide on the right. It signalled a key turning point in the match. St Albans’ own substitution, David Keenleyside for Charlie Gorman, was mired in confusion and the referee booked Keenleyside for entering the field of play without permission. And barely two minutes later, Keenleyside slid into a challenge with Rance and the referee produced a second yellow to reduce St Albans to 10 men.

Fleet capitalised immediately, with Huke firing a low through ball into Bricknell’s path and the Fleet striker’s finish was excellent, a crisp shot past Welch on 69 minutes. Fleet exploited the 10 men with some textbook passing into space and for a while St Albans’ goal led a charmed life. Bricknell’s shot after a goalmouth melee saw Welch beaten but the ball brushed the post and rolled along the line before being cleared. Cook fired over from close range and then a one-two between McMahon and Sheringham saw the Fleet skipper fire over from eight yards.

The pressure on the visitors was immense and it was little surprise Fleet grabbed a fourth on 74 minutes. Godden headed down a free-kick into the box and there was Bricknell again to smash it home past a hapless Welch who has now conceded four goals on each of his last three visits to Stonebridge Road.

Even with the game won, Fleet poured forward and the crowd bayed for five. Godden’s shot across goal was palmed behind by Welch and then another goalmouth scramble saw Cook, Bricknell and Godden all have a bite at the cherry before Sheringham forced the ball over the line only to be denied by a very dubious handball call by the officials. Cook carved out another chance for substitute Matt Johnson before the referee finally ended the torment for the visitors.

That was just the sort of performance the Fleet needed to respond to their critics after recent games – and though the visitors might feel hard done by with the sending-off, they struggled to live with the home side’s attacking intent all afternoon.

Ed Miller has been Ebbsfleet United's communications manager and programme editor since 2014 and responsible for the club website since 2007. Contact him on ed.miller@eufc.co.uk
PrevPreviousFleet strive to stop Saints’ march
NextWeston-super-Mare 3-2 FleetNext