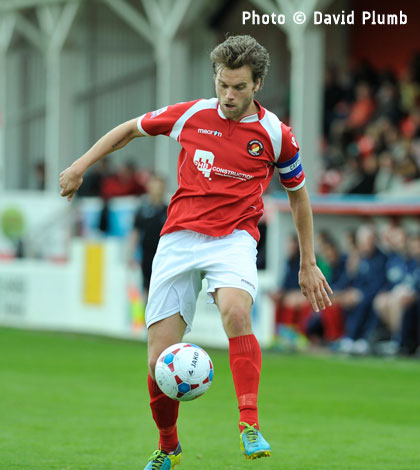 A much-changed Fleet side cantered to an entertaining 4-0 win over relegated Dorchester Town this afternoon to confirm a play-off semi-final against Bromley.

A first-half brace from Daryl McMahon set Fleet up nicely, and goals one after the other in the second half from Michael Thalassitis and Alex Osborn put the seal on a fine display that could have seen the goal margin rise even higher.

Steve Brown rang the changes, bringing in Brandon Hall, Chris Sessegnon, Shane Huke, Paul Lorraine, Stacy Long and Michael Thalassitis and it was a breath of fresh air in a relaxed Stonebridge Road as the team put on a show for the 1,670-strong crowd.

Dorchester, long since relegated, didn’t look overawed in the early exchanges and it took 10 minutes for Fleet to open them up, Anthony Cook’s cross from the left spilled by goalkeeper Alan Walker-Harris but it trickled out of reach of the incoming Billy Bricknell.

The home side were playing some nice football and with Long’s neat interchanges and McMahon driving the midfield, Dorchester were soon on the back foot. McMahon sent in a corner on 12 minutes that Huke knocked down for Long but he drove his shot over the bar.

That was just a warm-up for the goal that was to come, a result of more good build-up play. Long started the move, Bricknell turned and played McMahon through on goal and the hero of Thursday night drove towards the six-yard box and planted a fine shot beyond Walker-Harris and into the roof of the net.

On 26 minutes Sessegnon stormed down the right and a decent cross filtered through to Bricknell inside the penalty area. He beat one defender, but another managed to cover and block the shot as it flew towards its target. At the other end, Hall was hardly busy but he had to tip Sam Lanahan’s effort over the bar as Dorchester made a rare foray forward before Fleet came back with a vengeance.

On 37 minutes, Cook floated what looked like a casual free-kick to Walker-Harris’ far post and it clipped the corner of the upright and bounced behind. The woodwork saved Dorchester only briefly as McMahon scored his third in two games four minutes later. Again it was fine passing football, started by Sessegnon, who found Bricknell and he diverted into Long’s path. His pass found McMahon and the Fleet skipper let fly with a shot for 2-0.

It could have been 3-0 just before the half-time whistle when Alex Osborn opened up the defence and set Bricknell up but he snatched at the chance and was off target from 10 yards.

Osborn and Bricknell could have ripped Dorchester apart in the second half such was the glut of chances both were involved in. The first came on 55 minutes, Long found Osborn out wide in space and his ball into Bricknell was smacked against the bar. Osborn, who had a superb second half, then found Cook and he made the keeper work with a shot that almost reached Bricknell as it bounced out but it wasn’t the Fleet striker’s day and he watched it slip away.

Fleet were creating chance after chance by now. Osborn blazed a McMahon pass over the bar, Bricknell drove a shot at the goalkeeper and then Osborn combined with Bricknell again who went for a sidefoot instead of power but saw that effort cleared off the line.

But Dorchester couldn’t keep the Fleet out forever and it was 3-0 on 70 minutes. McMahon was the architect, teeing up Thalassitis who didn’t connect well with the ball, but it was enough to beat the goalkeeper. That was Thalassitis’ final contributon as he made way for Ben May, and within seconds, Fleet extended the lead to 4-0. This time Bricknell turned provider for Osborn who ran through and tucked a shot beneath Shane Murphy, whose first touch was to pick the ball out of the net having come on for Walker-Harris a minute before.

That was it for chances, though Joe Howe sent a good shot over the bar late on, and Fleet coasted to their final three points of 2013-14. Whether any of the fringe players will have played themselves into contention for Wednesday night remains to be seen, but they signed off the league season in fine style and gave the home fans every confidence that the forthcoming semi-final against Bromley is eminently winnable. And anyone who was there today will have left wanting more – starting what will hopefully be the first of four big games for the Fleet in the next two weeks.

Ed Miller has been Ebbsfleet United's communications manager and programme editor since 2014 and responsible for the club website since 2007. Contact him on ed.miller@eufc.co.uk
PrevPreviousBrown hails Fleet character
NextVice chairman issues clarion call ahead of crunch matchesNext