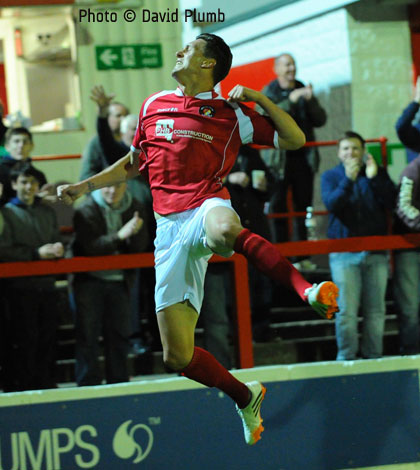 Some fans believed they’d seen the best display of the season last Saturday. Some would have settled for half the 4-0 scoreline tonight. Few would have dared dream their side would repeat the result and better the performance in the first leg of a play-off semi-final.

But Fleet did that and more, racing into a 2-0 lead inside eight minutes and seeing their opponents reduced to 10 men for a handball on the line. And when the third goal went in midway through the second half, there was no stopping Steve Brown’s side who went on to take a huge step towards a May 10 play-off final.

There were few surprises in Brown’s chosen starting line-up, with Ben May and Billy Bricknell getting the nod ahead of Michael Thalassitis. And that appeared to be an inspired choice by the Fleet boss as his front pairing each struck in a dramatic opening period.

There was barely a minute on the clock when Daryl McMahon’s low corner from the right skipped into the Bromley six-yard box. Dean Rance failed to get a touch as it passed through the covering players on the line but May was on hand to stab it home to give Fleet an early lead.

A good start became a great one six minutes later from another McMahon corner. Again Bromley failed to deal with it and goalkeeper Joe Welch pushed a header against the bar. The ball continued to ping around the Bromley area as three times a Fleet head seemed destined to send the ball over the line until a Bromley hand on the goalline produced a penalty.

The referee had little option but to send the culprit off (he deemed it to be Ashley Nicholls, though the Bromley man looked a little surprised at being singled out) and Bricknell kept his cool to drive the spot kick home to give his side a dream start.

Down to 10 men, and off to an awful start, Bromley collected themselves and didn’t crumble. Indeed they set Fleet on the back foot for a spell, though Anthony Cook twice got forward only to send shots wide of the Welch’s goal. The visitors had their own shout for a penalty on the half-hour mark when a shot struck Osei Sankofa’s midriff and Sankofa was the saviour minutes later when Brendan Kiernan ran onto a Pierre Joseph-Dubois ball over the top.

Kiernan again saw another chance go begging as he beat the offside trap and lobbed Preston Edwards but the ball settled on the roof of the net, before Anthony Acheampong made an excellent challenge on Dubois as he shaped up in the box.

Bromley were good value for 10 men but Fleet finished the half strongly, with May forcing Welch into a save from a decent McMahon delivery. McMahon then flashed a low cross along the six-yard box but had nobody in support while Rob Swaine denied Bricknell with a vital block.

The visitors continued to press in the second half, sensing that anything less than a 2-0 defeat would be a victory of sorts under the circumstances. Bricknell was inches away from capitalising on a poor Joe Anderson clearance, while at the other end a low, hard Jay May shot was driven just past the base of the post.

The pressure was starting to build on the Fleet, though Bromley’s possession had little end result, and the home side reignited their game with a classic counterattack goal on 60 minutes. Rance broke in midfield, played the ball out right to McMahon and he slipped a delightful pass through the middle and into the box for Osborn. His shot was diverted into Howe’s path and the Fleet full back tucked away a cool shot beneath Welch for a third goal that sent Stonebridge Road into raptures.

Fleet then turned on the style. Cook ran three-quarters of the length of the pitch to fire an effort just over and then he turned creator for May, who was thwarted by Swaine. With Stacy Long’s introduction on 70 minutes, Fleet’s midfield became even more stylish, with the substitute playing balls off for McMahon to surge into the spaces.

Bromley still had life in them, however, and Edwards was forced to stretch to push away a Dubois effort that looked certain to reduce the arrears before Goldberg shot high over the bar after getting round Aiden Palmer.

Fleet were in no mood to settle for 3-0 while they had a man advantage, however, and McMahon scored his side’s fourth on 80 minutes. The skipper zipped past two defenders on the byline and sent a low shot along the line, past Welch’s covering leg and into the back of the net.

With the home crowd bouncing, Edwards was still pressed into action, superbly pushing away a Dubois shot as he refused to relinquish an eight-game run of clean sheets at home – and against the league’s top scorers.

The final whistle signalled the end of a dreadful first tie for Bromley but Fleet go to Hayes Lane knowing they must give nothing away despite a lead any team would kill for over two legs.

Ed Miller has been Ebbsfleet United's communications manager and programme editor since 2014 and responsible for the club website since 2007. Contact him on ed.miller@eufc.co.uk
PrevPreviousMatch preview: one last push on the home front
NextLast chance for advance KSC ticketsNext