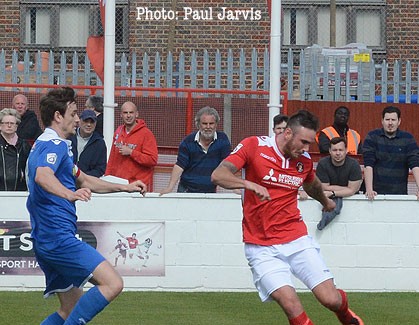 Daryl McMahon will soon be rivalling former chairman Lionel Ball for the record as caretaker manager as he remained undefeated to record his third win in four matches as interim boss.

And he did it in some style as Fleet turned in a performance as good as any this season to equal their best league result of 2014/15 (which also came under McMahon).

Four goals and an attacking display of some measure were a fine way for the Liam Daish Stand to end its life as supporters gathered under its roof one last time.

McMahon handed Michael West his first start of the season in place of Danny Kedwell, while Sean Shields replaced Luke Rooney. Fleet weren’t on their game at first, with the visitors really going all guns blazing in the opening five minutes, but a sign of what was to come saw West break, play a ball wide to Shields who returned the favour for West to fire into the side netting.

The pace of the game was certainly a sharp contrast to the previous week’s tedious affair at St Albans and both sides seemed to have forgotten their imminent summer holidays as the ball zipped around the pitch.

The visitors could have gone ahead on 15 minutes when Ricky Hayles’ free-kick was floated into the six-yard box and Scott Sellears got between his markers to clip a volley inches over the crossbar. At the other end, Tom Bonner seized on a loose ball from a free-kick to poke it past goalkeeper Jake Larkins but he was offside.

Fleet didn’t have to wait too long, however. West’s corner was turned into Matt Johnson’s path by Stuart Lewis and his shot deflected off a defender to find its way past Larkins, with Johnson barely celebrating against his former club.

Adam Cunnington then saw an audacious overhead kick in the six-yard box go wide, but he managed to connect with Joe Tabiri as well, to leave the Stortford man flailing on his own goalline.

Fleet were really firing on all cylinders and a multiple passing movement from back to front saw West’s effort only denied by Adam Bailey-Dennis sliding in and in the process being fortunate not to send the ball over his own line. Shields was having a fine game and he was set free by Cunnington, twisting away from two defenders and seeing his shot blocked inside the box.

Stortford weren’t far off an equaliser on 38 minutes when Sellears was given far too much space to advance and his cross-shot was diverted by Brandon Hall into Greg Pearson’s path. The former Burton man got his shot on target but Acheampong blocked it on the line.

And the visitors were punished two minutes later when yet another decent Fleet move saw Lewis pick out Matt Godden by the far post. He sent the ball back across goal and Cunnington fired home.

The second half was barely a minute old when Fleet made it 3-0. They robbed the visitors straight from the kick-off and Matt Fish picked out Aiden Palmer. He advanced into space, delivered a short ball into Lewis who, despite having Shields screaming for a pass out wide, instead took a step and unleashed a superb shot over Larkins from distance.

Fleet kept coming. Johnson’s corner arrowed towards the underside of the bar and was palmed clear by Larkins before Cunnington made it 4-0 on 54 minutes. Johnson again floated a ball over the top and Cunnington was just onside but took several glances at the linesman before deciding to continue and he took the ball around Larkins with aplomb and smashed it home.

A couple of substitutions probably stemmed the Fleet flow and the visitors enjoyed a spell on top though another great Fleet move on 66 minutes could have been 5-0 when Stuart Lewis, having one of his best games in a Fleet shirt, expertly sent substitute Kedwell behind the defence and his cross was powered into the goalkeeper’s arms by the head of Godden.

Shields typified his performance by starting and finishing a move as Fleet toiled for a fifth but it wasn’t to be. A tumultuous season ended on a high and if this performance was indicative of anything, then 2015/16 will surely be better.

Ed Miller has been Ebbsfleet United's communications manager and programme editor since 2014 and responsible for the club website since 2007. Contact him on ed.miller@eufc.co.uk
PrevPreviousStanding down
Next‘Stability is key’, says new bossNext