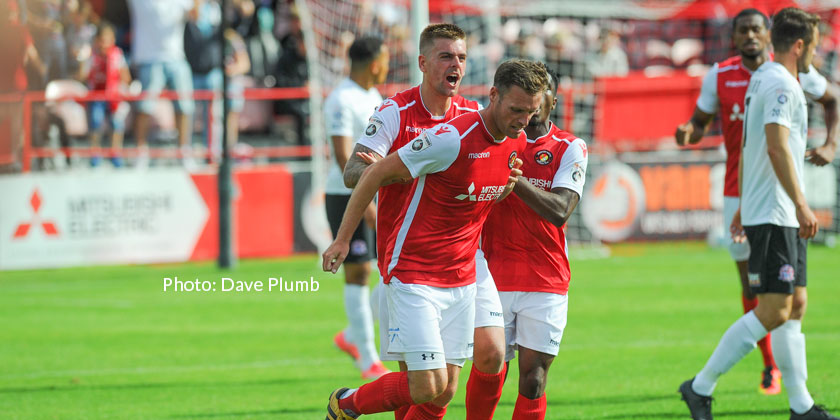 With Fleet’s unbeaten 2017 record hanging by the most slender of threads, Andy Drury slotted home in the final minute to preserve that particular run and clinch a well-deserved point for Daryl McMahon’s side. It was the third time this season AFC Fylde had let a lead slip but the Coasters roared into a two-goal lead and Fleet had to dig very deep to respond.

With Dave Winfield ruled out until at least Christmas, McMahon was forced to reshuffle his pack and he made two changes, Darren McQueen making way, while Marvin McCoy and Jack Connors came in as Fleet went to a flat back four.

The opening spell was unremarkable, though the visitors were purposeful in attack and gradually forced the Fleet defence into retreat, with Jack Muldoon, Jonny Smith and Henry Jones in particular causing plenty of problems.

On eight minutes Smith broke at speed with Fleet all at sea but he managed to waste that chance. But it was Jones who drew first blood moments later, the nippy attacking midfielder livelier to a ball 25 yards out and he wriggled his way past Jack Payne, evading the Fleet defence to tuck a clinical shot away from Ashmore for 1-0.

Fleet offered little in response, with Luke Coulson’s inviting cross meeting no-one to attack it while Jack Powell sent a low shot into the side netting. And Fleet paid a further price for some lax defending on 16 minutes: a Muldoon ball threaded through to hotshot striker Danny Rowe on the right was gobbled up by the No.9 who eased into space  and picked a spot low in the far corner past the Fleet keeper.

Fylde looked likely to add to their two-goal lead such was the verve with which they attacked a rocky Fleet back line and Powell executed an excellent tackle in the box during one melee as the home side managed to scramble the ball away.

It was something of a relief to home fans therefore when their side found a quickfire lifeline. Myles Weston slung over a deep cross on 19 minutes to the far post from the right and Kenny Clark got up well to direct a header over Rhys Taylor high into the net.

That perked the Fleet up and Drury found some space in midfield to dictate things for a spell, while Powell found the back of the net but was disappointed to see a flag raised against him.

Fleet weren’t shut out for much longer, however. Powell floated a 29th minute free kick to the back post and Drury’s header into the six-yard box landed nicely for Kedwell who swiped home the equaliser.

There was little time for celebration, however, as Fylde came storming back. Another defensive mix-up saw Rowe pounce with a shot that Ashmore saved and Jones smashed the rebound off the crossbar with the keeper down and the goal at his mercy.

Clark had to perform emergency surgery on 33 minutes after giving the ball away and he responded superbly to deny Muldoon as he raced through on goal. But from the resulting corner, in a manner reminiscent of Guiseley’s opening goal the previous week, the ball was played out to Sam Finley lurking in space on the edge of the box and he powered home a clinical drive to restore Fylde’s lead.

Rowe then beat the offside trap despite howls for a flag from the home fans and it would surely have been 4-2 but Muldoon misdirected his header just wide.

But Fleet’s second-half performances in recent times have been stirring stuff and they set about their task in the second 45 minutes with determination. McQueen replaced Powell after the break and his side seized the initiative. Jack Payne saw a shot through a crowded box saved by Taylor and Weston ran 35 yards down the right wing to cross but it bounced awkwardly for Coulson who lifted it wide.

McQueen got sight of goal on 55 minutes when a clever Kedwell header set him free but he had a lot of ground to make up and Taylor was able to save at his feet inside the box.

It was largely all Fleet and Coulson was denied after a decent run inside the box while McQueen robbed Josh Langley and was again halted in his tracks by the goalkeeper.

Fylde were far less adventurous in the second half but they still had the odd moment in attack that worried the Fleet, with Jones skimming a shot across goal and Rowe on two occasions showing good feet to bamboozle the home defence but his final ball was lacking.

Sam Magri twice had headers that weren’t far off, his second on 83 minutes from a cross by substitute Sean Shields travelling mere inches over the crossbar.

Fylde succeeded in winding the clock down to frustrate the Fleet who threw Mills into the fray with four minutes left. But it was another of McMahon’s subs who came up trumps with the seconds ticking away. On the left, Shields managed to turn Josh Ezewele to lift a ball into the box that ended up with Drury. It looked like the midfielder might have lost his chance when he took a touch, but he turned inside Langley and fired home to the delight of the home contingent.

Fylde forced a corner in time added on but Finley slung a shot high over the bar to signal that a point apiece was going to be the order of the day. Fleet now travel to Dagenham & Redbridge where they will need to show as much resilience against John Still’s title hopefuls.

Ed Miller has been Ebbsfleet United's communications manager and programme editor since 2014 and responsible for the club website since 2007. Contact him on ed.miller@eufc.co.uk
PrevPreviousNew season, new League… new Vivaro!
NextMcMahon happy with a spirited pointNext