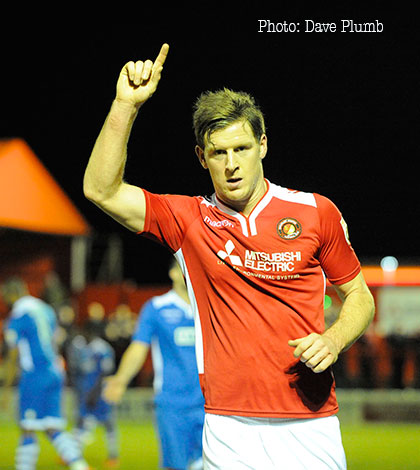 Adam Cunnington made it six goals in four games as his brace helped Fleet to only their second league win at Stonebridge Road since September. But Staines Town pushed Fleet close with an industrious performance that kept the result in doubt to the final whistle.

Jamie Day made three changes, with Kenny Clark and Ben Jefford dropped to the bench, replaced by Tom Bonner and Sean Shields, while Dean Pooley started ahead of the injured Anthony Acheampong.

And Fleet got off to their third perfect start in as many weeks with Adam Cunnington finding the back of the net inside a few minutes as he did at Braintree and Gosport. Inside three minutes, Shields got round the back of the Staines defence, delivering a cross from the left that was only half-cleared, falling to Cunnington who rifled it home for the opening goal.

Staines weren’t far off an equaliser almost immediately when former Bromley striker Elliott Buchanan was allowed space to drive a shot in from close range but it deflected behind for a corner.

Not that the visitors were denied for long as on six minutes Tommy Brewer teed up a cross and new signing Jake Kempton was given too much space to direct a header past Preston Edwards for 1-1.

The visitors took any opportunity to get forward and the tall Stephane Ngamvoulou for a while had the freedom of the right flank to unsettle the Fleet defence.

But the home side still had the best of the chances and goalkeeper Jack Turner punched out a Danny Kedwell header before Theo Lewis saw a decent shot parried towards Matt Fish, who could only direct it wide. Shields was Fleet’s best outlet and he gave Eri Felix a torrid time, turning the defender to supply Stuart Lewis but his turn and shot lacked the power to trouble Turner.

At the other end, Fish got embroiled in a mix-up attempting to clear his lines and Buchanan took advantage, playing a low cross that Fleet had to scramble behind for a corner.

On 28 minutes, however, Fleet got the breakthrough they needed. Matt Johnson’s measured pass split the Staines defence and as Turner raced out somewhat too late to collect, Theo Lewis bolted in, rounded the goalkeeper and casually struck the ball home for 2-1.

Turner came to the rescue of Staines twice more, first from a Shields cross from the byline that he palmed away and then to deny Theo Lewis once more from 10 yards out. Buchanan almost responded with an equaliser as he made the most of another defensive mix-up in the Fleet back line to beat Edwards but he was offside.

Fleet punished Staines for that on 38 minutes when Shields once again provided the assist, crossing into Cunnington’s line of fire and the Fleet hotshot duly obliged, tucking away the chance to give his side what looked to be an unassailable lead. Certainly it galvanised the men in red and they began to spray passes around with an air of nonchalance.

The second half lacked much of the incident of the first and though Staines carved out a couple of half chances early on, Fleet looked to be home and dry and largely in control of the game. Their best chance of the second period saw Turner misjudge a routine catch and race off his line and outside his box but as Fleet robbed the ball from him, they didn’t manage to trouble the goal.

Staines, however, got a lifeline in bizarre fashion on 68 minutes. A routine back-pass to Edwards should have been launched upfield by the Fleet keeper but as he went to kick it, he swung his leg over the ball, completely missing it and it rolled apologetically over the line.

The mistake unsettled the home side and they allowed Staines to dictate play for a time but eventually the Fleet dug themselves out of their stupour and finished the game on the front foot. They really should have done better when an excellent build-up involving Mark Gower and Stuart Lewis saw Jefford released down the left. His run was good but he overhit his cross towards the far corner flag meaning Fleet had to settle for just the three goals. That was encouragement enough, but it was the two Staines scored that will mean more is required in the coming weeks if the play-off places are to be reached.

Ed Miller has been Ebbsfleet United's communications manager and programme editor since 2014 and responsible for the club website since 2007. Contact him on ed.miller@eufc.co.uk
PrevPreviousMitsubishi maintain backing
NextCommunity Day to play host to bumper crowdNext