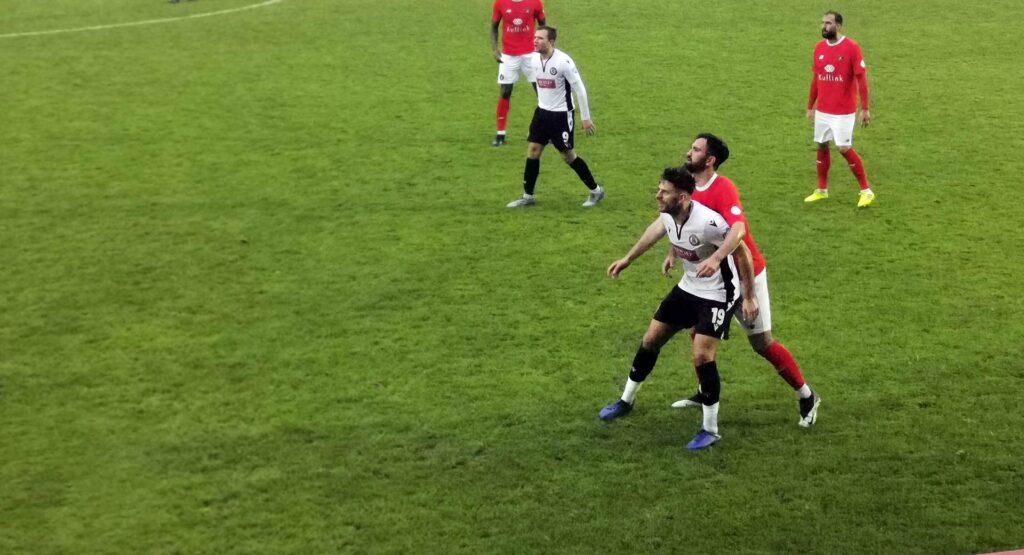 Roll out the clichés – a week’s a long time in football et cetera, et cetera. From a 3-2 defeat to a 3-2 win, Fleet turned up the drama dial, turned the scoreline on its head, came from behind, won with a sublimely worked goal… and did it all with 10 men for 45 minutes!

With Hungerford Town proudly sitting top of the table as they led 2-1 against those 10 men with an hour of this game gone, it required all the energy and belief the Fleet could summon to wrestle the result back… but that they did with Lee Martin equalising and then assisting Bobby-Joe Taylor’s fine winner.

Martin was one of three changes to Dennis Kutrieb’s team as both he and Tobi Adebayo-Rowling recovered from their respective ailments to join Jordan Holmes back in the eleven.

But the three barely had time to get accustomed to the game before Hungerford sprung into action and grabbed an early lead. The fixture was only two minutes old when Callum Willmoth’s free-kick to the far post was met by Mike Jones. His initial shot hit the base of the post but bounced straight back out to him and he was able to fire past Holmes.

Perhaps mindful of having chased the game against Chippenham in similar circumstances, Fleet were in no mood to be patient in finding a response. And the home side were back on level terms just five minutes later.

Sefa Kahraman’s ball upfield was turned into Reece Grant’s path by Rakish Bingham and in many ways a reworking of his goal at St Albans last week, Grant held off his marker to shoot beneath the goalkeeper for 1-1.

Having fought their way back into the game, Fleet carved out a host of chances as they kept Hungerford penned largely in their own half for long spells.

Taylor had an effort saved by Luke Cairney and Bingham whipped an effort over the goalkeeper but the bar too from 12 yards.

On 22 minutes, Taylor then drove past four men from inside his own half all the way to the Hungerford box only for Keith Emmerson to send his shot behind for a corner. From that Josh Payne’s set piece bounced off the top of the crossbar.

An excellent counterattack on 32 minutes released Bingham to cross low into the box were Adam Mekki got a touch but was unable to turn it home.

Mekki had an even better chance to score moments later when Taylor’s firmly hit shot was only parried by Cairney. It bounced up for Mekki eight yards out but he had mere seconds to take it in mid-air and hit it wide with a left-foot volley.

Still the Fleet pressed. Bingham charged down a tackle on the half hour to play Grant through on goal but Cairney gathered that and then Lee Martin found a ball into Mekki running from the left wing but he was impeded in the box.

There was no let up and Taylor’s next intervention was a lightly delivered cross that Grant helped on to the post, the ball bouncing back into Cairney’s grateful arms.

Hungerford needed to take the sting out of the game and they did it with another goal, against the run of play. It came on 36 minutes, Fleet switching off in defence as Taylor’s header was intercepted by Ryan Seager. He slipped an angled pass through to Luke Hopper whose low strike slid away from Holmes’ reach and headed for the bottom corner.

With a little needle creeping into the game on the stroke of half-time, James Rusby’s shoulder barge on Grant earned the Hungerford skipper a yellow card. With Payne preparing to take the free-kick, an altercation in the box saw Hopper fall to ground. After a lengthy exchange with his assistant, the referee produced a red card for Charlie Rowan claiming he’d raised an arm to the Hungerford man’s face.

Facing another battle with 10 men at home, hot on the heels of the Dulwich game, Kutrieb opted to bring Ben Frempah into defence, Mekki making way for the second half.

There were fewer incidents at the outset of the second period with only Martin’s 52nd turn and curling shot over the bar to show for Fleet’s efforts.

Hungerford had a couple of opportunities within minutes of each other just past the hour, with top scorer Seager sending a low shot to Holmes’s far post that the Fleet keeper got a vital touch on to send it for a corner.

On 64 minutes Taylor cut inside and across the edge of the box to drive an effort on target that Cairney pushed away but the Fleet’s patience was rewarded a minute later.

Jack Paxman and Martin exchanged passes from a corner and Paxman laid the ball off to his skipper on the edge of the box whose precise effort escaped the attentions of the Hungerford defence and goalkeeper to fly into the bottom corner.

With almost 25 minutes still to play, the 10 men sensed the game was theirs for the taking. A couple of yellow cards interrupted the flow but with Kahraman driving from defence down the left and Martin marshalling his men to ever greater heights, the only surprise when the third goal came was its sheer quality.

And it arrived 11 minutes from the end. A great flowing move involving Payne to Kahraman reached Taylor on the left wing. He exchanged passes with first Martin and then Bingham in a run across field to the far post.

In the meantime, Bingham’s reverse pass let Martin loose and his cross to the far post was met by Taylor, who had no right to be where he was given where he started the move, and he headed home from 10 yards.

Hungerford pressed in the closing stages as the referee somehow found six minutes of time added on but Fleet were in no mood to let such a hard-earned win slip and it was greeted with huge joy at the final whistle.

Ed Miller has been Ebbsfleet United's communications manager and programme editor since 2014 and responsible for the club website since 2007. Contact him on ed.miller@eufc.co.uk
PrevPreviousPreview: Fleet plan their Hunger strikes
NextReaction: “Who loves a challenge?”Next