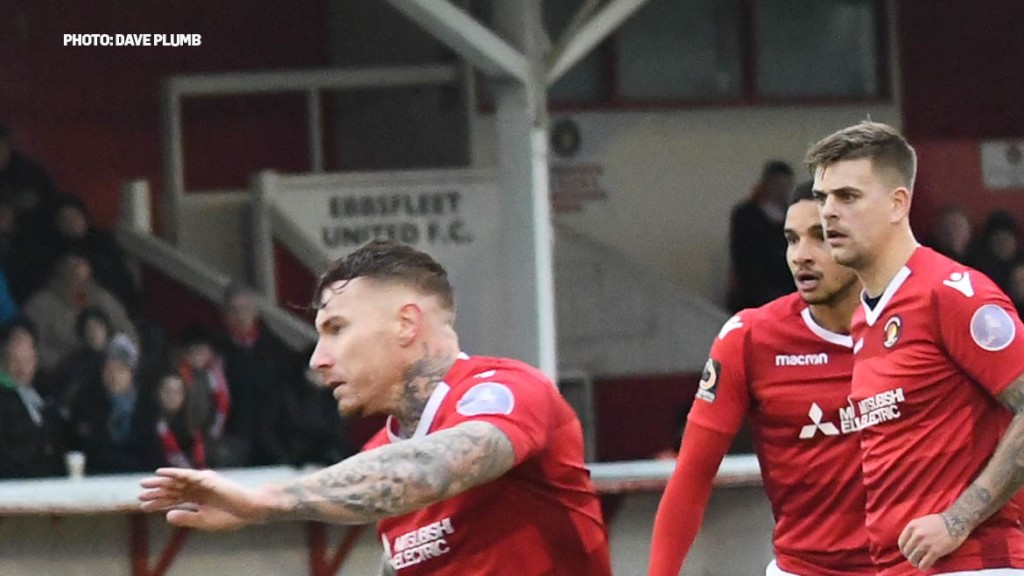 The Fleet record books will be pored over tonight to discover the last time three defenders found the back of the net as Jack King, Sam Magri and Chris Bush delivered the platform for Fleet to take the points against Boreham Wood.

Six goals and six points in two games is perfect tonic for Garry Hill after his side’s previous barren spell and though Boreham Wood set up a tense finish as both sides ended the game with 10 men for different reasons, the Fleet prevailed.

For the first time in weeks, Hill was able to name a full set of substitutes and the returning Bush and Dean Rance were straight back into the side, Myles Weston and Corey Whitely making way. Dave Winfield also returned to the squad with a place on the bench.

Wood, on a poor run of just one win in 11 games, named ex-Fleet pair captain Mark Ricketts and Ricky Shakes in their starting lineup.

The home side got off to a slow start as Wood retained possession and didn’t squander it until Fleet found themselves in front with their first attack of the game.

It came on five minutes, a free-kick swung to the left of the box where Gozie Ugwu met it with a shot that came back off the post. Before Boreham Wood could clear, King was on to it like a flash to sweep a low shot into the net.

That lead lasted just five minutes, however. A Wood corner from the left was delivered high into the box and Keiran Murtagh got up well to power a header beyond Nathan Ashmore.

The equaliser didn’t dampen Fleet spirits and Ebou Adams got a run on goal before Lawrie Wilson picked up on the right and sent in a useful cross that was blocked in the box. Ugwu was almost on to a poorly judged David Stephens back header that bounced in space just as the Fleet striker got in behind but he couldn’t quite reach it.

Fleet regained the lead on 22 minutes when Payne’s corner from the left dropped by the far post and Magri got low to send a header squeezing through the six-yard box and in for his first goal for the club in 78 matches.

The defenders were keen to get more and King flashed a good header just wide from Wilson’s delivery. And it was clearly not a day for the strikers as Ugwu was ever so unfortunate not to convert on 27 minutes when he took Ashmore’s upfield ball on the volley from 20 yards with a sweet shot that thundered back off the crossbar.

Weston replaced the injured Bagasan Graham on the half-hour but it didn’t interrupt the flow. Adams, quick and busy in the middle, exchanged passes with Cheek to leave the Wood defence flat-footed but Cheek could only lash it wide with the ball running away from him as he connected.

Boreham Wood upped the ante as half-time approached and Magri had to be decisive to get in between Ashmore and King to hook away a bobbling ball as Justin Shaibu loomed. Magri then headed another cross clear from inside his own box before seeing a yellow card for a bad-tempered tangle with Idris Kanu who took a blow to the head but appeared to make a meal of it in doing so.

It signalled a rather furious climax to the first-half and Kanu’s hopeful tumble in the box led to a frank exchange of views after the whistle, Murtagh being shown a yellow by the referee as the teams departed.

A scrappy start to the second-half mirrored the first but like that opening five minutes, Fleet found the back of the net again. Goalkeeper Ryan Huddart came for a Magri free-kick but completely misjudged it and as the ball bounced, Bush got enough control on it to rifle it into the roof of the net, bouncing on the line and the underside of the bar as it went in.

The lively Weston then supplied Cheek, who tried to flick the ball on to his shooting foot but Tom Champion was covering and came across to deny him. The same two Fleet players then combined just past the hour mark when Weston stood up a cross following a mazy run and Cheek glanced the ball wide at the far post.

Bush smacked a free-kick goalwards that Huddart parried but couldn’t hold and Ugwu was on to it but that one was cleared for a corner.

In a sudden rush of yellow cards, the game’s next talking point came on 66 minutes. As Wilson tried to get away quickly on the halfway line, he was felled by Ricketts who had picked up a first caution only a few minutes before. It was a harsh second yellow but it saw the former Fleet favourite, dismissed only once in his Stonebridge Road career, given his marching orders.

Fleet didn’t really make that one-man advantage count but they hardly needed to as Boreham Wood appeared to be contained. The home side still carved out chances, though, and Weston was unlucky not to score as he worked his way past Stephens with Ugwu and Cheek in space. He tried to poke the ball beyond Jamal Fyfield but it was one man too many.

The battling Adams swept a decent effort just over the bar from 20 yards and then Weston again, seven minutes from the end, used his trickery to get into the box and only for excellent defending by Femi Ilesanmi, it would have been 4-1.

As it was, it went to 3-2 four minutes from time. Dave Winfield, on as a substitute, pulled up in trying to stop Ralston Gabriel and he squared the ball for fellow sub Bradley Ash to slide the ball into an empty net.

The sorry sight of Winfield leaving the pitch again put Fleet down to 10 men, having used all their substitutes, and suddenly Boreham Wood fancied their chances of a point.

The tricky Gabriel caused problems with his direct running and the visitors forced two more corners, Weston having to hack clear in his six-yard box as Gabriel was allowed to get in behind the defence. But Fleet hung on and while they stay 10th in the table, there is some ground made up on Gateshead and Eastleigh.

Ed Miller has been Ebbsfleet United's communications manager and programme editor since 2014 and responsible for the club website since 2007. Contact him on ed.miller@eufc.co.uk
PrevPreviousPREVIEW: Boreham Wood
NextRIP Michael ThalassitisNext