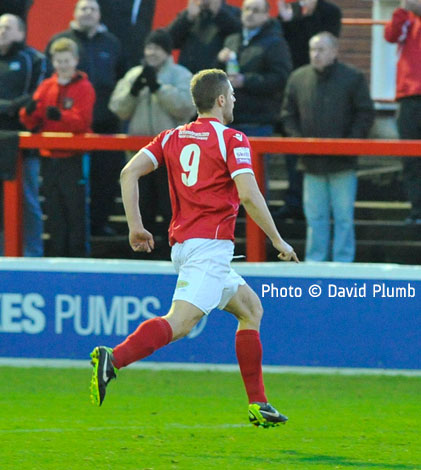 Fleet bagged their second 3-0 win in succession in Skrill South as they despatched Farnborough with relative ease, a convincing second-half display sealing the points.

Steve Brown kept faith with the side that beat Staines, the only change an enforced one with Ben May replacing Michael Thalassitis whose wrist injury had prevented him from training.

After an airing of tongue-in-cheek cheers from the terraces after Preston Edwards passed his own personal 10-second sending-off mark against Farnborough, Fleet got down to business. Alex Osborn had an early sight of goal but shot wide after pressure from Alan Inns but his side weren’t waiting long to go one better.

With six minutes on the clock, Anthony Cook collected a hefty delivery slung across from Joe Howe, dropped a shoulder and managed to find a gap between goalkeeper Kevin Scriven and his near post, the ball flying into the opposite corner off the inside of the woodwork.

The home side enjoyed a decent 20-minute spell and should have been 2-0 up when Osei Sankofa powered a header off target from Daryl McMahon’s cross on 12 minutes, but he was well-placed and could likely have done better.

Osborn was full of energy and was pulled back several times by Inns and Luis Morrison-Derbyshire. He wasn’t far away when a McMahon cross to Anthony Acheampong dropped kindly to him on the edge of the box and he volleyed an effort that Scriven had covered in the centre of his goal and he parried it over the bar. And Scriven was grateful to see another Osborn shot disturb the side netting after Cook crafted a delivery.

Farnborough were penned back but when they did break, they looked dangerous and were denied an equaliser on 26 minutes. Steve Laidler broke swiftly and charged upfield before picking out Jamal Lowe. He skipped round Edwards and tapped the ball goalwards but reckoned without Acheampong who, with the help of the post, managed to hook the ball to safety.

That let-off didn’t cajole the Fleet into action and Farnborough suddenly fancied their chances. Lowe and Philip Page found space easier to come by and Edwards had to push away one Page cross while Sankofa was booked for barring Laidler’s progress as he threatened to burst through the middle.

But that was as much encouragement as Fleet gave their visitors and they reasserted their dominance two minutes into the second-half. Bricknell won a corner after his effort on target was blocked by a Farnborough leg. McMahon whipped in a corner and the impressive Rance dived low in his usual full-blooded style to head the ball past Scriven for 2-0.

Bricknell was unfortunate not to extend the lead when he sidestepped the attentions of Inns eight yards out but couldn’t quite connect with a shot that could trouble Scriven. And he was at it again when a Rance pass fell to the Fleet top scorer but the shot was rather weak. And another great move deserved a goal when the energetic Howe broke forward, exchanged passes with McMahon to feed Osborn but the young No.7 placed his shot low and Scriven saw it out for a corner.

Farnborough seemed a spent force by this stage and Brown was confident enough to shuffle his pack, Bricknell making way for Michael West with 15 minutes left. And West had quite an impact within five minutes, getting behind Boro’s Adam Doyle and planting a low pass along the six-yard box where May had the simplest of tasks to tap it over the line to give Fleet a 3-0 lead.

May almost returned the favour minutes later, his passing letting West spring the offside trap and try his luck with a lob that was just off target. May then supplied Cook with another pass, allowing the Fleet wide man to sprint beyond Josh Moggins. He seemed certain to add to his tally but blazed over the bar. Chris Sessegnon, who replaced Cook seconds later, twice had chances from right wing as he turned Doyle, the second one a lovely move that just lacked composure on the shot.

It hardly mattered though, as Fleet cruised home to stay locked with Sutton United in the play-off zone, the two teams with an almost identical playing record.

Ed Miller has been Ebbsfleet United's communications manager and programme editor since 2014 and responsible for the club website since 2007. Contact him on ed.miller@eufc.co.uk
PrevPreviousMeet the management in March
NextRance’s recipe for successNext