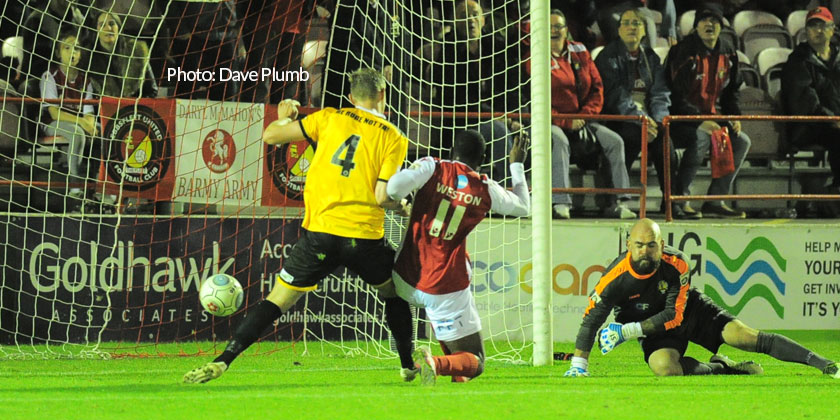 Daryl McMahon may have missed out on a meeting with Sir Alex Ferguson 10 days ago at Macclesfield but he’ll be shaking hands with Fergie Jr who will bring his Doncaster Rovers side to the Kuflink Stadium in just under three weeks’ time. It will be the first time Fleet have played a First Round tie at home since 1995’s win over Colchester United, other than the replayed game v AFC Wimbledon in 2010.

McMahon made two changes to his starting lineup, with Anthony Cook and Myles Weston making way for Andy Drury and Danny Mills, while the visitors were unchanged. And it was they who started off quickly, almost forcing a goal in the opening minute when they cut through the Fleet rearguard and Lewis Smith sent a dangerous shot skidding across the surface and past Nathan Ashmore’s far post.

Fleet soon settled into a passing rhythm after a fairly pedestrian first 10 minutes, with Sean Shields looking the most threatening, a mazy run through the centre of midfield by him unfortunate not to reap greater reward. Shields was heavily involved in the first 15 minutes, finding Mills with a cross from the left before testing the goalkeeper with another looping effort from the right.

Kenny Clark’s header brushed the woodwork from a corner and Fleet enjoyed the bulk of possession, playing some neat, one-touch football on approach though East Thurrock had it largely contained in midfield. Danny Kedwell headed just over and Jack Powell drove a low shot wide as Fleet failed to trouble goalkeeper Lukas Lidakevicius.

Fleet’s best chance came just past the half-hour mark when Powell’s corner fell for Kedwell whose half-turn sent a low shot arrowing into the bottom corner only for the heroics of Ryan Sammons in blocking it on the line.

East Thurrock played their way back into the game in the last eight minutes of the half and Sam Higgins went sprawling under a Clark challenge in the box but his slide was more theatrical than actual and the referee waved play on. The visitors continued to threaten, however, and Smith was next to demand a penalty when he was wrestled to the ground by Magri on the right of the box. Winger Montel Agyemang then sped clear on the break and cut inside to deliver a deceptive shot that Ashmore, who had already committed to the dive, managed to grab hold of after quickly readjusting his position. 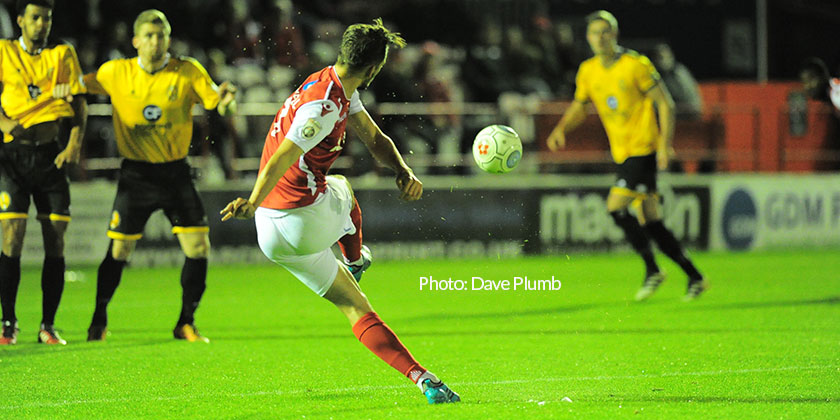 Like the first half, the second took a little while to warm up. Mills was pushed to the ground by George Allen and the resulting free-kick was prime Powell territory but he struck it inches wide of the foot of the post. Drury and Kedwell carved out another opportunity with the latter’s cross reaching Mills at the back post but he was stretching and unable to keep his header down.

At the other end, the Rocks were unfortunate to see their best chance go begging as Reece Harris’ quick free-kick bounced off the post and with Ashmore stranded it ricocheted too high for Higgins to convert.

It was a costly miss for East Thurrock as Fleet finally broke the deadlock with their next attack. A corner landed at the feet of Drury and he struck first time to aim a ball away from Lidakevicius that had too much on it to be stopped by a defender’s as it crossed the line. With that, confidence coursed through the home side and they had the visitors on the back foot.

Just three minutes later it was 2-0. Magri’s advance down the right set Shields free just in front of him and the Fleet winger reversed his direction to send a cross into the middle where substitute Aaron McLean, who had come on just before Drury’s goal, repeated the trick and finished with a clinical header from eight yards.

Two goals to the good, Fleet looked comfortable for the remaining half an hour and the deflated visitors could find no response. Substitute Luke Coulson almost fashioned a third goal when he counterattacked the length of the pitch with only the unlikely form of Bush sprinting up alongside him. Coulson hit the target and Bush slid in to try to force it over the line but was denied by Allen.

Bush’s former Chelmsford teammate Max Cornhill almost reduced the arrears two minutes from time with a diving header but it was the Fleet who wrote the final act. Probing away at the East Thurrock defence in time added on, Coulson turned in a low delivery from the right and substitute Weston was on hand to spring into space and steer the ball past the goalkeeper for 3-0.

The last time Fleet won a replay of any description 3-0, they went to Villa Park. It’s a little early to think about that and Doncaster Rovers will more than suffice as our next challenge.

Ed Miller has been Ebbsfleet United's communications manager and programme editor since 2014 and responsible for the club website since 2007. Contact him on ed.miller@eufc.co.uk
PrevPreviousFleet announce stadium sponsorship deal with Kuflink
NextThe Donny game is for the fans, says Fleet bossNext