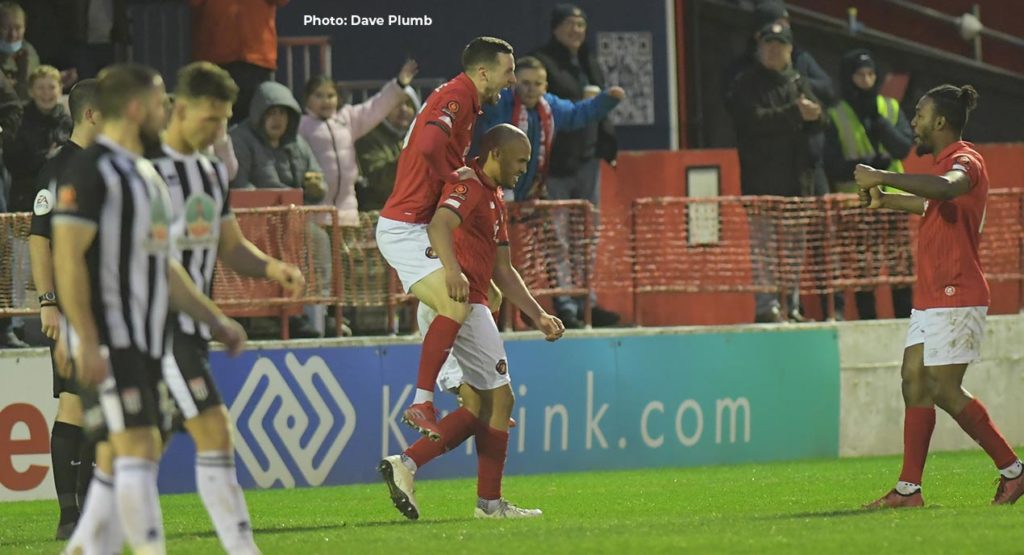 An Elliott Romain brace along with an early second half goal from Dominic Poleon sent Fleet to the top of the table for Christmas, writes Katie Humphris.

Both sides were affected by missing personnel, with subs down to three apiece. As far as the starting eleven was concerned, Fleet made three changes with Jack Paxman, Elliott Romain and Dominic Poleon coming in at the expense of Will Wood, Craig Tanner and Alfie Egan.

There was little action for the opening 20 minutes in a cagey start, Fleet’s most noteworthy moment coming early on when Sefa Kahraman found Paxman dribbling the ball into the area to in turn invite Rakish Bingham, but his effort went over the bar. Bath had a chance of their own a quarter of an hour later, Tom Smith with a close-range effort that was superbly denied by Chris Haigh to protect the clean sheet that he held on to for the full 90 minutes.

The Fleet came close to breaking the deadlock after 20 minutes but a double block from Joe Raynes thwarted that, as he first denied Poleon and seconds later cleared away Bingham’s shot. The away side then broke on the counter to eventually find David Sims-Burgess, whose effort trickled past the post.

Fleet gained increasing control from the half-hour, creating a couple of chances and winning a number of corners, Kahraman firing one over from a Paxman assist, but they were unable to find enough to break down a stubborn Bath City defence. At the other end, Sims-Burgess earned another chance, but his header was only able to find the gloves of Haigh and Bath always looked capable of popping up with a chance or two.

However, the visitors carved out a huge chance five minutes before the break through top scorer Cody Cooke, but once again Haigh was there to keep the ball out of the net after the striker had turned past Chris Solly.

They lived to regret that miss as on the stroke of half-time, as Romain put the Fleet ahead. Bath attempted to clear from their goalmouth after Kahraman had sent in a ball and Romain smacked it home from close range.

If they ended one half in fine style, the Fleet began the next on fire! Goalscorer turned supplier as Romain dug out a pass for Poleon who didn’t need a second invitation to carry the ball around goalkeeper Ryan Clarke and he slotted it home for 2-0 and a 10th goal of the season for his own personal stats.

The Fleet fun didn’t stop there – just a minute later Romain won the duel with the Bath defence and although his initial effort was saved by Clarke, the rebound didn’t elude him and he was able to head it home for an unassailable third goal.

Romain came so close to a deserved hat-trick on 54 minutes, the ever-energetic Ben Chapman driving the ball to the edge of the box and slotting a pass through but Clarke palmed the ball away for a corner. Bath weren’t quite done, however, and minutes later the busy Sims-Burgess fired one from just outside the corner of the box, clipping the edge of the crossbar.

Poleon might have made it four for the Fleet, outpacing the Bath back line to go one on one with Clarke, but on this occasion the keeper won the battle, diverting the effort for a corner. From the resulting corner delivery, Romain got a smart head to it but once again Clarke had a firm hand to it.

Fleet’s dominance on and off the ball made sure they maintained a well-deserved clean sheet, though Bath to their credit kept pushing for an opening that the Fleet defence was in no mood to provide.

Substitute Krasniqi flicked on a corner that was hacked away by Raynes before fellow sub Adam Mekki went down under a Zak Delaney challenge just outside the box that had Fleet supporters politely enquiring about a spot kick before Kahraman rounded off the proceedings with a shot floated just wide of the top corner.

Full-time provided the perfect Christmas present for Fleet fans – their side requiring any win to top the table, but with a three-goal margin, also becoming highest scorers in the division. Dennis Kutrieb will say there’s no prizes for being top at Christmas – but if you have to be somewhere, it’s not a bad place to spend the festive season!

PrevPreviousPreview: Romans on the road in rescheduled showdown
NextInterview: Fleet boss goes into Christmas on topNext