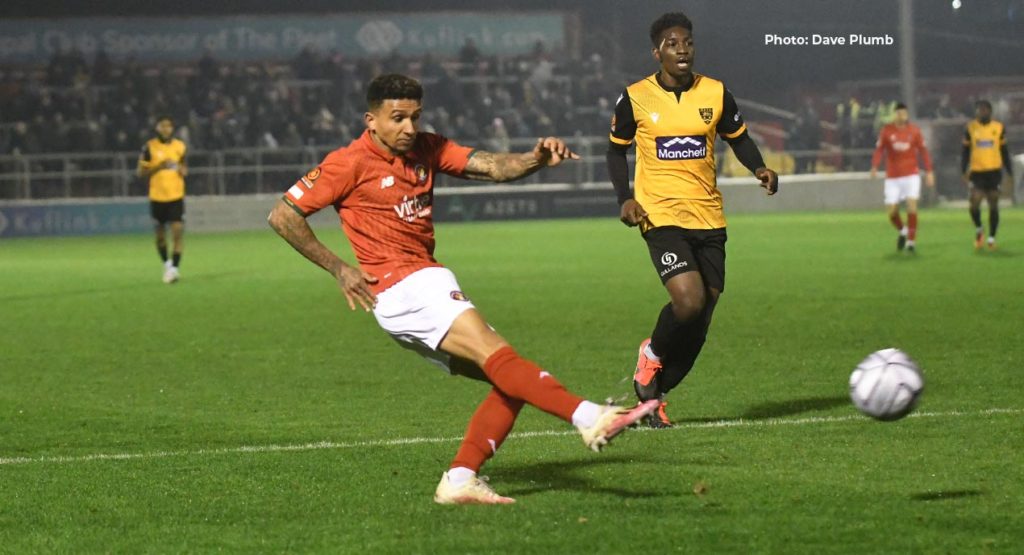 The Fleet’s recent winning streak in the league came to an end tonight as Maidstone United emerged 3-2 victors in the Kent derby at the Kuflink Stadium, writes David Tancred.

Dennis Kutrieb named an unchanged XI for the first time this season as the team that beat Welling United 6-0 on Saturday kept their places, with Jack Paxman and Josh Gould returning to the matchday squad on the bench.

The Fleet took the lead on 10 minutes through Tobi Adebayo-Rowling driving in from the right-hand side before drilling it into the bottom corner in front of the away end, the ball taking a deflection on its path.

It was Adebayo-Rowling’s first goal for the club, having been denied by an offside flag on Saturday, and he had been unfortunate with a shot blocked a few minutes before this one beat former Fleet goalkeeper Tom Hadler.

The Fleet then nearly made it 2-0 as Dominic Poleon tussled with the visiting defenders, forcing a save out Hadler.

But the Fleet proved too generous in defence in allowing Maidstone back into contention and on 13 minutes the Stones were back on level terms. It came via Joan Luque cutting on to his right side and placing it decisively past Chris Haigh.

This eventful period produced more goals before too long and Fleet regained the lead on 17 minutes. Rakish Bingham’s intricate footwork after a great ball by Ben Chapman gave him the chance to hold off the defender and smash it past Hadler to make it 2-1.

But once again, that lead did not last beyond two minutes as back came the Stones a second time, with midfielders Regan Booty and Sam Corne combining, the latter accepting Luque’s pass to drill home a shot for the fourth goal in just nine minutes.

The game and the two sides seemed to pause for breath after that, though chances kept coming. Bingham nearly gave the Fleet the lead once again on 27 minutes after a brilliant turn from Craig Tanner’s pass but his shot clipped the outside of the post. Alfie Egan supplied Greg Cundle for another opportunity that was blocked and Tanner sent a dipping shot just over from 25 yards, while at the other end Haigh wasn’t called upon, the Stones content to absorb what Fleet threw at them.

One final chance arrived right on half-time, Cundle’s cross missed by Egan in the box but bouncing clear to Chris Solly who sent the ball just wide.

Having fought back twice in the first-half after a recent goal drought during their poor run of form, the Stones found themselves able to contain Fleet’s attack-minded players in the second half. Adebayo-Rowling was close to scoring his second of the match on 56 minutes, poking a shot through a crowd that Jerome Binnom-Williams diverted behind.

But the away side made it 3-2 in the 65th minute as Roarie Deacon latched on to a searching ball upfield. He had too much time to encroach into the box and Corne had an equal amount of time to weigh up where he was going to place the ball when it landed for him unmarked at the far post.

Both managers introduced their substitutes and Fleet continued to pile on the pressure but lacked an end product, allowing Maidstone to disrupt and frustrate to good effect, the flow of the game disrupted further still by fouls and poor balls.

The best chances came courtesy of Bingham’s teasing cross from the right that was headed behind for a corner and Adebayo-Rowling once more trying his luck on goal, a good shot tipped over by Hadler. Elliott Romain then headed into Hadler’s arms before the final whistle drew a veil over a frustrating night for the Fleet who resume league action next Tuesday at Oxford City.

Ed Miller has been Ebbsfleet United's communications manager and programme editor since 2014 and responsible for the club website since 2007. Contact him on ed.miller@eufc.co.uk
PrevPreviousPreview: more of the same for second derby game?
Next“We needed a clearer head” says boss on derby defeatNext