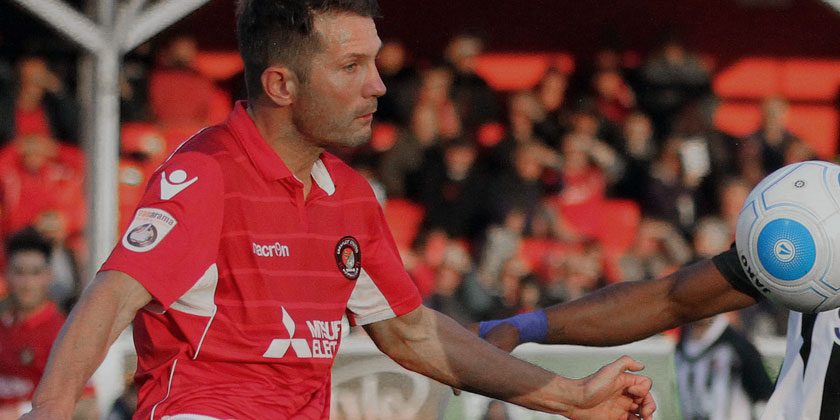 Red cards and late goals made for a great weekend at Welling but that was turned on its head this afternoon as 10-man Maidenhead capitalised on Fleet’s own late red card to take home a hard-earned three points. Fleet managed to keep headline act Dave Tarpey quiet but in so doing saw strike partner Sean Marks complete a hat-trick of headed goals as Maidenhead opened up an 11-point gap over the home side.

Fleet replaced the suspended Dave Winfield with Marvin McCoy as Daryl McMahon kept faith in the 3-5-2 system against the side with the best defensive record in the division. His side started the brighter of the two teams and forced two corners in the opening minutes, though Maidenhead posted warning with a couple of quick counterattacks. Seven minutes in, Danny Kedwell conceded a free-kick from an offside position. The free-kick was floated across and there seemed to be a slip in defence which left a gap that Marks exploited to head past Nathan Ashmore.

Fleet kept plugging away and enjoyed far more of the ball but found the Maidenhead centre-back pairing of Alan Massey and Dean Inman imperious on the edge of their box, blunting each attempt by the home side to force their way through. However, from a Kedwell pass Darren McQueen slipped past Massey on 14 minutes with a show of quick feet and kept his shot on target but goalkeeper Carl Pentney blocked with his legs.

Eight minutes later, another build-up found Anthony Cook in the middle and he landed a smart shot on target but again Pentney kept it out, handing it off to the right to be cleared. Fleet weren’t denied for long. On 23 minutes, a ball from the right found Sean Shields lurking on the left and he showed great technique to take the ball down, brush off Rene Steer and force the ball into the far corner where it just rolled over the line, going in off the bottom of the post.

But Fleet again proved vulnerable to Maidenhead’s crosses from the left and they were undone four minutes after drawing level. Kenny Clark had been forced to clear the ball off the line as panic ensued from an attack down the flanks. The Magpies worked it back into the danger area and Harry Pritchard’s cross was again met by Marks who got real power on a header to put his side ahead.

Shields almost worked an immediate equaliser in similar territory to his earlier goal but pulled his shot wide before Maidenhead ended the half with two long-range efforts by Ryan Upward, the second of them requiring a full-length save from Ashmore.

Fleet struggled to make much headway in the first-half but the second period was a more fluid affair. Sam Deering, strangely off colour in the first half, departed at half-time and Jack Connors formed a flat back four.

Fleet were the better side in the second half and slowly built up more tempo as the game wore on. The visitors picked up three bookings and their robust approach managed to keep the Fleet at bay at first. McQueen made way for Bubb on the hour mark, having just seen a header saved by Pentney in Fleet’s only decent chance of the first 15 minutes.

And a minute later came the pivotal moment of the match. Cook advanced into the Maidenhead half and was subject to a two-footed challenge by James Comley, the intent in the tackle coming after the referee’s whistle and the Maidenhead midfielder was issued with an instant red after a minor scuffle.

That signalled a period of Fleet ascendancy as Shields in particular tried to unpick the Maidenhead rearguard. Immediatey after the sending-off, Powell’s free-kick was hooked back into the box by Kedwell who was standing on the byline and Mark Phillips converted but the goal was disallowed with the assistant referee claiming the ball had gone out of play before Kedwell touched it, a decision that was furiously contested.

On 71 minutes, Cook’s shot was not gathered by Pentney and Bubb was on to in a flash but he rather stood on the ball and Maidenhead got players back. But Bubb wasn’t to be denied – Powell’s inch-perfect ball found him waiting on the edge of the box, he turned smartly and smashed home a shot that had Stonebridge Road in raptures.

Sadly for the Fleet, referee Elliott Kaye and Sean Marks had ideas of spoiling the party. The home side looked the more likely winners after equalising but Kaye pulled out a very soft red card for Phillips on 81 minutes after the Fleet defender cut across his former Braintree teammate Marks. It was a clumsy challenge but it was hardly last-man territory – indeed it was in a more forward position than a foul by Margate goalkeeper Lewis Ward earlier in the season that the same referee thought was only worthy of a yellow card.

It tipped the balance back in the visitors’ favour though Fleet’s concession of a third goal a minute from time was one they really should have cleared. A long throw from the left was knocked on and with defenders standing off, Marks was only too happy to step in and head home what could prove to be a most valuable winner by the season’s end.

Referee Kaye maintained his record of sending off two players in Fleet-Maidenhead fixtures, having done the same back in 2010 and while his contribution turned the game on its head, Fleet will need to conduct a post-mortem about the manner of the goals they conceded.

There’s a chance to put that right on Tuesday night with the visit of Hampton & Richmond Borough, where Phillips will play before his suspension begins next Saturday.

Ed Miller has been Ebbsfleet United's communications manager and programme editor since 2014 and responsible for the club website since 2007. Contact him on ed.miller@eufc.co.uk
PrevPreviousFleet firm up closer links with MVS
NextRed-card and defensive decisions disappoint Fleet bossNext