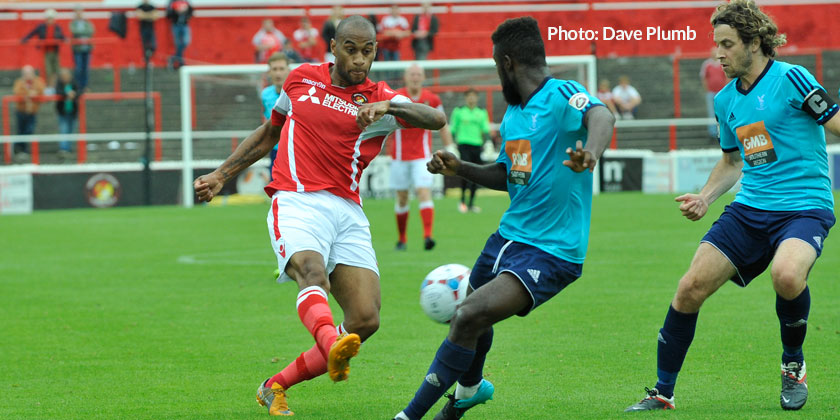 Whatever alchemy Daryl McMahon is performing in the Fleet dressing room at half-time should be bottled. Two goals down after the first 45 minutes, McMahon – as he did at Wealdstone last week – made two brave substitutions, both of which scored the goals that earned their side a point in a breathtaking second half.

Fleet lined up as they had finished the Wealdstone game, with Dean Rance and Stuart Lewis providing the work in midfield to go with the Parkes-Kissock flair.

In a game that promised much given the quality of the players on both sides, the football didn’t disappoint with plenty of one-touch passing from the first whistle. Fleet built slowly from the back with balls into Danny Kedwell played behind the defence for Stuart Lewis to run on to and Lewis twice just failed to connect as he got behind the Hawks back line.

The pace was speedy but chances were few and far between until the 20th minute when Whitehawk earned a rather fortuitous penalty. With the visitors getting increasing space on both flanks, Nick Arnold was released down the Fleet left and got behind Joe Howe who lunged, but seemed to get neither man nor ball. After a discussion with his assistant, the referee awarded the spot kick to the fury of the Fleet players.

Brandon Hall pulled off a superb save from Sam Deering’s penalty but the joy on the Fleet terraces was short-lived. From the resulting corner, Fleet’s defending was ragged and David Ijaha pounced in a goalmouth scramble to turn the ball over the line.

The penalty and resulting goal seemed to rock the home side and Whitehawk took full advantage, taking the game to the Fleet. The men in red struggled to really trouble Whitehawk and the fact that midfielder Lewis was Fleet’s most adventurous player up front summed up the lack of cutting edge the home side possessed.

Juan Cruz Gotta sent a header just over the bar  while at the other end, Kedwell got up to direct a high ball back across goal that a stretching Tom Bonner just couldn’t get enough power on. But then the game almost got away from the Fleet. A corner on 36 minutes from Parkes went astray and Whitehawk produced a break of such quality that it deserved its resulting goal.

Scott Neilson burst up field, exchanged passes with Sergio Torres who sped down the left and spread the ball across the pitch in one fluid movement. It found Deering who still had plenty to do and from 20 yards out he showed great technique to send a shot sailing past Hall.

Fleet looked dejected and beaten at that stage  and had it all to do in the second half… but they responded perfectly.

The introduction of Danny Haynes and Matt Godden for the midfield fulcrum of Parkes and Kissock was a bold move and it paid off. Fleet got at Whitehawk inside the first three minutes with Kedwell’s header forcing Craig Ross into his first save of real note as he tipped the ball over the bar.

Haynes immediately showed his skills, bamboozling one defender and outmuscling a second as he steered the ball into the six-yard box but met a wall of blue shirts. Then a long ball over the Whitehawk defence saw Kedwell burst through and it looked as if the Fleet No.9 was about to lift it over Ross before the keeper got there ahead of him.

On 53 minutes, after taking a while to find his range, Robbie Willmott began to assert himself and a fine cross from the left into Kedwell skipped past him but found Haynes who sent the ball agonisingly high. But two minutes later, Fleet were right back in it. A perfect through pass from Matt Fish, just as Whitehawk were clearing their lines, saw the ball land at Godden’s feet and he struck a quick, low shot from 15 yards that beat Ross to make it 2-1.

With the crowd animated and vociferous, Fleet kept the visitors on the ropes. Ross had to stop Haynes low down at his near post as he – and most of the stadium – expected the winger to cross to Kedwell instead of go for goal before Willmott’s low delivery carved open the defence but Godden couldn’t direct his diving header on target.

Willmott again produced the goods from the left on the hour mark and Kedwell’s header was turned behind by Ross as Whitehawk could barely muster an attack of their own. They reshuffled their pack, bringing on ex-Dartford midfielder Dave Martin and he was booked within minutes for a foul on Willmott.

But the substitutions had the desired effect for Whitehawk as they slowed things down and took the wind out of the Fleet sails after a frenetic period. But still the home side pressed and were much the better side, finally getting their reward 11 minutes from time. Godden supplied a measured ball in from the left and Haynes was well positioned in the middle to convert from close range for his first Fleet goal.

McMahon’s side could really have won it, although in their haste to get the winner, they allowed Whitehawk a little more space and there were a few anxious moments as two shots from substitute Shamir Fenelon flashed wide of Hall’s post.

Cunnington twice had chances, once when Ross dribbled himself into trouble but managed to clear for a corner and then again when he chased a loose ball against the goalkeeper that resulted in a ludicrous yellow card for the Fleet substitute who was surely entitled to challenge for a loose ball.

Godden was through on goal late on as well but Ross stood up well to deny the Fleet after a truly enthralling and exciting 90 minutes of football. Bring on Dartford!

Ed Miller has been Ebbsfleet United's communications manager and programme editor since 2014 and responsible for the club website since 2007. Contact him on ed.miller@eufc.co.uk
PrevPreviousNo Limit Street Band to play at Stones clash
NextBoss delights in second-half showNext