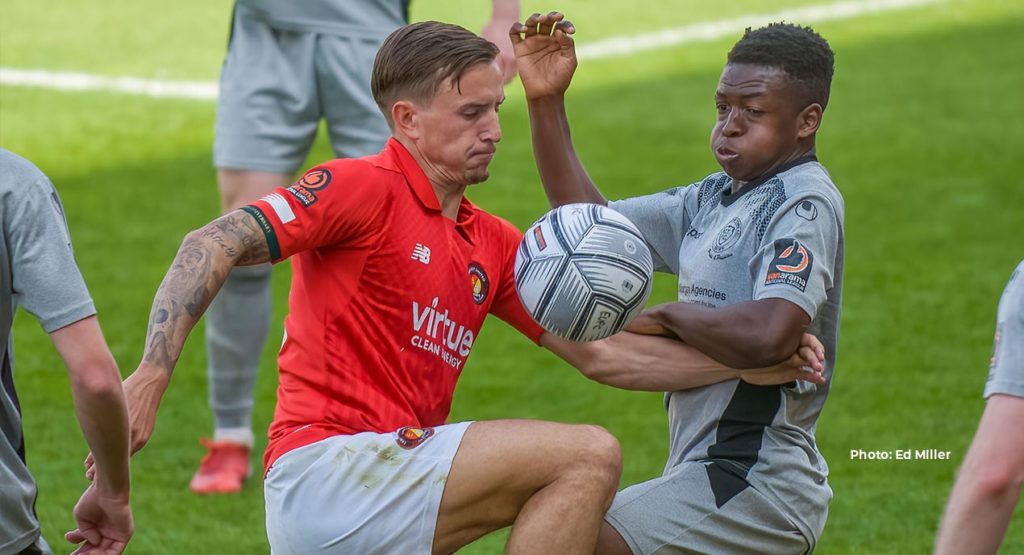 Four goals certainly entertained the crowd in the Kuflink Stadium’s penultimate league game as Fleet came from behind twice to earn a point against a resilient Chippenham whose own desire for a play-off spot of their own shone through.

Elliott Romain was on the scoresheet on his return to the starting lineup and the unlikely figure of Chris Solly – with his second goal for the club – brought the scores level once more.

It was two changes for the Fleet, a straight swap between the bench and the starting lineup for Alex Finney and Romain, coming in for Craig Tanner and Dominic Poleon. Shaq Coulthirst was the first with a sight of goal, however, running through from Christian N’Guessan’s early pass forward before being harried out by the Chippenham defence.

It was a rare piece of play in the box for either side in a slow-tempo first-half as Chippenham strung men across the field to efficiently close down any route to goal for the Fleet. And the visitors almost forced an opening 12 minutes in when Jordan Young nipped through the middle on the break, twisted away from the red shirts around him and fired off a soft shot that nevertheless headed for the bottom corner with Louie Moulden having to stretch fully to get a hand to it.

Tom Mehew had two efforts on goal for Chippenham, his 17th minute speculative effort trying to catch Moulden out of position but not quite hitting the target, with Finney back across to cover. He had another go from distance six minutes later but Moulden found that one an easy take.

The Fleet keeper could do little about the next chance just before the half-hour. The visitors had begun to dig in and venture forward for a couple of minutes when Mo Dabre cut in from the left to supply Joe Hanks on the edge of the box. He hit a sweet effort into the bottom corner and the Bluebirds were ahead.

Fleet responded with Romain in the thick of the action. He claimed a penalty for a push on 32 minutes that the referee showed little interest in and then from a corner, a ball bounced off a Chippenham body with Romain appealing for a handball in the process.

The Fleet’s No.19 then came roaring in on another corner, his header and follow-up twice cleared out of the six-yard box. And then from another corner, the ball was knocked on for Romain again to send the ball inches wide.

Ben Chapman landed a ball into Coulthirst’s path and he got behind the defence but collided with goalkeeper Will Henry coming out to clear but any further penalty shouts were again waved aside by Mr Hughes.

Rakish Bingham delivered Chapman a precise pass for another shot at goal that was blocked before Moulden had to tip over Hanks’ gentle effort on the stroke of half-time.

Unhappy with his side’s first-half showing, Dennis Kutrieb introduced Tanner for Finney for the second-half and within five minutes, the Fleet were back on level terms. It came via a Solly corner, lofted right into the middle of the box and Romain planted a header on target from close range.

Fleet went in search of another on 54 minutes, Bingham and Tanner combining neatly on the edge of the box and the latter inviting Coulthirst to skip into the box only to see his shot saved by Henry.

But before the home side could really impose themselves, Chippenham nosed ahead again. It came on the hour mark via a somewhat dubious corner after Moulden appeared to have kept the ball in play only for the assistant referee to overrule that. And much like Romain’s goal for the Fleet, the delivery into the middle was good and Will Richards rose highest to head it home.

Their tails up once more, Chippenham almost went further ahead on 70 minutes when Luke Russe did well to steer clear of Sido Jombati and his pass to Hanks was fired against the upright and out to safety.

The last 20 minutes was all Fleet, however. Somehow the ball stayed out of the goal on 71 minutes when Chapman’s low cross from the right was smashed on target by Romain, then Bingham and finally substitute Poleon but each time was successfully blocked by a grey shirt.

But the home side did get the goal they deserved on 77 minutes. Tanner’s free-kick towards the far post was met by Solly who timed a run to slide in and convert across Henry for the equaliser.

After that, Fleet did everything but score the winner. Substitute Lee Martin’s incisive strike eight minutes from time looked goalbound but smacked off the post before Chapman got behind the defence again to deliver for Poleon in the six-yard box but the ball was stolen off his toes.

Chapman was the chief menace in the closing minutes and he did it again down the right, providing another excellent opportunity that Martin did well to shoot on target but the in-form Henry was once again equal to it.

Henry was the undoubted star for the visitors in those final stages and he held firm despite the Fleet onslaught to provide Chippenham with another point in their play-off bid, while Fleet will take the fight for third to Billericay this Monday.

Ed Miller has been Ebbsfleet United's communications manager and programme editor since 2014 and responsible for the club website since 2007. Contact him on ed.miller@eufc.co.uk
PrevPreviousPreview: Chipping away at play-off points!
NextBook your hospitality for final gameNext