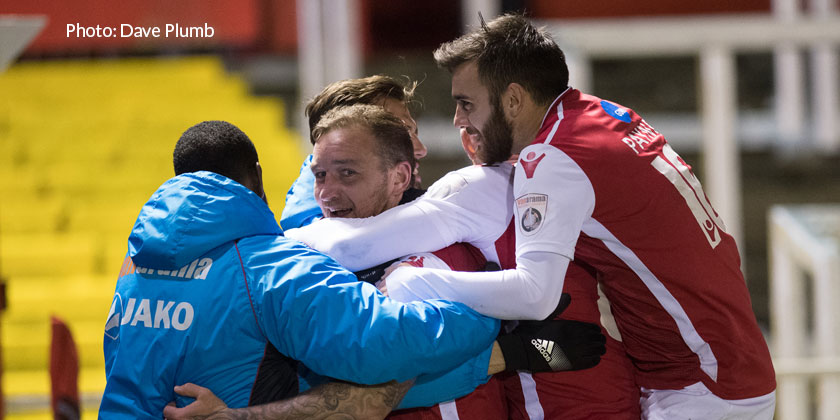 A Danny Kedwell brace closed the gap to the play-off positions to just two points and handed Fleet a third successive win as they deservedly held off Woking to move past the 50-point mark. It was Woking’s 14th visit to Northfleet without a win and they were second best for much of the game though a goal midway through the second half raised their hopes of a point.

Daryl McMahon handed Corey Whitely his home debut and Jack Connors came in at left back, with Myles Weston named on the bench and Lawrie Wilson out injured. And Whitely stood out for much of the first half, his play intelligent, never afraid to attack the men in front of him head-on and linking up well with Kedwell.

After some initial delay when the assistant referee tripped over a photographer and lost his flag, Fleet were soon on the front foot. Within five minutes the right-hand post had denied the Fleet, Luke Coulson jinking his way into space in the box and passing the ball back to Andy Drury who struck it first time against the outside edge of Nathan Baxter’s goal frame. Two minutes later, Whitely nipped in between two defenders to drill a shot just wide before referee Alan Young booked two players in the space of five minutes, Dean Rance and Woking’s Chez Isaac, whose lunge on Jack Payne provoked a mild argument amongst multiple players.

Fleet continued to enjoy the upper hand and on 17 minutes it was Whitely again tormenting the Cards’ back four, getting wide and whipping in a powerful cross that was cleared only as far as Payne whose effort was blocked in the box.

The woodwork also continued to play a big part in the game and Fleet hit it again when Drury’s run brought him clear of the Woking defence near the byline. He found Whitely who sent a looping shot across goal that bounced off the upright.

Next it was Woking’s turn to rattle the goal when a free-kick towards Josh Staunton saw Kedwell slip and Staunton struck the post with Fleet only just clearing it before the loose ball could be fired home by Jonny Edwards.

Fleet’s high-tempo start began to ebb a little, allowing Woking more possession in midfield. The Cards went close again on 35 minutes, Reece Grego-Cox loosing off a shot from close range that Nathan Ashmore had to react quickly to and Sam Magri mopped up the afters.

But as they began the half, so Fleet ended it… and this time got a goal for their efforts. With Kedwell poised on the edge of the box, Magri followed up in support of a deep cross and as he attempted to turn Banton, the Woking wide man’s challenge sent him to the ground and the referee pointed to the spot straight away. Kedwell went for power and Baxter couldn’t equal it, to send Fleet in at the break a goal to the good. It could have been 2-0, however, before the whistle as Kedwell hit a thunderous drive that Baxter pushed behind for a corner and then he and Magri flew at a corner, Kedwell sending a header just off target. 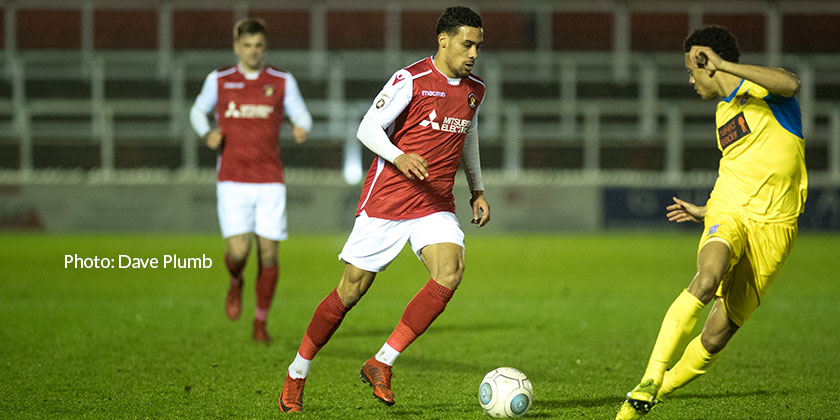 That second goal wasn’t long in coming, however, and it was Kedwell again for his 13th league goal of the season. There seemed scant danger for Woking until the Fleet No.9’s strength held off Richard Orlu before he hit a shot rather lacking in power that deflected to wrong-foot Baxter as the Woking goalkeeper had little other excuse to let it past him.

The visitors made two quickfire substitutions, new signing Louie Theophanous and Charlie Carter, a midfielder with seven goals this season, coming on – and the two combined to pull one back for Woking. That arrived on 62 minutes when Theophanous hoisted a high cross into the Fleet box and the defence neglected Carter who got up very well to send a cushioned header into the top corner.

Fleet looked a little vulnerable for the first time but to their credit refused to sit deep and both sides went in search of another goal. On 70 minutes, the home side were fortunate to escape when a free-kick reached Theophanous and he turned and got a shot away that bobbled around in the six-yard box and just needed a touch before Fleet hacked it to safety. A stretched Woking were twice caught on the break as the game entered its final 10 minutes, with Whitely showing his pace on both occasions. He countered down the left before substitute Jack Powell sent a shot looping over the bar and then back-heeled a ball into Sean Shields’ path that the Fleet winger earned a corner from.

Woking seemed to run out of ideas after that and Fleet were able to break up play in the middle of the park and rely on Kedwell and Drury to run the clock down with a couple more breaks forward.

Ed Miller has been Ebbsfleet United's communications manager and programme editor since 2014 and responsible for the club website since 2007. Contact him on ed.miller@eufc.co.uk
PrevPreviousFleet hope to pick up three of a kind in Cards game
NextGood vibrations keep Keds in the mood for goalsNext