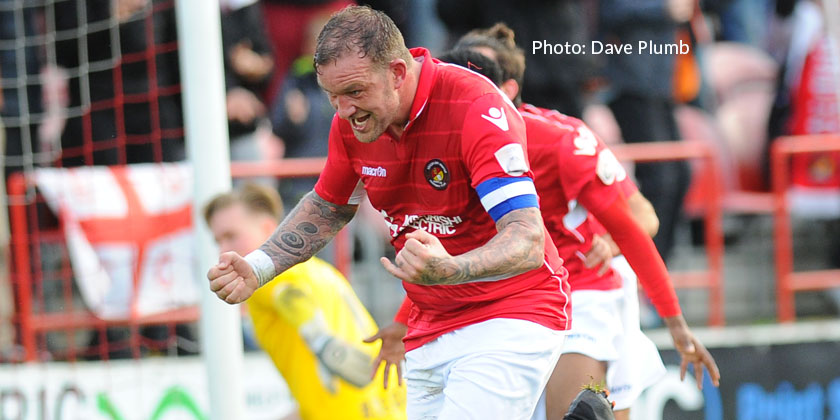 Fleet protected their unbeaten record in 2017 with an astonishing late turnaround to cancel out Weston-super-Mare’s opener, Danny Kedwell scoring on his 100th game 10 minutes from time and Darren McQueen adding the icing to the cake two minutes later.

There looked little cheer on the cards for Fleet fans with Maidenhead winning their game going into the final 10 minutes but the home side dug out a result in circumstances that mirrored the late win at Hemel Hempstead last season.

And Fleet charged into their usual start, taking the game to a Weston side looking to shake off three defeats at home but with a better away record. Bradley Bubb got clear to force Luke Purnell into an early save and Sam Deering also tried his luck inside the opening two minutes.

Deering was at it again two minutes later when Purnell produced a poor kicked clearance and the Fleet winger nipped in and probably should have scored but slipped his shot wide.

Weston were most definitely on the back foot for the opening spell and didn’t register a shot on target until the 11th minute when Fleet failed to clear their lines and a good pass out wide allowed Mohamed Chemlal to slip into space and fire a weak shot at Nathan Ashmore.

Back came the Fleet; Kedwell sent Bubb through on goal and he looked like he might get a shot away before an excellent if somewhat risky tackle by Aden Baldwin thwarted him. On 17 minutes, Fleet fans were on their feet cheering what they thought must be a goal when Anthony Cook produced another curling shot of class as he did with his strike against East Thurrock United and this one was heading the same way until it crashed off the inside of the post and away to safety.

Fleet continued to patiently build up in and around the Weston box and Marvin McCoy found space to advance on goal on 22 minutes but Purnell reached the ball before him and managed to fire it clear. Another chance arrived on 33 minutes when Cook sent a half volley fizzing just over the bar from a Jack Powell free-kick.

But that was the point at which Weston began to up their involvement and they were the better side for the final 15 minutes of the half, getting on top of midfield with the impressive Jacob Cane and Lloyd Humphries able to dictate the pace of the game and play the ball across the park as Fleet sat deeper.

The Seagulls took that encouraging end to the first half into the beginning of the second and they continued to get on top of the home side. Deering did get an early sniff of goal for the Fleet, trapping a ball upfield and cutting inside and outside Jason Pope but his final shot didn’t trouble Purnell as it flew past the upright.

But Fleet’s title challenge was dealt a blow on 53 minutes. Weston captain Dayle Grubb, who has history of scoring against the Fleet, lined up a free-kick from a fair distance out and floated it goalwards. Ashmore managed to get across to it, but it clattered off the post and ran back along the line, crossing it before two Weston strikers in attendance made sure anyway.

The goal rocked the home side and for a period, Weston could have found themselves a second. Five minutes after the goal, Ashmore came for a high ball but it spun loose and Cook had to be on hand to slide across the goalline to clear.

Fleet couldn’t get much rhythm going and save for a Powell shot blocked by the goalkeeper and Drury’s 10-yard effort that flew wide after a good cross from Kedwell, the men in red failed to trouble Purnell. McMahon had seen enough on 66 minutes and made wholesale changes, going 3-5-2 with Dean Rance, Sean Shields and Darren McQueen replacing Powell, Connors and Bubb.

Fleet gradually upped the tempo going into the final 20 minutes though Weston’s confidence in midfield was still high and they always seemed to find a man in space when looking to keep the ball from a Fleet foot. A cross by Shields on 76 minutes produced some last-ditch defending from Weston and as the ball came back out to Cook he managed to send an effort to the far post that Pope scrambled off the line. Two minutes later Drury was well-placed to the right of the goal and a ball landed at his feet which he fired across goal but it slipped narrowly wide.

If there was any glimmer of hope for the Fleet it was that Weston have been vulnerable to late goals in recent games – and it proved their undoing once more.

Cometh the hour (or indeed the 81st minute in this case), cometh the man and captain Kedwell did what Kenny Clark had done before him and found the net on his 100th appearance. With little on for the Fleet, Kedwell received the ball with his back to goal, turned and fired into the corner past Purnell from 20 yards to send Stonebridge Road wild. 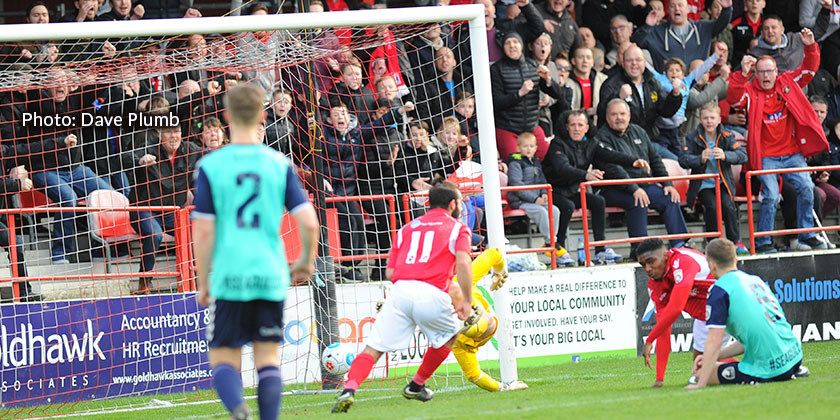 If those celebrations were boisterous, even better was to follow two minutes later. Fleet have won every game in which Kedwell has scored this season and they used that as a platform to carve out another win. Shields got a cross in, Kedwell headed it on and super sub McQueen managed to find enough space and composure to nod the ball past Purnell for a glorious 2-1.

There was still time for this topsy-turvy game to have a sting in its tail and Weston went in search of an equaliser. Purnell’s goal kicks certainly seemed to have accelerated in time taken much to the delight of the home fans while the visitors brought on two strikers to put pressure on the home side. But a late corner aside, Fleet were in no mood to have this three points taken off them and they saw the four minutes of added time out to record a most well-received three points.

Ed Miller has been Ebbsfleet United's communications manager and programme editor since 2014 and responsible for the club website since 2007. Contact him on ed.miller@eufc.co.uk
PrevPreviousPlans for Plough End to incorporate hotel development submitted to council
NextSkipper hails his “best feeling for a long time”Next