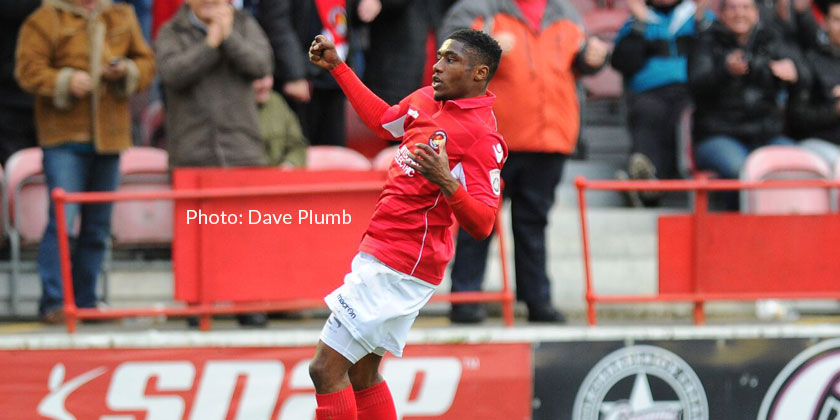 Fleet won a play-off semi-final second leg for the first time since the same result in 2011 en route to promotion – and the opponents then, Chelmsford City, will provide the challengers at Stonebridge Road next Saturday in the 2016/17 promotion final.

A first-half goal this afternoon looked to have booked Fleet’s place in the final early but a fightback after the break by Hampton & Richmond kept the game in the balance until Darren McQueen’s exquisite lob late on sent the Stonebridge Road fans into an outpouring of delight.

Daryl McMahon named the same starting line-up as Wednesday in a bid to avoid the so-called manager-of-the-month curse while Hampton, in search of a goal, surprisingly dropped striker Duncan Culley and opted to play midfielder Nathan Collier up front with Christian Jolley behind him in support. Defender Joe Hicks also came in for the injured Harold Odametey.

Hampton began well but there wasn’t much tempo to either side as they traded possession without looking like troubling the goalkeepers. There was an early scare for Fleet when Kenny Clark went down holding his face but after some treatment on a cut nose, he was soon back into the fray. It was his defensive partner Dave Winfield who had first sight of goal on nine minutes when he beat Sam Howes to a cross but the referee pulled play back for a foul on the goalkeeper.

Aaron McLean fired a Marvin McCoy delivery wide as Fleet began to get their passing game going but some first hints of bad blood began to creep in between Dean Rance and Croatian midfielder Stiven Rivic as the two exchanged full-blooded tackles and Rivic got on the wrong side of the crowd with his continual appeals to the referee.

McLean then had the best chance of the opening half hour when Sam Deering found McCoy out wide and the Fleet full back did ever so well to skip down the flank and play a ball into the box that the No.9, well placed, blazed high over the bar.

Michael Kamara received a caution for a second foul on Anthony Cook on 34 minutes as the off-the-ball incidents continued before Fleet took the lead on 35 minutes from the resulting free-kick. Jack Powell’s set piece to the far post was headed back across goal to Clark whose downward header into the corner evaded Howes and as it crossed the line Drury helped it along – but Clark was credited with the goal.

Deering then sent a half-volley wide as Fleet seemed buoyed by the goal in contrast to a rather sombre Hampton. That said, Nathan Ashmore was called into action on the stroke of half-time to push a Brendan Kiernan free-kick around the upright.

The visitors had to do something after the break and they made a double substitution, the easily ruffled Rivic making way along with Tom Jelley, while on came Jerome Federico and Shaquille Hippolyte-Patrick.

Fleet started the half with another Powell free-kick that Winfield got a firm header to but Howes was equally assured in the catch. After that, the visitors enjoyed a good spell of possession but Fleet just soaked it up without looking too troubled or anxious, though Clark had to block an effort from Kiernan.

But just as the Fleet were starting to get back on top of the game, Hampton delivered the goal that hauled them back into the tie. Powell saw a shot skip wide and then Deering got on the end of an excellent Rance pass but saw Howes make the save. From the goalkeeper’s throw out, substitute Federico broke down the left and although he seemed to have taken the ball too wide, managed to steady himself and squeeze a shot between Ashmore and the near post for the equaliser.

Rance and Andy Drury then took two quick yellow cards for the home side as the play became messy, Fleet trying to clear their lines as Hampton sensed a chance to level the semi-final on aggregate.

McQueen was introduced on 68 minutes with the game getting a little stretched. Deering saw a wicked shot deflected from 12 yards and then Jolley sent a low shot just wide at the other end as the visitors had acres of space to deliver a cross.

Danny Kedwell came on for the last 15 minutes and that gave the Fleet a little more balance, with McQueen having someone to feed off up front. Several times the Fleet threatened to break as Hampton pressed forwards and Howes was down well to block from Kedwell after McQueen laid a ball wide for him. After some sustained Hampton pressure, Clark and Winfield were then just inches away from connecting to a Drury free-kick.

With the game still anyone’s as it entered its final minute, it was Fleet who struck the all-important blow. A free-kick from the right fell for McQueen who snuck in behind the Hampton defence and with amazing composure, the substitute lifted the ball expertly over Howes and watched it drop over the line before wheeling away in delight, having booked his side a place in the final.

It’s Essex opposition instead of Kentish for once, with Chelmsford the visitors on Saturday for a winner-takes-all place in the National League.

Ed Miller has been Ebbsfleet United's communications manager and programme editor since 2014 and responsible for the club website since 2007. Contact him on ed.miller@eufc.co.uk
PrevPreviousIt’s do or die for a place in the final
NextMacca expects “blood and thunder” finalNext